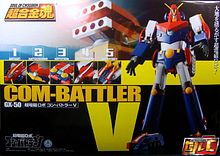 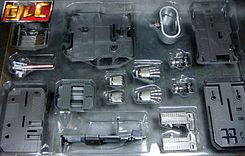 The Battle Tank can’t fly so it needs the Battle Marine to carry it over far areas. A funny thing about the combination, since it’s generated from each pilot’s willpower and consolidated with Ropet the robot’s help, so many things can go wrong with it. For example, if the team’s morale is low or they can’t concentrate, the combination fails (Combattler literally can fall apart). If Ropet isn’t at the Nambara Connection at the time of the Combination, the Combination isn’t going to happen. LOL. Fortunately, Voltes V didn’t have this many hang ups, all it took was a switch and a voice recognition program.

How to attach the Battle Crasher:

Just put in like this and push the chest plates together. This will minimize paint chipping. Comparison with the Gx-03 Combattler. The increased overall bulk is very obvious. The Good
-Clear Canopy windows! Along with detailed c0ckpits and pilot seats sculpted in all of the Battle Machines.

-Practically a brand new toy, almost no recycled parts from the Gx-03!

-The proportions have greatly been improved. 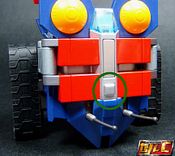 -Longer drills for the Battle Craft.

-Diecast parts include
–Half of the Battle Jet
–Shoulders, chest and torso
–Battle Marine c0ckpit/crotch section and lower legs (not the thighs though)
–Most of the feet

-Sliding parts help lock in the Battle Jet and improves the look of the neck.

The Bad
-Missing Dosu Pressure cutters for the Battle Jet.

-Ratchet joints only in the shoulders.

-The extension parts for the Battle Crasher elbows are really, really TIGHT!

-Attaching the cannon on the Battle Tank might be a problem. The plastic feels brittle and the clasps are tighter than they should be.

-Pulling out the default hands is harder to do than on the Gx-03.

-Battle Tank treads still fall off with not much effort.

The Ugly
The styro tray!

I’ve got to say the new stryo tray could’ve been done better. As is, if the Battle Jet is left in the slot with the whole tray stored standing up and the Battle Jet is pointing directly downwards the Combattler’s antennae will bend sideways like a bug’s! So take note of how you store your Gx-50 if you plan to leave him in the box.

Storing the Gx-50 box flat on its back or upright is okay, standing it up on the sides is not.

In other words, storing in this position is okay.

Storing it like this is not! Unless you know for sure which way the Battle Jet is pointing.

Another thing I find a bit annoying is the “rusty-looking” part on the Battle Craft. But since it’s a magnetic plate I guess the finish on it can’t be helped?

Overall, A great improvement over the Gx-03. The new bulk and more defined look and added features like the release button on the Battle Tank really made a huge impression on me. I think I’ll most likely vote for this as my 2009 toy of the year item.

Tip on how to disassemble the Battle Crasher:

The manual doesn’t explain how so this is the best way I could think of disassembling the Battle Crasher from the Battle Tank. If anyone has a better way please feel free to share.

Look at the back and find the notch, place your thumb there. Push hard against it, trying to force a 45 Degree angle. It should pop free. Previously the Gx-03 Battle Crasher was much easier to detach, just pull the front chest plate outwards, trying to make a 45 Degree angle and it should dislodge.

Funfact: One of the quirks of the show featured the pilots befalling medical problems. Hyoma’s arms were poisoned and his arms had to be replaced with cybernetic ones, Chizuru had developed a heart condition. Talk about soap operas. No invincible heroes here.