The set is actually numbered 1 to 8.

The only Non-Metahuman in the Main 7 (or in this case, Main 8), Batman serves as the brains of the Justice League, always planning for every contingency and situation.

Batman’s left hand is positioned for holding onto things, such as his trusty Batarang. Sadly, no accessories are included with this figure.

You might be able to swap some of the hands around but I don’t recommend it, as it’s a tight fit for the JL Batman which has a slightly smaller peg hole, you might end up ruining or breaking the joint from the other figures.

Hailing from the planet Mars, J’onn J’onzz is the last of his kind, choosing to adopt the planet Earth as his new home. His powers include shape-shifting, telepathy, super strength and enhanced speed and endurance.

Standing at 7 inches tall, J’onn is the tallest figure in the wave.

The design on his cape restricts some of his movements sadly.

J’onn’s left hand can hold items, makes me wonder if he was meant to have any accessories at one point.

Interesting note, only Batman and Martian Manhunter have rocker ankle joints and holes at the bottom of their feet. The rest of the figures in this line all have regular hinge ankle joints and no holes.

The original Green Lantern of Earth in the Animated “Timm-verse” was Kyle Rayner, who debuted in Superman the Animated Series. By the time Justice League was made, they decided to switch to John Stewart. It was a good fit, otherwise the original League would be comprised of all white guys.

John’s left hand looks like it was meant to hold onto his Power Battery, it’s a shame it was not included with this figure. 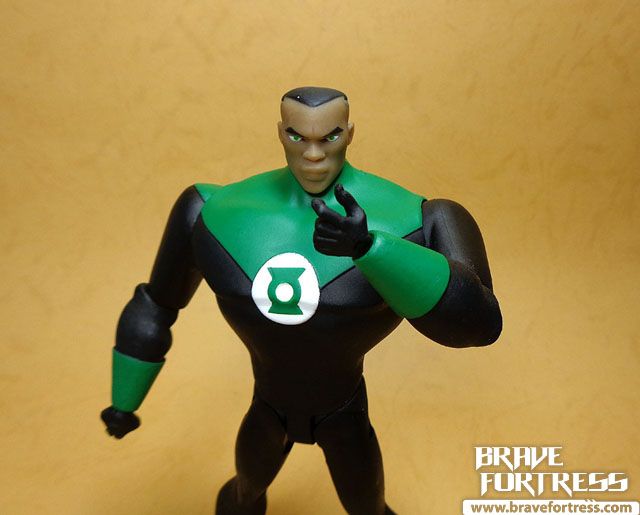 “In brightest day, in blackest night, no evil shall escape my sight. Let those who worship evil’s might, beware my power– Green Lantern’s light!”

Hawkgirl’s hair is wrapped in plastic to prevent from paint transfer while in package. The downside is that her “hair” is very sticky, I think the paint did not react well to the plastic.

Hailing from the planet Thanagar, Hawkgirl’s true motives for joining the Justice League are revealed later in the series.

Note when attaching her wings, the front and back of the wings have different patterns. This is how they’re supposed to look like:

Hawkgirl’s left hand is also open, looks like she was supposed to come with her mace weapon.

It’s a shame this set does not come with her unmasked head. Shayera Hol looked really pretty under her mask.

She has the smallest feet in the set, so she’s a bit difficult to stand and pose without support.

With her “future” husband (in one continuity anyway).

Similar with Hawkgirl, her hair is also wrapped in plastic, fortunately, it isn’t sticky like Hawkgirl’s.

Princess of the Amazons of Themyscira, Diana ran away from home to help save “man’s world”. She later gains her Invisible Jet along with new unlocked powers from her gear in later seasons of the show.

Her left hand is clearly designed to hold her magic lasso of truth, too bad it isn’t included with her set.

I never realized it until now, her outfit never had stars on the backside? At least in the Animated Timm-verse.

Back in the day, when I tried drawing Wonder Woman when I was young, I always thought her chest armor was centered on the front, I guess it’s actually slightly facing upward. No wonder I could never get the image right.

Sigh… paint splash from her earrings on her hair.

I really wish she came with her lasso, she seems incomplete without it.

Same as with Hawkgirl and Wonder Woman, Aquaman’s long hair is covered with plastic to prevent paint transfer.

King of the Seven Seas, Arthur Curry is the ruler of Atlantis. He has enhanced strength and durability due to being naturally used to high pressure from swimming at the bottom of the sea. He can communicate and give orders to sea creatures as well.

His legs are not quite toon accurate, as they are missing fins on his calves.

Aquaman’s hand is replaced by a harpoon when he becomes trapped by his brother Orm and he had to sacrifice his left hand to save his son.

Aquaman originally debuted in Superman the Animated Series, sporting his traditional orange garb and clean-cut look. The producers decided to remake him into a total hardcase for the Justice League, to run a bit more similar with how he looked in the comics at the time.

I find it very curious Aquaman is included in this set, since he’s not a founding member of the Justice League in the Animated Timm-verse, oh well.

Wally West is the fastest man alive! Getting his powers from the Speed Force, Flash can move at superhuman speeds and is the heart and conscience of the super powered team.

Fortunately, the figure can hold a running pose (kinda) without support.

Apparently, in the Timm-verse, Wally is the first Flash, as we are never introduced to the Barry Allen incarnation of the Flash from the comics.

Flash is the funny guy of the team, often the one cracking jokes to lighten the mood when the team is in tense situations.

The Man of Steel, Clark Kent is the last son of the planet Krypton. His animation model was slightly modified from how he appeared in the Superman the Animated Series. He seemed much older than before. But in later seasons, the producers tweaked his look a bit to make him more closely resemble his STAS look. This figure is based on his Justice League Season 1 appearance.

Superman has an open palm for his left hand. I guess this will come in handy when you want to do flying poses with this figure… or handshake poses?

This is a job for Superman!

This is a job for Superman!

I find it very odd that they sculpted his cape with a slight tilt to the left. I wish they kept it straight instead.

JL version on the left.

Overall, it’s not bad, but this set could’ve been so much more. Considering how this toyline started with the Batman the Animated series line, with tons of accessories, extra capes even! Now, all we’re getting is just the figure with zero accessories?? Their hands don’t even match the back of the boxes, so you know they had extra hands in mind. I think the line was rushed so that it could launch with the DC Online streaming service, but it didn’t quite work out so well. It’s all very unfortunate.

Still, it’s the Justice League, a series that will always have a very special place in my heart, so I am very, very happy to get these figures. They look really good together.

A big thank you to my friend, Tim, for helping me get these figures. I owe you, man!