It’s worth mentioning, starting with this release, it seems that Fans Toys is cutting back on “twin layer” styrofoam packaging and just using a plastic bubble top half to hold everything down, which is a good thing, minimizes the package size and helps the environment too. They haven’t applied it yet to all releases (Magnum, Hunk and Dunerunner went back to dual Styrofoam), but I think this is a good direction for the company.

His alternate face is located here, in this canal in the styrofoam.

When first removed from the box, make sure to rotate his legs around. The knees can be rotated below the first purple bar.

Make sure these tabs are plugged in, this will help keep the backpack in check.

It really is impressive to see how Fans Toys designed the way the trailer folds down into this compressed backpack.

Roadking features rubberized tires. So be mindful of that when you leave it displayed in vehicle mode in a hot environment. Too bad it isn’t chromed like Magnum/ Wildrider’s though.

SUPER IMPORTANT
Be VERY mindful of the fact that the soles of his feet are actually the chromed parts of his front grill for vehicle mode. Keep this in mind when you try to pose him (might scratch if you pose without lifting the legs first) and the surfaces of where you place him on (improperly painted surfaces might cause tarnish and/or paint transference?)

A brutal tyrant who shows no mercy, Motormaster leads his team through intimidation and fear. Preying on their insecurities, the rest of the Stunticons follow his orders without question. The team actually hates him as much as they fear him, often leading to psychological instabilities in Menasor mode.

I found it super funny this guy has what looks like two “sad faces” on his chest. Strange design choice here.

To swap his face plate, you have to first remove the halves of his hood.

He comes with his Ionizer Sword.

It’s a shame the sword isn’t chromed like how it was with the G1 toy though.

Thanks to the shoulder butterfly joint, he can hold is Ionizer sword with both hands. 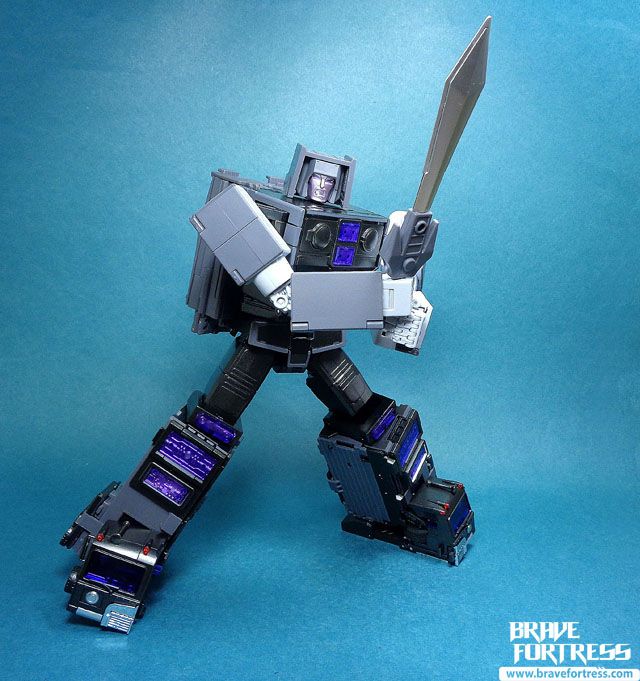 He also comes with his Cyclone gun.

His Cyclone gun is said to be able to generate winds of up to 400MPH.

Transforming him is a HUGE pain. There are LOT of panels and tabs to work with. It’s not impossible but it will try your patience a bit, since tabbing in one place will likely untab something else on the opposite side if you approach it wrong.

You can drop the tailgate for his trailer mode. Very cool.

Lol… you can actually see his head in the trailer. I guess this is the reason why we don’t get a base mode for the trailer.

His gun and sword can be pegged into the bottom of his trailer.

The front section of the truck can even turn! Very impressive engineering. 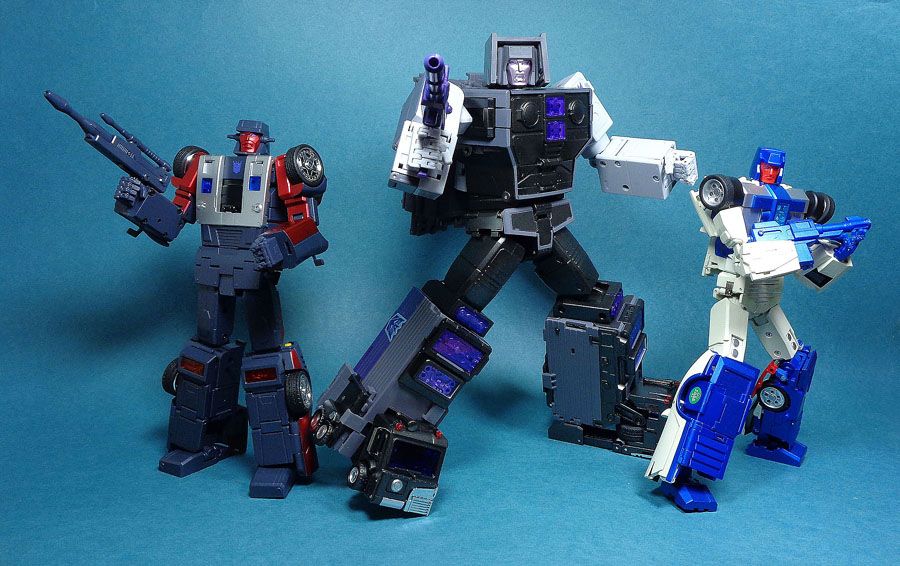 Overall, an amazing piece of engineering work from Fans Toys. How do they do it?? It’s simply amazing how they figure out how to get the trailer all together into the robot mode. Granted this means transformation is a tough thing to get through, but wow! The look of both modes is insane. The feel, heft and presence of this figure is simply top notch! I would’ve liked it if they included his “Roller” from the old G1 toy, but I guess it would be a moot point since it was never part of the G1 cartoon mythos.

I really hope FT can put out the last two figures so we can have a proper full team. I also really hope they don’t mess up with the combined form. A lot of weight is going into that combined form, it’s going to be scary to put together if they don’t get it right.