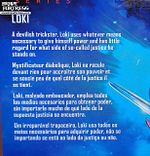 Based on the War Machine Mark 6 suit as it appears in the Endgame movie. This is the armor that James Rhodes wears as he operates as an Avenger following the events of Infinity War. 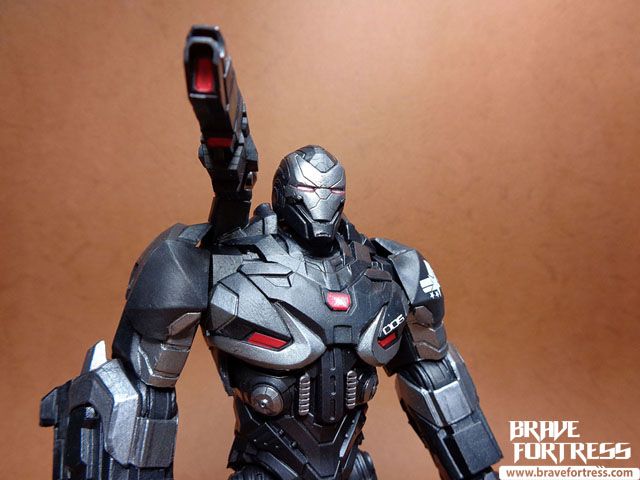 The suit also features an internal walking-aid system for Rhodes following his spine injury after the events of Civil War.

Various cannons are included with the set. It’s too bad we never see War Machine go all out in the movie while wearing this suit (he wears the Mark 7 in the final battle). 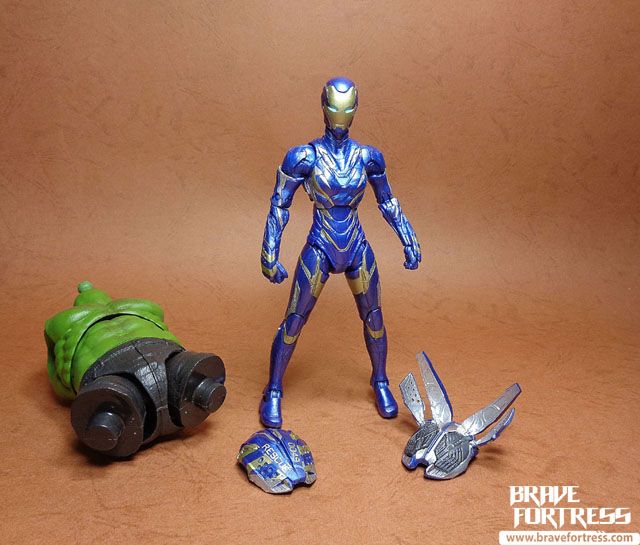 After so many Marvel Movie appearances, we finally get Pepper Potts in an armor suit.

The design for this armor is pretty cool. I think it’s also currently being used in the comics? There was a previously release exclusive Rescue figure for the ML line but it’s not very nicely done and way too pricey for what it is. I’m OK with this as my “comics look” Rescue figure.

I wish this came with an “open helmet” Pepper Potts head. I guess the Pepper head from the Iron Man 2 Mandarin 3-pack will have to do. 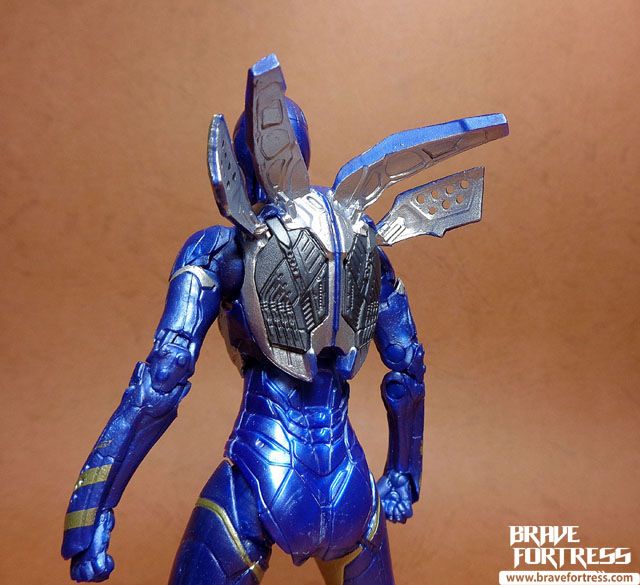 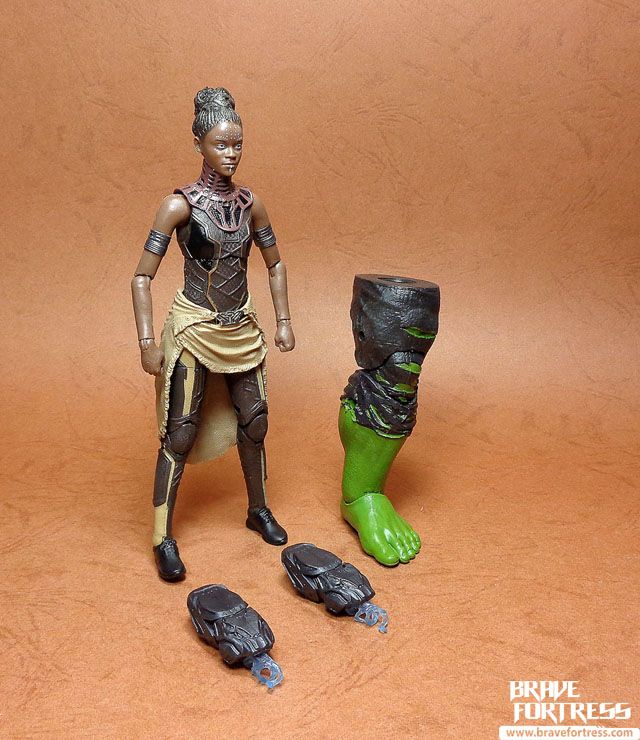 Princess of Wakanda and the little sister of T’challa, Shuri is the leader of the Wakandan Design Group, the scientific division of Wakanda.

Her outfit matches her appearance in the movies but it does limit her articulation by a lot.

She comes with her Vibranium Gauntlets. 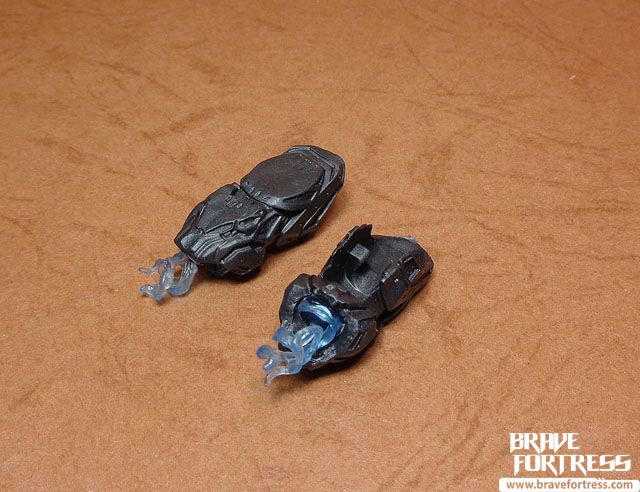 The Gauntlets are of her own design, and are capable of firing energy blasts at her opponents.

First appearing in the Black Panther movie, the gauntlets have been a staple weapon of hers through Infinity War and Endgame.

Recently there have been rumors that T’challa may be replaced in the MCU as Black Panther, with Shuri taking up the mantle soon, just like how it was for a while in the comics, before T’challa came back.

M’Gula is a member of the Serpent Society, like his namesake, he has rock hard bones, skin and muscle that are impervious to high caliber arms fire, explosions and extreme heat. 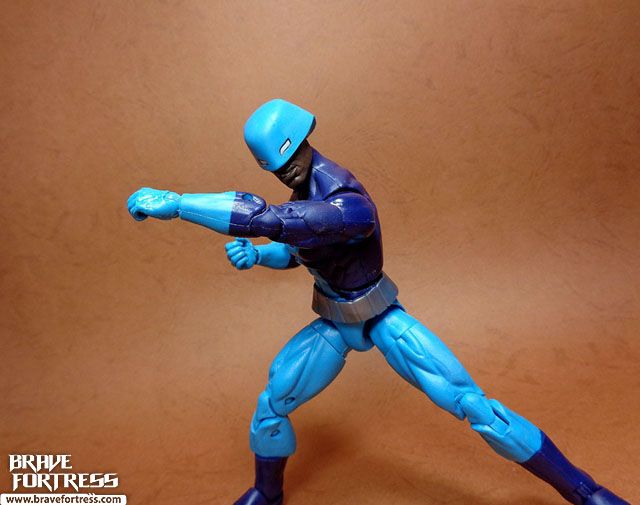 Hmm.. just realized we haven’t really gotten too many African American supervillains in action figure form. I can only think of Thunderball from the Wrecking Crew at the moment. 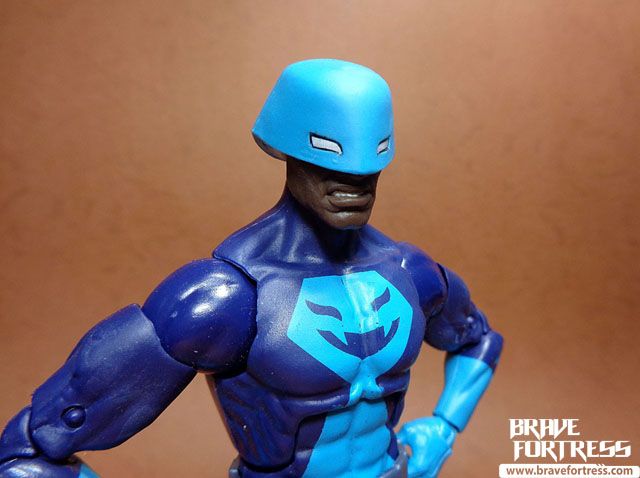 With this figure out, we have another added member to the ongoing Marvel Legends Serpent Society team.

So far:
Madam Hydra (Viper) from the Arnim Zola wave
Constrictor from the Return of Marvel Legends Terrax wave
Cottonmouth from the Onslaught wave
Eel from the Abomination wave
Serpent Society (King Cobra) from the Thanos Infinity War wave James Montgomery Falsworth possessed no super powers, only a bulletproof costume and expert training in espionage and was a superb athlete. Having served in both WWI and WWII, Union Jack is a War Hero and a legend, similar to Captain America.

Holster for his sidearm, a Webley .455 revolver.

Sheathe for his dagger.

As an espionage agent, Union Jack is an expert with hand-to-hand combat and often uses his signature dagger with great skill.

James eventually retires from old age and the mantle of Union Jack is passed onto his son, Brian, who continues the fight against the Nazis in WWII. 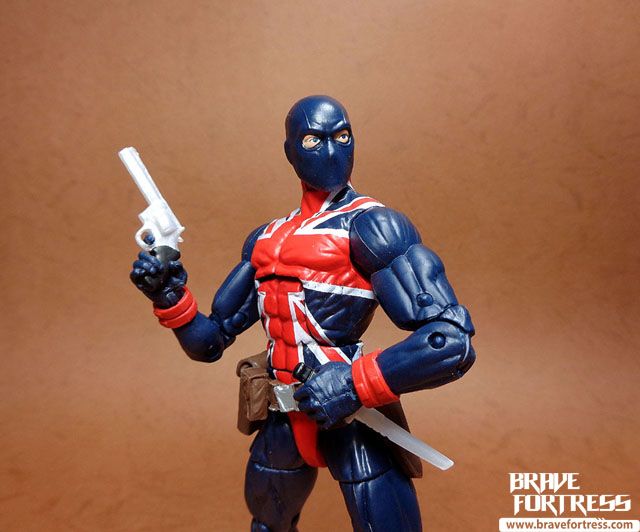 In more modern times, Joseph Chapman, a family friend of the Falsworths, becomes the third person to wear the mantle of Union Jack. 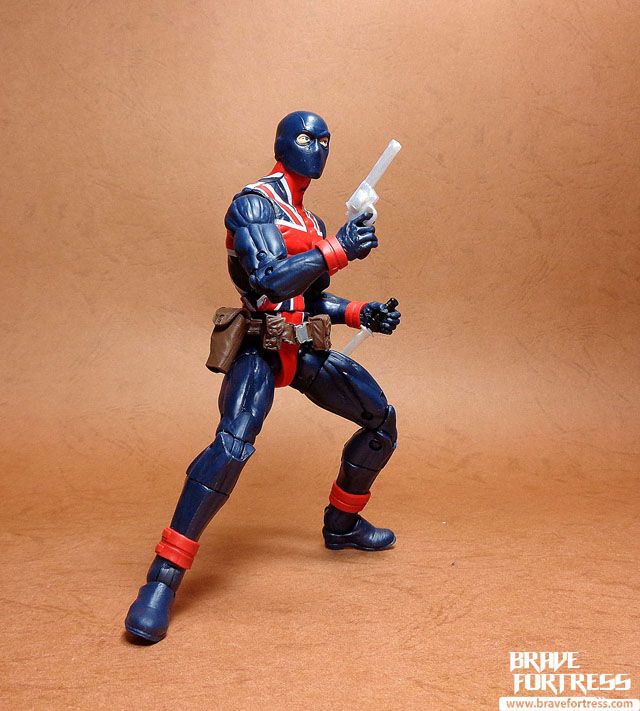 The figure is a very nice update from the previous Hasbro Marvel Legends release, under the Red Hulk wave.

An alien from a nearly-extinct race called the Korbinites, Beta Ray Bill is their champion and is the first non-Norse being in Marvel’s history worthy of lifting and activating Thor’s Hammer. Odin eventually rewards Bill with his own hammer and he becomes a staunch ally of the God of Thunder.

The figure’s jaw can be opened.

He comes with his hammer, Stormbreaker 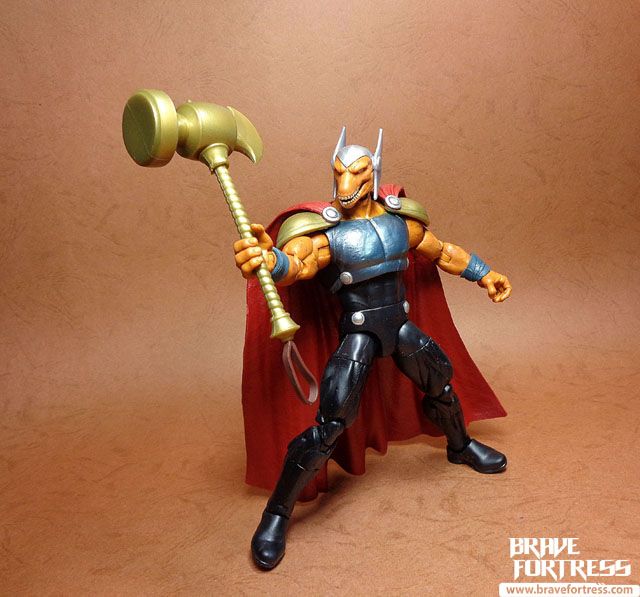 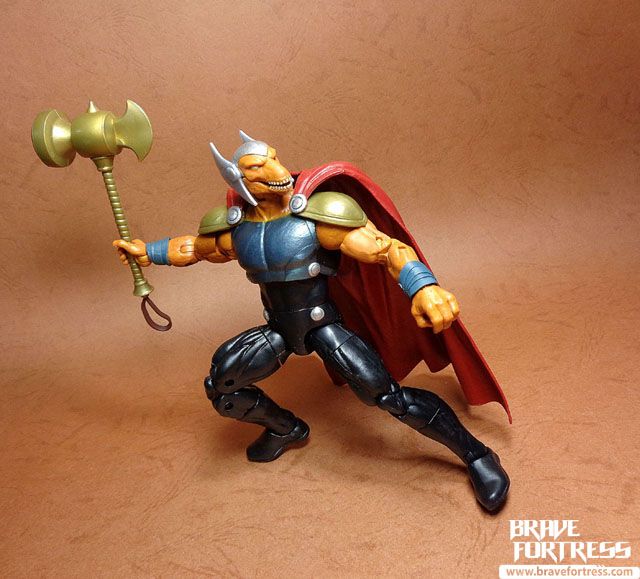 Even without the enchantment of the hammer, Bill is capable of fighting Thor to a standstill.

I laughed out when my wife saw Bill the first time, “what happened to Thor?? Where’s Chris Helmsworth?” Alas, poor Bill. lol… 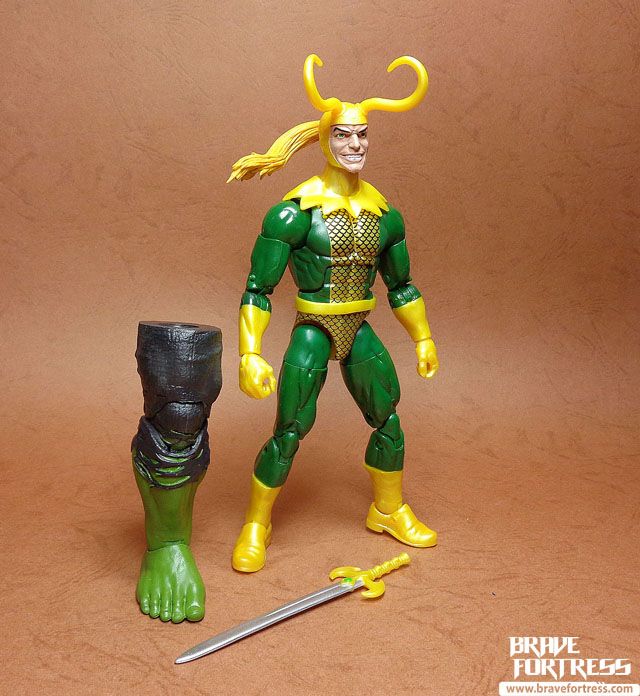 Thor’s half-brother, Loki Laufeyson is a master of manipulation and deceit, often causing trouble for his half-brother out of jealousy while scheming to take over Asgard.

The figure comes with a sword, I’m not sure if this is supposed to be the Twilight Sword?

After so many Marvel Legends waves, we finally get a proper “classic” costume Loki. 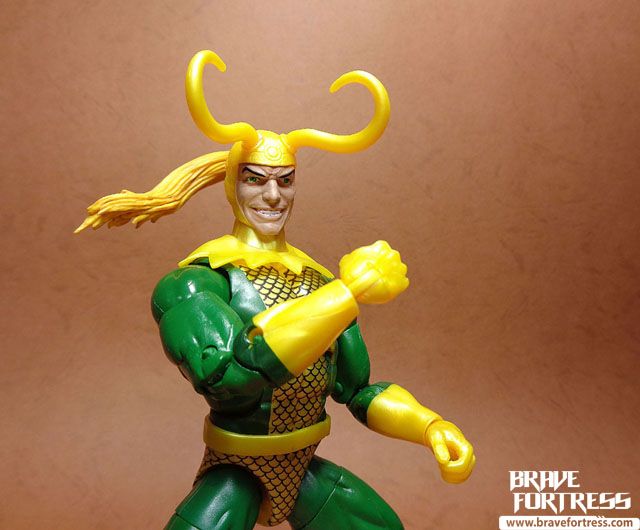 I find it really amusing that they went with adding this collar on the figure instead of new tooling for the torso, I guess it’s more economical? I wish they glued it down though.

Gotta love the headsculpt. That smile makes me think of most politicians. lol.

Based on Hulk’s appearance when they traveled back to 2016 in Endgame, Hulk goes “undercover” as his younger self, and sheds his garments to match his younger look. 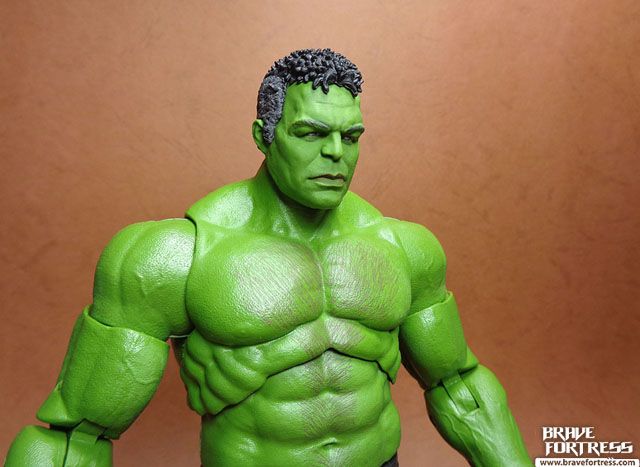 When they first announced Professor Hulk, I thought we were getting Hulk with glasses and a quantum suit, or something more practical, I can’t believe they went back to original half-naked Hulk instead. Seems like a real waster opportunity right here. 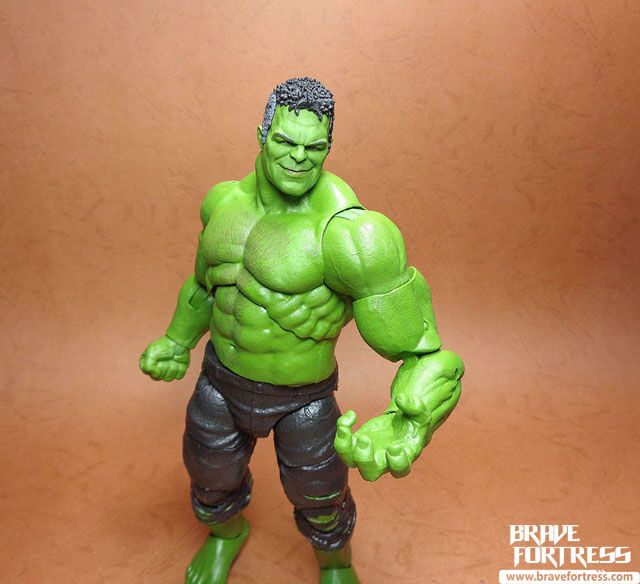 I can’t quite see actor Mark Ruffalo’s face in these headsculpts. They seem a bit off somehow.

I wonder if we’ll ever see a Hulk solo movie again down the MCU road? Seems like Professor Hulk would be something fun to explore.