I love how the cardboard insert features panels from the comic book. Nice touch there, Hasbro.

After dispatching his alien symbiote uniform, Spidey continued wearing a “regular” cloth representation of his black costume. It was during this when Kraven’s Last Hunt happened, so I think the story on the back of the packaging kinda got it wrong.

The figure is a re-release of the Black Costume Spider-man that came from the Sandman wave.

It comes with “new” web-shooting hands (yay?), the previous release only came with “wall-sticking” hands.

Spidey this time also comes with a beat up Peter Parker head. 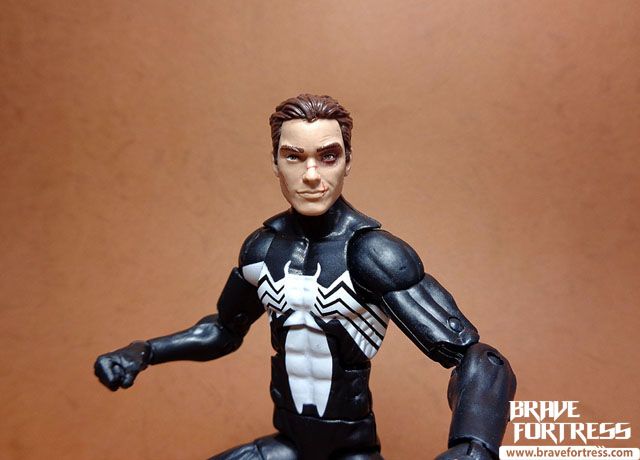 Heh, good ol’ Pete, can take a lickin’ and still keep on smiling.

Sergie Kravinoff is an expert hunter, tactician and hand to hand combat fighter. After suffering multiple defeats at the hands of Spider-man, and faced with his own mortality, Kraven decides to prove his superiority once and for all by hunting down Spider-man and putting him in a coma, while he assumes the latter’s identity and goes on a brutal crime fighting spree

I originally passed on this set since I really didn’t like the crazy sneer on Kraven, but eventually relented when this was later offered on discount at a local shop and after realizing that he sported the more classic costume, which would be an ideal fit for a classic Sinister Six setup.

The previous Kraven figure was based on his more modern costume. It was released as part of the Rhino wave.

He comes with his usual spear.

Kraven also comes with a sniper rifle. I think this is based on all-new tooling? I don’t recall any Legends figure ever coming with this accessory. Cool.

After finally realizing he wasn’t better than Spider-man, Kraven took his own life. Only to come back later on after being resurrected by his family. Only in the comics, eh?