In the “Spider-man: Far From Home” movie, Peter gives himself an upgraded Spidey-suit while onboard the Stark Industries Private Jet, using the Suit Synthesizer Suite. The upgraded suit no longer has the spider drone on his back, instead having a parachute in its place. It also features improved defense from ballistic attacks and new “Web Wings” used for gliding. The suit also has boosted power levels for his taser webs for taking out drones.

Sadly, the actual figure does not have the Web Wings included.

The original suit featured various types of web firing gimmicks, such as Web Grenades, and Splitter Webs. It’s not revealed if the new upgraded suit carried over these gimmicks. It does seem to have the Taser Webs still in its arsenal.

While working at Stark Industries, Quentin Beck created a system that could create holographic projections. Stark named the system the “Binarily Augmented Retro-Framing” or B.A.R.F. for short, much to Beck’s displeasure.

As Mysterio, Beck pretended to be a hero from another dimension, and gained the trust of Spider-man and some members of SHIELD, (spoiler! which later turned out to be Skrulls). Makes me wonder if the real Nick Fury would’ve fallen for the ruse?

Mysterio’s holograms and drones made it look like he was capable of flight and firing energy blasts whenever he “fought” the elementals.

Somehow, I got more thrills watching Spidey take down Vulture in the first movie than how things went down with Mysterio in the climax of the second movie. I guess it could be due to having the action shift in between Spidey vs Mysterio and Spidey’s classmates running for their lives.

Despite not having any real enhancements on this new suit, its still pretty durable, capable of taking bullets from Mysterio’s drones and protecting the wearer inside the suit.

I think the Stealth Suit only fires regular webs and doesn’t have the fancier web gimmicks of the other versions.

Instead of automatic lenses like on the other suits, the Stealth Suit features flip-up goggles for when Spider-man needs to adjust his vision.

Thanks to Peter’s best friend, Ned Leeds, covering for Pete, he coins the name “Night Monkey” for the Stealth Suit, it ends up sticking and the world recognizes the new hero, not realizing it’s really Spider-man inside the suit.

Personally, I’m not too crazy with this design. It really just makes me think of a gimp suit instead of something stealthy.

Morris Bench was knocked into the ocean by Spider-man while the latter was battling Namor while an experimental generator was being tested. The strange combination of the ocean bacteria and energy from the generator gave Bench the ability transform any part of his body into water.

While Hydro-man has incredible power, he doesn’t have the brains to use them fully, often happy just functioning as a henchman for criminal bosses.

Hydro-man can also turn his liquid body into “solid-water” capable of smashing through anything with solid force. With enough concentration, he can even turn himself into steam.

I really wish they included “normal” arms for this guy, it would’ve been nice to make an Eddie Brock (Venom) alternate figure out of the buck. As is, the figure’s “water arms” are a bit limited in terms of poses, as the elbow joints can’t do 90 degree bends, and the forearms are quite heavy, making the arms drop when you try to pose them upwards.

Hydro-man was once a member of the Sinister Syndicate, lead by Beetle, Bench worked alongside Speed Demon, Rhino and Boomerang. The group functioned mainly as a mercenary team to criminal bosses, as opposed to the Sinister Six, which only actively sought out to destroy Spider-man. 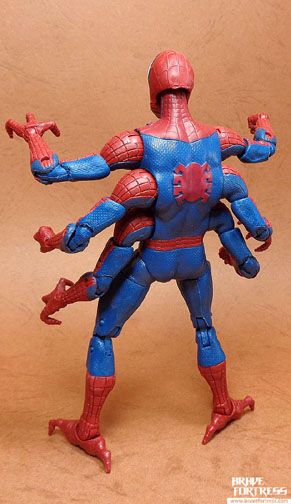 Created by Magus as an evil monster counterpart of Spider-man alongside other evil doubles of the Marvel heroes during the Infinity War saga, the Spider-Doppelganger doesn’t seem to have any real intelligence and functions purely on instinct.

The Spider-Doppelganger was the only survivor after the events of Infinity War, thanks to Demogoblin infusing it with supernatural powers which allowed it to remain on their world after the other Doppelgangers were sent back to whence they came.

As with the other Doppelgangers, the Spider-Doppelganger is said to be much stronger than Spider-man. The creature possesses all of Spider-man’s powers plus it has claws and razor-sharp teeth, his organic webbing is also razor sharp, capable of being used to shred his opponents.

While totally mindless and incapable of speech, the creature forms a bond with the villainess, Shriek, and allies itself with Carnage whenever the villain appears.

Julia was given powers as part of an experiment by the government, where she was “accidentally” injected with a chemical cocktail of spider venom and plant extracts, giving her powers that can mimic Spider-man’s.

As Spider-woman, she uses psionic energy to spin webs and cling to surfaces. She can also control the movement of her “webbing” thanks to their psionic properties. She later becomes the new Madame Web and gains the power of telepathy and precognition but at the cost of her eyesight.

The set comes with a spare hand with webbing fixed to it. 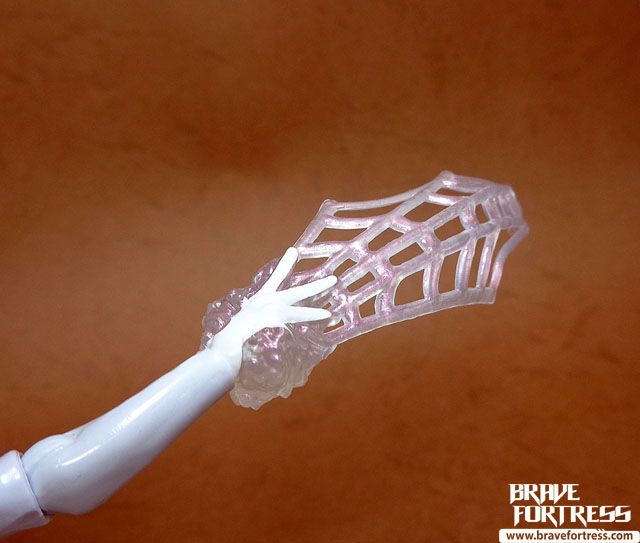 Being trained as an agent by the Commission on Superhuman Activities, Julia also has espionage skills and is very adept in hand to hand combat.

I remember quite fondly Julia as she appeared in the 1994 Iron Man animated series as a love interest for Tony Stark. Heh, I always had a thing for redheads even back then. I preferred this incarnation of Spider-woman instead of Jessica Drew.

Mac Gargan originally worked as a private investigator for J. Jonah Jameson, after agreeing to don a suit created by scientist Farley Stillwell capable of stopping Spider-man, Gargan becomes the supervillain known as the Scorpion, who becomes more mentally unstable the more he uses the suit.

I don’t know why, but I keep seeing actor Timothy Olyphant in the headsculpt. Maybe it’s the brow and the grin? Pretty cool though, I can see him as the Scorpion if they ever decide to bring the Scorpion into the MCU.

The Scorpion suit is actually an armor.

The tail is cybernetic, and can be used to smash objects or inject poison into its target.

The Scorpion was always one of my favorite classic Spider-man villains. Though I think I still prefer the old Toybiz version since that one seems more bulky.

Originally introduced as an elemental from another world that Mysterio was trying to stop, it’s later revealed that the creature is actually a hologram and that several drones are inside the projection making things happen.

The “metal rod/ steel girder” is supposed to be plugged into his left shoulder.

You can also place it in his hand.

Ugh… easily one of the least interesting BAF figures from Hasbro’s line. I would’ve rather they made a BAF Ned Leeds instead of this mess.

When they first announced Molten Man was going to be in the film, I had hoped that it would be Mark Raxton from the comics, too bad, I really loved that character as his journey showed that there was redemption for reformed supervillains, not something you see a lot of in the comics. Instead, we get this thing. Oi….

He’s not even impressively tall.

I have to admit it was pretty cool seeing Spidey take on this thing with Mysterio, one of the cooler moments from the movie.