Gambit was actually my favorite X-man back in the day (not that I read any of the comics, I became familiar with the team from the cartoons and X-men vs Street Fighter games), his roguish charm, coupled with his ability to charge up and throw any object into an explosive was cool. That plus Rogue also had the hots for him.

A former member of the Thieves’ Guild and one-time ally of Mister Sinister, this Cajun has a checkered past, resulting in some of the other X-men not fully trusting him.

Gambit’s mutant power is the ability to charge any object he touches (technically called “Kinetic conversion and acceleration”) and throws them as explosive projectiles. He usually prefers using playing cards as they are handier to carry.

On a personal level though, I do prefer the cloth trench coat of the old Toybiz figure, this new plastic coat gets in the way of poses sometimes.

Apparently, one of Remy LeBeau’s secret powers is “superhuman charm”? That’s a thing?

Dr. Henry Philipp “Hank” McCoy is one of the founding members of the X-men Superhero team. Hank wasn’t always a blue, furry mutant. As a result of an experiment to get rid of his mutation gone wrong, his physical condition became even more beast-like in appearance.

Despite his beastly features, Hank actually possesses genius-level intellect and is one of the kindest souls on the team

Heh, I just realized, they never included him in any of the Capcom fighting games. I guess they didn’t want him being confused as a blue Blanka?

Aside from the X-men, Beast is also one of the prominent members of the superhero team called the Defenders.

Thanks to his big, clawed hands, Beast can also climb most surfaces with ease in the comics.

Wolverine (aka Logan, aka James Howlett) wasn’t born with Adamantium claws. He was kidnapped by the Weapon X program and they grafted the fictional metal onto his skeleton in an extremely painful process that would’ve killed anyone who didn’t posses his level of healing factor.

While under the Weapon X program, Logan was subjected to brutal physical and psychological trauma, brainwashing him and turning him into a brutal killing machine with no remorse. It was only later, when he managed to escape and encounter the Hudsons, members of Canada’s superhero team Alpha Flight, was Logan slowly able to regain his humanity.

Lots of doodads here. The hoses can be unplugged.

This Nintendo Virtual Boy VR set is going too far!

Is it just me, or does anyone else see an angry Robert De Niro in this headsculpt?

Personally I think the old Toybiz version did it better, at least that one came with the dunking tank for Weapon X to chill out in….

Forge (no last name?) is a Native American and one of the X-men’s brightest technicians, capable of inventing almost anything he can think of (that’s his mutant power, I guess?).

Forge is also a skilled marksman, usually preferring to use rifles and pistols in combat.

For the longest time I can remember, Forge was often romantically linked to fellow X-man, Storm. But eventually, they fell out of sorts and she would later go on to marry Black Panther.

Being gifted with genius-level intellect and a keen, inventive mind for technology, Forge is the one in charge of upgrading the X-men’s weaponry and defenses around the X-Mansion

He also comes with a pistol sidearm.

While joining a tour in the Vietnam War, Forge lost some of his limbs due to a bombing run, he would later create cybernetic replacements for his lost right arm and leg.

Clarice Fong Ferguson is known as the X-man, Blink. However, this version of her is based on the Age of Apocalypse alternate reality from Earth-295, where she is a more seasoned hero and is the adopted daughter of Sabertooth.

Similar to her mainstream Earth-616 counterpart, Blink can still teleport large groups and even objects.

She also has refined her energy javelin projectile ability better than her mainstream counterpart. Not only can she generate and use them as throwing weapons but she is now able to charge them up before throwing them to make them teleport anyone or anything they touch.

Since her world of Earth-295 was erased after the X-man Bishop time-traveled and undid the assassination of Professor X, she now hangs out with the superhero group called the Exiles, which is comprised of other heroes from erased universes who help in fixing broken realities.

Jubilation “Jubilee” Lee is the daughter of rich Chinese immigrants, after her parents were killed, she ran away and encounters the X-men. She later has several adventures with Wolverine and becomes his unofficial sidekick.

Jubilee’s powers include generating pyrotechnic plasmoids that are similar to fireworks, they can move or be reshaped by her mentally and detonate explosively on her command.

Another of her powers is the ability to block mental probes, even from Sentinels, plus she is immune to telepathy.

The set comes with a “blowing bubble gum” head, as that was one of her traits in the comics. Yes, very “80’s”

For her “bubblegum blowing” alternate head, her visor is not fixed in place and can be removed or placed differently. Pretty cool.

Due to her upbringing in a privileged life, Jubilee is accustomed to certain luxuries, often complaining to Logan when they travel together.

Comparison with the “modern” Jubilee Build-a-figure released a while back.

Skullbuster is actually an alias used by three different people over time (the third and latest being a woman), all of whom have been members of the cyborg criminal group known as the Reavers.

While the cyborgs possess no real powers of their own, they do have access to sophisticated weaponry and are implanted with on-board tracking and targeting computers.

Skullbuster also has implants which allow for him to absorb and redirect energy attacks.

Weapon can be holstered on his right thigh.

Not much is known about the original (and second?) Skullbuster, other than the fact his real name was never revealed and he was often just a background character whenever the Reavers were featured as a crew.

An alternate Murray Reese head is included with the set, so you can make an additional Reaver member.

Same as with Skullbuster, Reese is a cyborg and often used only as a backdrop character with not much shown regarding his backstory.

I’ve seen pictures online of folks using the Reese head on the Marvel Legends Nuke (from the ML Civil War Giant Man wave) body. I think it would indeed be a better comic-accurate fit with that torso than using Skullbuster’s. I might have to track an extra Nuke figure down.

Caliban used to be a frail and small mutant member of the Morlocks who had the ability to sense and track other mutants, along with the ability to manipulate fear into psychic terror.

After joining and betraying X-Factor to Apocalypse, the latter augmented Caliban’s body to become one of his Four Horsemen, Death, replacing Archangel who had returned to the X-men.

As Death, Caliban gained great strength, but is under Apocalypse thrall, following all of his orders without question. 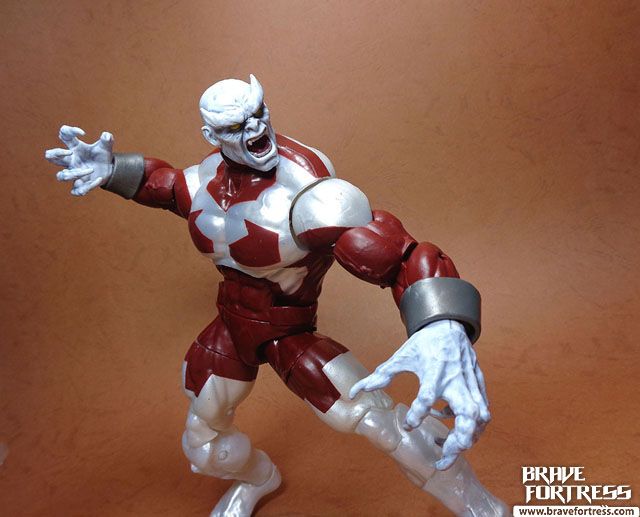 Caliban’s body was so impressively strong, he even defeated Sabertooth, broke his back, and defeated the latter again when he recovered from his back injuries.