Ran Mori (Rachel Moore in the English translated version) is Shinichi Kudo’s childhood friend and romantic love interest in Detective Conan. She and her father, Kogoro Mori (Richard Moore) are oblivious to the fact that Conan is actually Kudo and is really the one solving cases while using his voice changer bow tie and posing as “Sleeping Mori”.

I don’t know, something seems off about the sculpt. I guess this is one of those moments where 2D doesn’t translate well into 3D?

Surprisingly, she isn’t a Tamashii Website Exclusive figure. I guess Detective Conan is popular enough to carry this figure into mass retail?

In the series, Ran is a Martial Arts Champion, often winning tournaments in her favorite sport, Karate. She’s also extremely lucky, always winning lotteries for fancy dinners and lucky draws for free trips out of town. 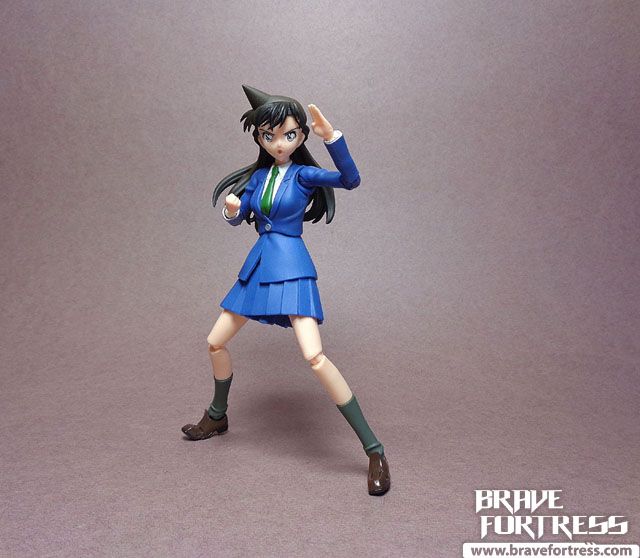 Ran is also a bit of a tomboy, so she’s a bit clumsy and has trouble expressing her true feelings to Shinichi.

I really think the scale is all wrong though. This is how they should look together. I think the Figma Conan is a better fit for the S.H.F. Ran figure. Oh well…

Sigh… the scale is even more obvious when they’re this close. Bummer, Bandai.

In the series, Ran is totally clueless about Conan’s true identity (he poses as the son of a family friend who’s parents are always out of town) and she sees Conan as a little brother, so she dotes on him a lot. Even taking a bath with him in one episode (oh, Shinichi, you sneak!)