Beralios’ alternate head is stored intentionally skewed at 45 degrees in the tray.

Story
Set in the Year 1995 (series aired in 1979), Earth has been invaded by the aliens known as the Akrons. Our main hero, Kento Tate, encounters the Helian scientist Doctor Earl, a refugee from another planet that was also attacked by the Akrons. Kento is forced to pilot the Robot Atlaus which combines with the cyborg lion Beralios and the Gunper (piloted by his friend Hiiragi Danji) to form Daltanious.

Helian scientists cloned their kings to originally serve as “organ donors” should there ever be an accident and spare organs were needed to save the life of royalty. But due to corrupt officials, the true king, Harin, was swapped out and secretly replaced by Kroppen, a clone of the king, who would serve as a puppet for the corrupt officials (taking a page from Alexander Dumas’ “Man in the Iron Mask”. Daltanious’ name also supposedly originates from the Three Musketeers’ D’artagnan )

Close to the end of the series, Kroppen finally accepts the reality that he is the clone and gives his life to save the true king, Harin, who suffered a mortal wound while under attack from the Akron. Daltanious faces off against Emperor Dolmen (of Akron?) in the final battle, who is also revealed to be a clone himself of the true Emperor. This final twist in the story didn’t really have much impact as Dolmen is only revealed in the final episodes of the show.

Piloted by the Helian prince, Kento Date, the Atraous is the only humanoid mecha unit in the team.

For those curious, yes, this part of the Atraous arm is also two-toned on the original Gx-59.

Gatling Flasher (forgot to take a pic of this, using Gx-59 image as placeholder).

Requires removing the default pieces on his arm and swapping them out with the shredder ones.

The unit sporting the most obvious change from the original Gx-59 Daltanious figure, Beralios has new chromed sections and “retro-styled” lion head, all to recreate the vintage Popy Daltanious figure’s look.

Bandai included an optional “show accurate” head for folks to swap around, in case the vintage toy look isn’t your cup of tea.

Piloted by Kento’s best friend, Hiiragi Danji, the Gunper functions as a support unit for Atraous, as well as a stand-alone airborne attack unit.

Gunper Cutter (the chrome blades need to be manually attached)

Handle bars for Atraous (Atlaus can’t fly). These need to be manually repositioned.

Daltanious actually forms up about 5 episodes late into the series. Kento is mortally wounded in the Atlaus and is magically healed. This realization leads Doctor Earl to Kento’s true lineage and starts to call the young boy “Kento-Sama” (Master Kento).

Created by the scientists of the planet Helios, Daltanious is brought to Earth by Doctor Earl to find pilots in order to save both planets from the invading Zaar Empire of the planet Akron.

You can opt to swap out the lion head anytime, even in combined form, just simply plug in the connectors into the clasps.

To make things easier, equip the handle first, then slide in the rest of the crossbow.

The arrow end can be removed so you can slot the arrow into the bow.

The crossbow actually features a nifty pull back mechanism for the bow, just pull back on the left hand handle and the bow will retract.

Cuff parts need to be swapped out.

The shield will require this handle to plug in for Daltanious to hold it. 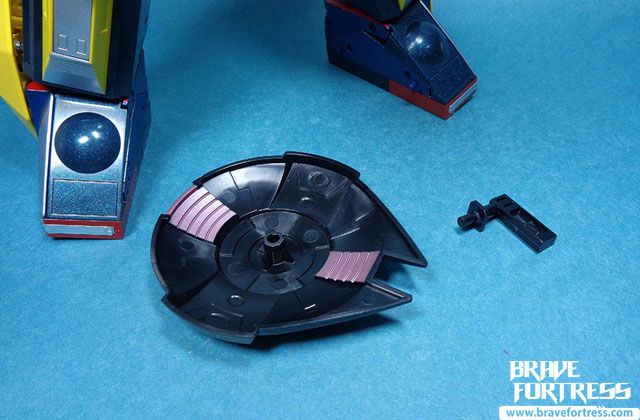 KAEN KEN!
You have to remove the handle before inserting it into the fist.

Later on, Daltanious gets an upgraded version of the Kaen Ken, it now spawns from Beralios’ eyes into the sky instead of its maw. A rolling flame attack before the Cross Slash is also added (similar to Voltes’ Chodenji Ball “setting up” the V-slash)

Unlike Combattler, Voltes or Daimos, in the Daltanious series, Daltanious receives weapon upgrades after Doctor Earl and one of the kids discover a new way to improve Daltanious power output. Daltanious never even needed to get beat up first by a more powerful enemy, no dramatic, suspenseful build-up. The writers just decided to write in the upgrades for no reason whatsoever..

Transformation Notes
-Flip out “horns” on the Dal Fighter head.

-Daltanious’ forearms can be stored in the Gunper just like in the Anime.

-Beralios’ tail is supposed to be folded up like so when returning him to the tray, likewise, make sure the plates for the Tran Shield and Saber are relocated on his hips before putting him back in the tray.

-When returning the forearm pieces on Atraous, make sure they line up right, with the smaller piece located at the elbows, otherwise it’s going to look awkward.

-Always remember to remove the dorsal fins on the Gunper in the combined mode! Lol… I totally forgot about this, so in most of the photos you will see it still attached. Whoops. Apologies…

The lion head even gets a mount for you to put onto the display stand. Pretty neat. 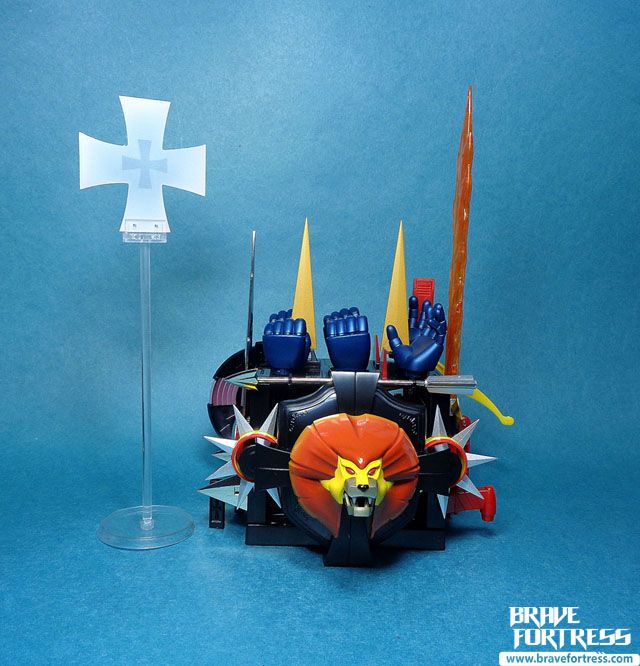 Comparison with the original Gx-59

Hmm for some reason, the clear parts on my Gx-59 have started to discolor. They’ve never been displayed and only taken out of the box for the original review and occasional group shots. Yet, the discoloration is pretty bad. They’re stored in a dry cool place. I have yet to check my second Gx-59 but has anyone else encounter this?

The ankle joints for Atlaus on the R version are much tighter. The ones on my Gx-59 are all over the place.

The Rai Thunder on the R is shipped disassembled and has a brighter yellow to match the tone of the R version.

Likewise, the shade of yellow on the Gyro Spinner’s plastic is different from the original Gx-59.

-OK, you gotta admit, it’s very, very impressive how Bandai was able to trim down the size of the box while adding new stuff in there. Goes to show it’s all about positioning and placement.

-It was a nice touch of Bandai to include the option to swap out the Beralios heads and not only give us the vintage head.


The Bad
-Originally, Bandai did an innovation back in the Gx-59, the tray cover had flaps so you could lock the cardboard cover onto the styrofoam, for whatever reason, they dropped the concept here. Strange…

-Some parts removal/adding needed for the transformation.

-Possible fading on the metallic red paint on the crosses over time? Not too sure about this.

Sigh… Bandai QC is really slipping, bad tarnishing on the chromed thigh on my R Daltanious right out of the box. C’mon Bandai, what are you doing?

Overall, a decent R version, at least we get something new added to the toy. All the bells and whistles from the original release are still here. Although personally I still prefer the original since the colors on that one are more show accurate. The way the engineers managed to figure out where to reposition things so that the overall package would be slimmer is really something (hats off to that design team). If you’re looking to get an extra Daltanious to display “volted out” next to your original Gx-59, then this is a good way to do it.

Personal note: As I mentioned, in the original Gx-59 Daltanious review, just a headsup if you plan on watching the Daltanious series, it isn’t as good as Voltes or Daimos. Most of the character interaction scenes are a bit annoying, mainly due to so many of the supporting cast being small kids. The Voltes character scenes seem more grounded and less silly by comparison.

Funfact – Tadao Nagahama, the creator and director of series such as Voltes V and Combattler V, and director of Tosho Daimos, was also involved in Mirai Robo Daltanious as art director, hence the strong similarities for the character designs. He was also the director for the later episodes of Yuusha Reideen.

Funfact 2 -Tadao Nagahama was also involved in the direction of the theme songs for both Voltes V and Tosho Daimos. He passed away at the age of 43 from Hepatitis.

Funfact 3 – World Events Productions initially wanted to order Mirai Robo Daltanious to make into Voltron. Thanks to a misunderstanding due to WEP ordering “the one with the lion”, Toei Animation shipped Go Lion instead, and this became the Voltron series we all know.