Similar to the Megazord and the R Godmars, this release comes with an additional layer of plastic cover on the styrofoam tray. 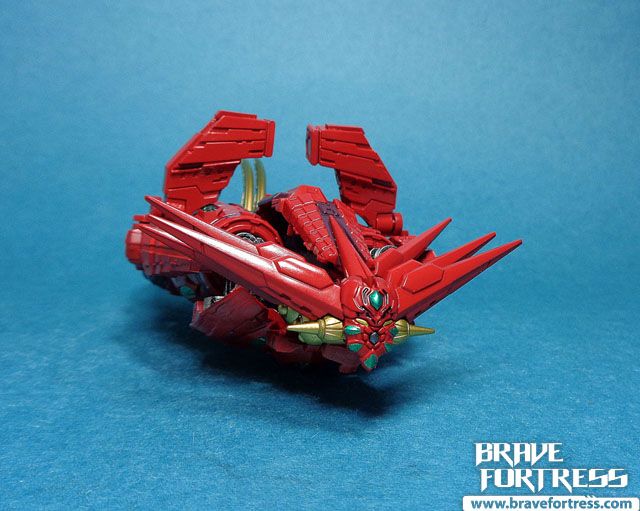 In the Getter Robo Saga Manga, each Getter ship is shown to be the size of a planet. Aside from being able to fire intense Getter beams of incredible energy capable of destroying planets, each unit can generate its own defensive barrier using Getter energy, making them impervious to any and all damage from enemy attacks.

For the unfamiliar, the Getter Emperor is meant to be the final form of the Getter Robo through hundreds of years of evolution. The exact origin of which Getter Robot the Emperor came from (G, Shin or something else entirely) is a mystery, but over the course of hundreds of years, the Getter Emperor has grown so large and powerful it becomes the size of a very large planet and even gains sentience and limited omniscience due to the cosmic Getter Rays. It can easily manipulate space time, travel across into other dimensions and even destroy subspace. Due to the massive size of the Getter Emperor, it can generate its own gravitational field, even weaponizing the said gravity field to destroy its opponents.

Only the Getter 1 form was ever shown, since with each transformation, the Getter Emperor generates and releases energy greater than that of the Big Bang, alluding to the fact that repeated transformations would probably destroy the universe.

Due to the nature of the Getter Rays and their ability to press evolution, the potential for the Getter Emperor is limitless, as it can store and generate its own Getter Rays, it keeps growing and expanding, to the point that it even grows to the size of a galaxy and eventually the size of a universe in the far, far future.

To equip the Tomahawk, there’re two official ways to do it.
1) Peg the fist directly into the shaft handle.

2) Alternately, flip down the clip and snap it onto the regular fist for easier access and removal. 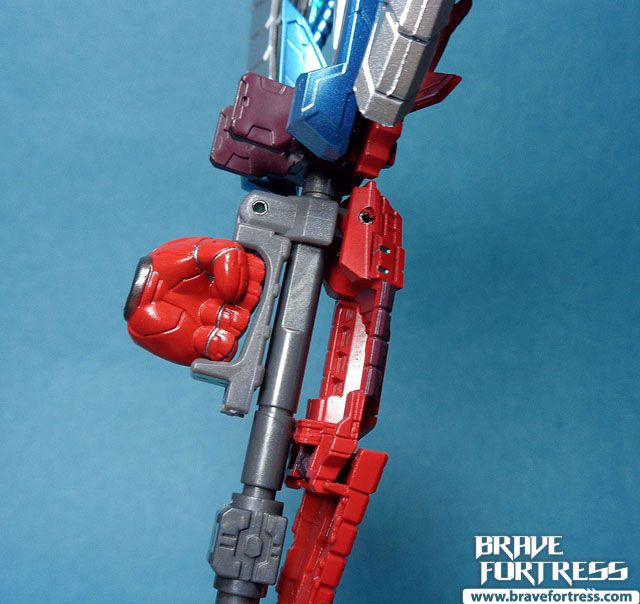 Now, there’s actually a third way for the Emperor to hold the Tomahawk, it involves disconnecting the handle first, then inserting the hand into the new handle port.

This makes a huge difference with how the Tomahawk looks now, it also adds some more dynamic poses too. Credits to Mecha Alliance on Facebook for showing us a better way. 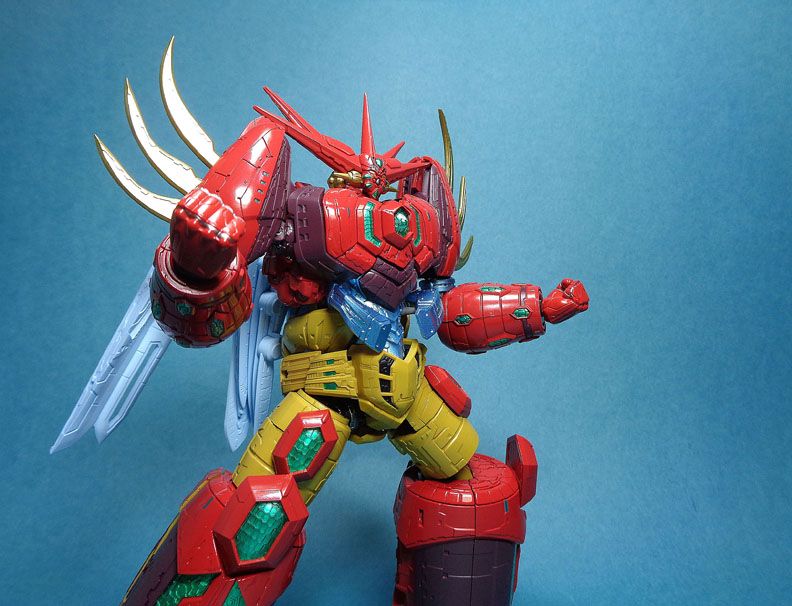 I really wish the set came with some sort of clear energy effects. It seems… lacking with regards to accessories really.

Unlike the more recent Dynamic Classics and Full Action SOCs, the base doesn’t have a bottom. This kind of took me by surprise.

Clear film cover still there on the name plate.

The display base has two modes, the first mode has more optional parts and attachments for displaying the Emperor in ships mode. 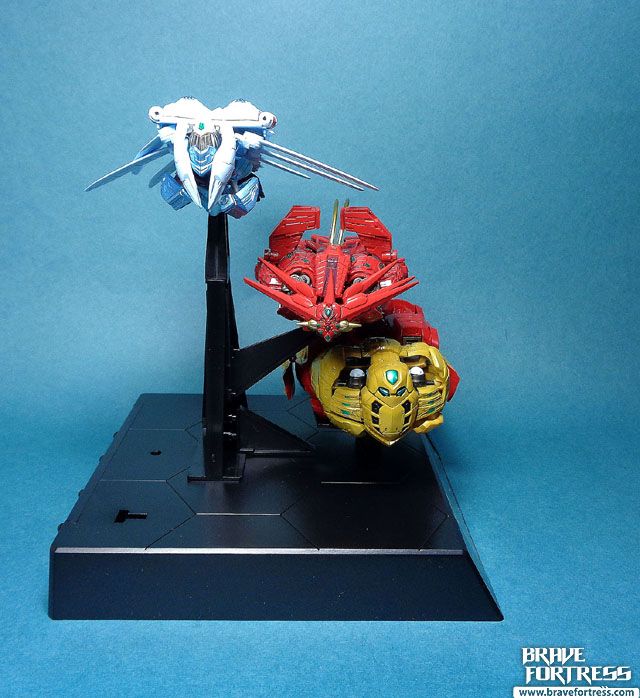 The second configuration is for displaying the Getter Emperor in robot mode.

The spare fists can be plugged into the back of the base. 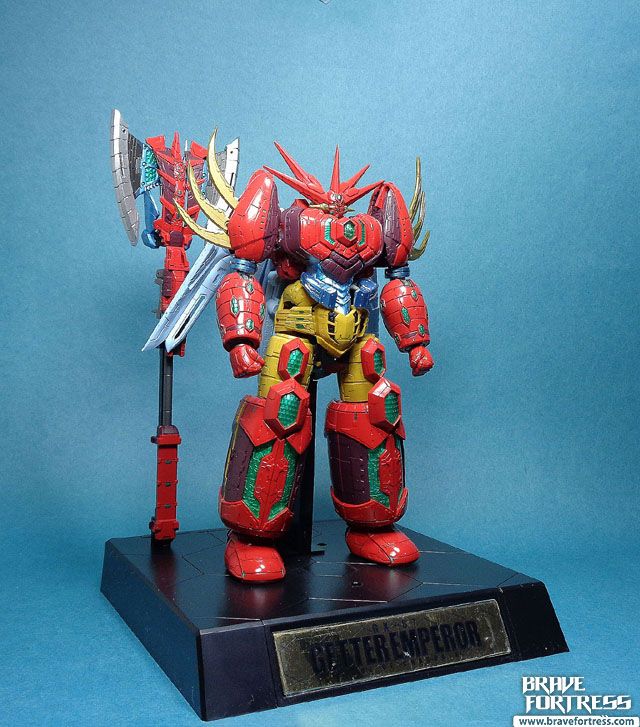 Make sure this clip on the Tomahawk handle is fastened on the Getter Eagle when you first take it out of the box to display in ship mode.

Likewise, this is the orientation and placement for the other half of the Tomahawk on the Getter Bear.

This is what the hip section should look like more or less when combining to robot mode.

The crotch plate is a bit tricky to lock down, but I guess you don’t really have to tab it all the way in for it to work. 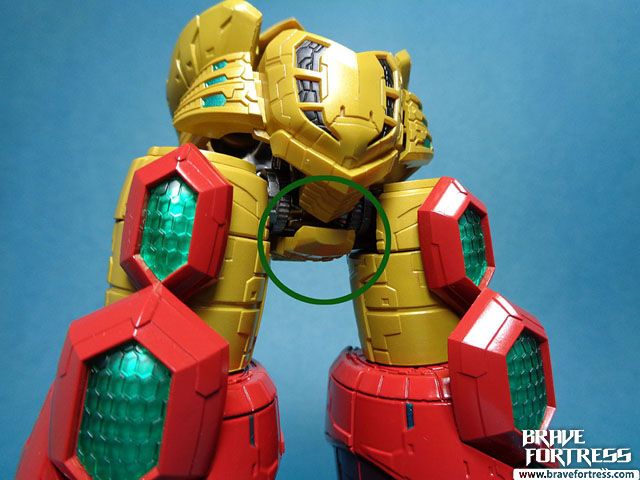 Make sure to tab in this section for the neck on the Eagle, otherwise it’s going to leave an unsightly gap. It’s a bit tricky to tab in the first time, but you’ll get the hang of it.

The sides of the feet are supposed to slide out, but they don’t seem to have a locking mechanism? They tend to slide back in too easily.

There doesn’t seem to be a way to lock the sides of his “belt” down. I think they are really designed to be moveable to allow for poseability?

The sides of the chest panels are a bit tough to tab in, but this is what they’re supposed to look like.

If you’re struggling with how to return the Getter Eagle to ship mode, this is what it’s supposed to look like.

Remember to return these pieces to the Emperor Jaguar when returning the toy to the box.

There’s a locking mechanism for connecting Emperor Jaguar to Bear, but it’s super tricky and I couldn’t get it to work. As is, mine’s just sitting on the secondary connection peg (the diecast connector peg on the Bear), it gets the job done but for added support, ideally, one should clip all connections in right. I’ll have to go back and retry it when I have the time . In the meantime, try to watch Wotafa’s Youtube review to see how the connection should work.

-Each Getter ship spans roughly 5 inches in length with the Bear being the longest (5.5 inches)

-Transformation is clean and while not exactly fun, it is not too difficult to put together.

-Gotta love all the details that went into the tooling and sculptwork on each of the Getter units, even on the Tomahawk.

-Hats off to the design team, they anticipated and placed metal joints where reinforcement was needed the most and put in plastic ball joints where it was necessary (the belt section) so that when force is applied, the joint pops free instead of breaking. Very clever.

The Bad
-New box material? It’s thicker now (similar to what Banpresto uses) but kinda lacks the charm of the usual SOC boxes.

-Big void in the accessory tray, was there supposed to be a bonus accessory but they cancelled it? Seems odd.

-Bottom of the display base is hollow.

-The sides of the feet are meant to slide out, but I don’t think there’s a lock to keep them in place? I usually end up accidentally pushing the sides back in when I pose the figure. A bit annoying IMHO, I wish they gave us spare, non-transforming feet, like with the Gunbuster.

-Not much in terms of accessories. They could’ve maybe added some effects parts or tiny Getter starships, like with the Yamato? Just to show the scale and size of the planet-sized Getter.

-Part of me wishes the “wings” on Getter Emperor were a wee bit longer, they seem kind of short from certain angles.

-Articulation is a bit limited with the legs, no “hyper extending joints” here to add range of motion sadly. Too bad.

-The connection for Emperor Jaguar to Bear seems a bit awkward. I couldn’t get mine to latch on right. I will have to go back and re-examine this again later on.

No real quality control problems on my end.

Overall, it’s pretty good. Beautiful sculpts, paint and engineering all around! The transformation is not too complex (I was worried we were looking at another Aquarion), it’s got good heft and bulk. Plus I am super happy that we are at least getting a fully “perfect” transforming Getter Robo in the Soul of Chogokin line, even if it’s just one mode. It always felt odd to me that we never got one of those in this line, considering a relatively smaller company like Studio Half-Eye was able to make their own “Perfect Change” Getter almost two decades ago. The only real downer here for me is I wish it was taller. It didn’t have to be ginormous, but it should’ve been at least in the upper range of the SOC combiners. Considering we’re getting the “Ultimate Evolved Getter Robo” here, I was expecting the combined form to be a whole lot taller. As is, it’s just around Voltes or Combattler in terms of height (roughly 9″). I was really hoping it to be at least in the same range as Godmars (11″), now that would’ve been super impressive. 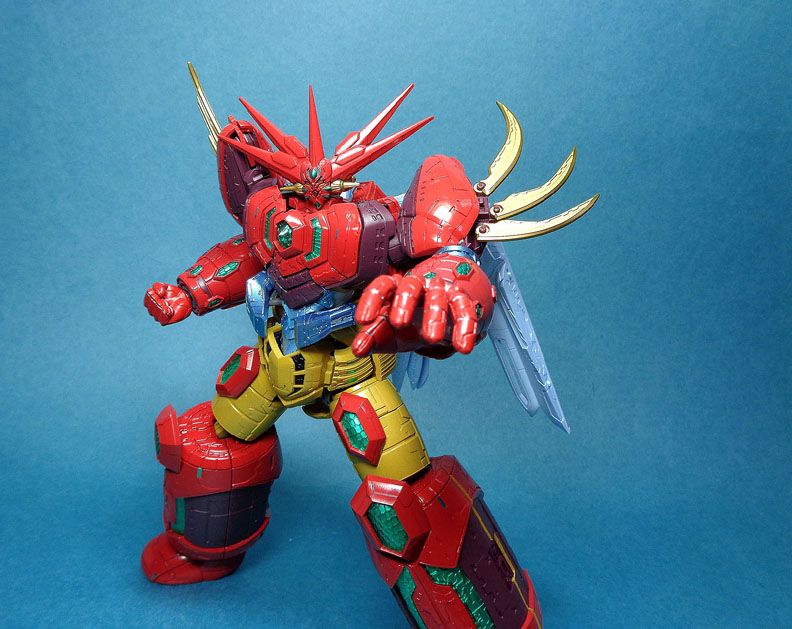 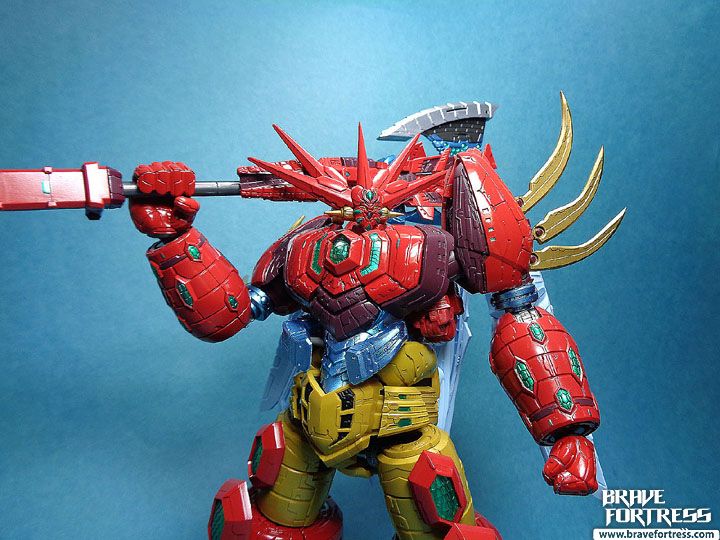