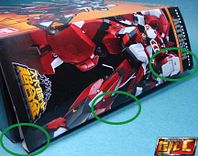 Diecast is mostly in the main torso of the toy, surprisingly, the chunky lower legs are diecast as well, giving Alt Eisen a feeling of heft and balance. Revolving Stake can be “reloaded”, sadly, it doesn’t come with a reloader or actual removable shells (unlike the Unifive figure).

Comparison with the Unifive Banpresto Alt Eisen
(SRC on the left, Unifive on the right)

However, the Super Robot Chogokin figure has one critical advantage over the Unifive and that’s awesome poseability and sturdier joints. The Unifive Banpresto figure had a lot of bad press about how weak the joints were and how its leg joints were prone to break from simple posing.

With that said, I have to say, at the end of it all, the extra gimmicks are nice but it’s how tough sturdy and resilient the joints are what really counts. If I had to choose one, given that both have decent amounts of diecast, I would most likely recommend the SRC figure.