Full-colored manual, it doesn’t come with a comic but instead it comes with a text-based introduction to “Simba”.

Notes when first removing from the box:
When you first open up the package, Simba is in his collapsed form. So you have to flip out his hands first.

Next, his lion legs are supposed to be oriented like so.

Then, you have to pull out his legs by pushing this release button on the sides of his legs.

Unfortunately, more often than not, the legs are ridiculously hard to shaft down, so you have to open up the legs by loosening these screws to allow the legs to move up or down.

Lastly, remember to pull out his heels to allow better stability.

Sigh… my unit came with a scratch on his chest. This really bugs me. Since KFC rarely does parts replacement (I think), I’m just going to have to bare with it forever.

Normally, I like to slap faction stickers on my Third Party Masterpieces, but in this case, the Autobot symbol is supposed to be located on his crotch, which has to split later on when he combines with Star Saber. After thinking it over, I just decided to leave it as is and not use the sticker anymore, since it doesn’t really stand out so much anyway thanks to the red colors on his crotch area.

After being defeated and rendered nearly useless by Deathsaurus’s Living-Metal Destroying Cannon, Ginrai offers himself to undergo an experimental procedure that will allow him to power up Star Saber, becoming the powerful Victory Leo.

The figure comes with multi-jointed fingers for his hands. 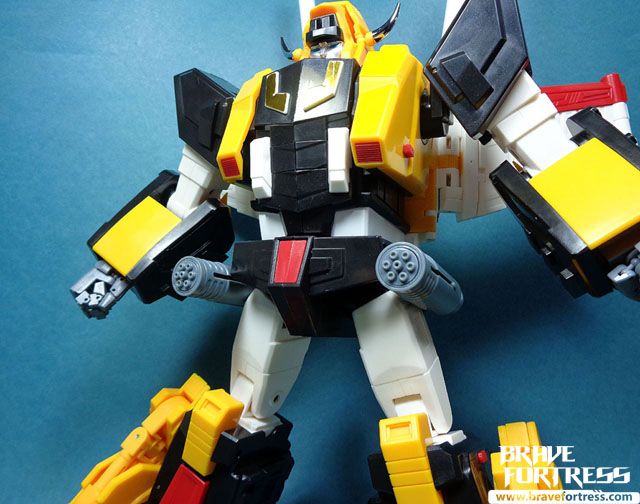 Simba’s tail can also be used as a whip weapon.

Though, because of the ball joints, it’s bit hard to prevent the weapon from going limp.

His V-Lock Cannon has a flip-out handle for different modes.

V-Lock Cannon plugs into his right side via this port.

Alternately, the V-Lock cannon can be handled by hand.

V-Lock Cannon can also be mounted on Simba’s back when not in use.

Too bad the limitations of the joints prevents the figure from holding the cannon with both arms, just like in the Anime.

Just like with the G1 toy, his V-Lock Rifles can be mounted on this forearms as well.

The front section of his ship mode can be opened up to form a shield.

The shield can also be mounted on this stand to form a physical barrier.

The base of the barrier can also be equipped on Saber, though it is a bit tricky as it requires plugging in both halves of the base into his hand at the same time. I won’t be doing it again after this.

You can also pose Saber holding the V-Lock Rifle, but it looks awkward.

His front paws can be opened up.

Equipping the tail is a bit tricky, but it involves locking his legs onto the tail handle. 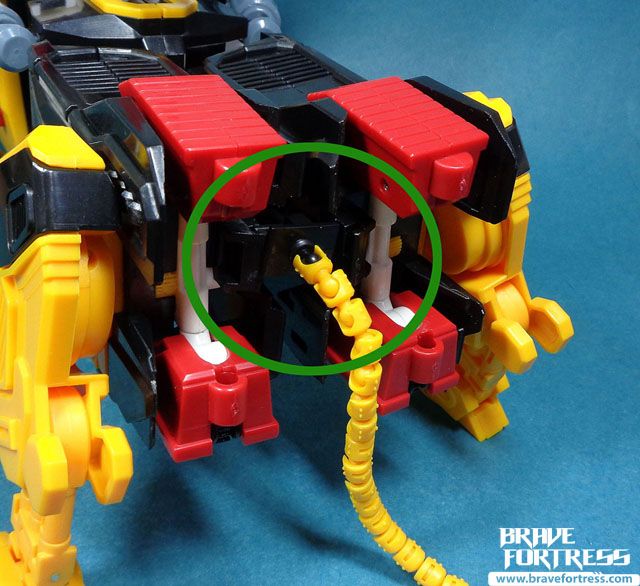 Alternately, you can lift the lion’s head a bit higher for better angles when you detach it from the body.

Support base for the Starship mode.

V-Lock Cannon can also be mounted on the Starship mode but it droops really bad.

Despite having no diecast parts (as far as I can tell), Simba is insanely heavy! Weighing over 1 kilo in weight.

The darker blue section is from Simba.

Simba clips onto Star Saber’s V-Star thanks to these spring-mounted clips on the side. They’re really sturdy.

Combining to form Victory Saber – Just like in the cartoons, Victory Leo splits apart and folds into itself to form platform boots for Star Saber.

Remember to unlock these clips so that Simba can flip open to his sides.

Compressed Simba (minus the wings).

Victory Saber’s feet should be folded down.

The base of the barrier splits up and forms covers for Star Saber’s feet, they’re very hard to slot into place but I find it works easier to position in the center pegs first and then push the outer hinge last.

Lastly, peg these posts into Star Saber’s screw holes to hold him in place.

For the wings backpack, these green sections are meant to clip onto Star Saber’s back. The red section does nothing (I think).

I personally didn’t like forcing this lock into place, so I just let it be, otherwise I was afraid I would ruin Star Saber if I forced the connection.

These side locks alone are sturdy enough to hold the backpack in place IMHO.

One of the Strongest Autobot Supreme Commanders, Victory Leo augments Star Saber’s strength and speed in this combined form. But unfortunately, as a side effect, sometimes Victory Leo’s more aggressive traits tend to affect the usually calm Star Saber and make the heroic Autobot more savage in battle.

Errr… folded up Simba looks too long from the sides though, oh well.

I really like the look of the combined form.

Fully Combined, Victory Saber weighs 1908 Grams and stands 15.5 inches tall (18 inches or more depending on how you pose the V-Lock Rifles).

To allow for some allowances when equipping the cannon, you can opt to leave the sliding mechanism out to give the gun handle some clearance.

Unfortunately, one major problem here is that Star Saber’s ratchets aren’t strong enough to hold the combined form standing in action poses for long. I really don’t recommend leaving him posed (unless in an “A” stance) without a support stand.

Overall, an impressive figure, I do wish it had some diecast though. The chances of Takara releasing an official Victory Leo right now are slim to none, especially since the official MP line hasn’t really been expanding their character rosters for a while (a new character just once a year??), which is sad.

The combined form looks good but you really have to be careful with how you pose him thanks to Star Saber’s ratchets not being able to do the job. I will most likely eventually display them individually to avoid any problems down the road.