Similar to his fellow Hot Rod Patrol members, Trip-Up is a regular delinquent trouble maker. His aggressive nature often leads to fights, even amongst his fellow Autobots. Sometimes mistaken for Decepticon punks due to their rowdy behavior, this Autobot Micromaster team actually comes through during emergencies, as their courage and tenacity can’t be matched.

Due to the design of the toy, there’s hardly any useful articulation with this guy.

The leader of the Hot Rod Patrol, Big Daddy rarely disciplines his team’s misbehaviors, preferring to let them do their own thing. Each member of the team has the ability to generate geometric shields, which can deflect Decepticon beams.

Similar to Trip-Up, there’s not much poseablity to this figure, either.

Bombshock leads his Military Patrol team while each member plots to be the new leader. Cold, merciless and ruthless and always itching for a fight, Bombshock welcomes any who challenges his leadership. 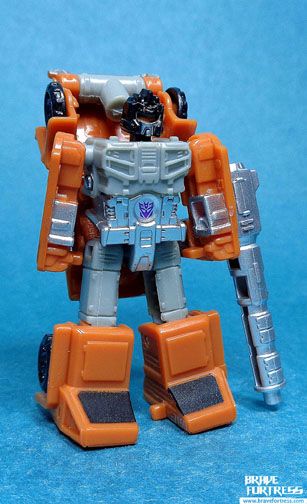 Sadistic and cruel, Growl is the same like his fellow Military Patrol members. The team members all prefer to bully their opponents in the battlefield, while constantly bickering and taking potshots at each other out of spite. Each member is convinced they should be the one to lead the team.