Of the entire team, Blast Off looks the least like his G1 namesake. 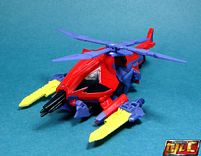 The blades on his left forearm are not removable.

Weapons can be held 2 ways. 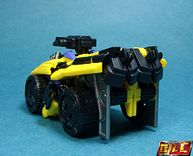 Brawl is the only Combaticon to appear in the first game, War for Cybertron.

I’m impressed at how tall this figure is, he’s about 11” tall when combined.

The Sonic Cannon weapon is a combination of all the Combaticon’s weapons. It looks weird though, reminds me of a walking cane, really.

Also, I can’t say I’m a fan of how the arms look so long, this was somewhat remedied from a Hong Kong toy forum where they modified Blast Off’s and Vortex’s transformation a bit to shorten the long arms.

I also reworked the Sonic Cannon so it looks better and can be held better by Bruticus. Overall, not bad given the thing is made up of 5 deluxe figures. The biggest issue I have with it is the way the locking joints for each Combaticon is done, it’s really hard to snap the figure into position, also for disconnecting the Combaticons. So best to be careful with that.