Filed under: TF Generation One - MP & Encore
Share This Page

Weapons can be attached to the spoiler in vehicle mode.

The front wheels can pivot left and right, same as with the previous versions.

Hologram driver is removable (still missing his legs, lol). The figure is the same as the PS-01A.

I’m really glad Mastermind Creations decided to reissue their MP Mirage/Sphinx in toon accurate colors. The original PS-01 is close to impossible to get and the PS-01A is closer to the G1 toy rather than the cartoon model. I really wish Fans Toys did this with their releases too (Fans Toys Perceptor, Reflector, Insecticons reissues please).

In the G1 mythos, Mirage came from a life of privilege prior to the war and would rather be lapping it up in luxury rather than fighting the good fight. His tech spec mentions he cannot be fully trusted due to his uncertainty in the Autobot cause. He is equipped with an Electrodisruptor that can visually camouflage his position and placement for a maximum of 6 minutes.

Thanks to the diecast and excellent joint design, this guy is a lot of fun to handle and pose. The weight that comes from the diecast gives it a good hefty feel when you handle him.

Heh, his thumb can even give a “thumbs up” pose.

Parachute – This accessory is exclusive to the original PS-01 and this version, PS-01C. It was never included in the PS-01A.

Thanks to the clever use of wires, as opposed to string, this makes the parachute look awesome without actually having to drop the figure to visually execute the chute.

Diecast parts include:
-main support struts inside the torso
-Heel and parts of the feet

Shoulder rocket is now painted silver, unfortunately, the rocket is no longer removable? I’m not sure if it’s because the paint was still wet when they plugged it in? The rocket can be removed by force but it really shouldn’t have to be, I didn’t encounter this issue with the PS-01A, removing the rocket there was easy as pie.

Alternate faceplates, smiling and a neutral one but with a different forehead crest (sharper diamond), I guess it’s more of an animation model thing. The PS-01A only came with a smiling face.

I really wish they just removed this tab in the center of the chest (it’s for holding up the front of the vehicle mode). It used to be blue on the PS-01A, now that it’s white, it’s even more unsightly in robot mode.

Tires are still rubber. That said, I really hope these don’t melt over time, that would leave an unsightly smear on the display case surface.

Sigh, mine came with a small scratch on the spoiler right out of the box. That’s a bit annoying.

The box of the PS-01C is much, much smaller by comparison.

PS-01A did not come with a parachute.

Seeing as how now I have two of this guy, I guess I’ll use the PS-01A as the vehicle mode display, since at this rate, I think I’ve practically double dipped in a handful of my MP Autobot Cars thanks to Takara Tomy releasing toon accurate versions in their line too. 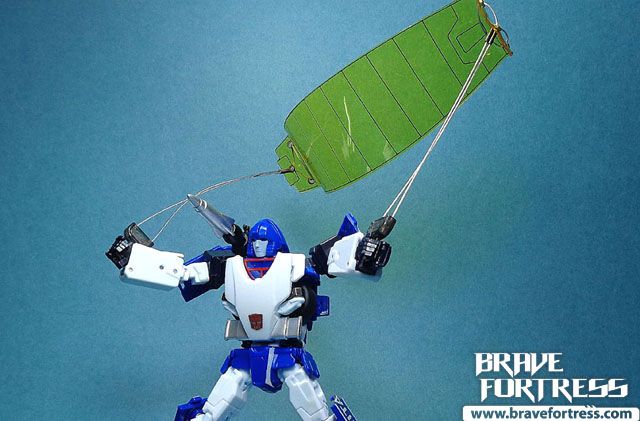