Right out of the box, you need to first attach his wings, this can be done by sliding the connectors into these slots in his back.

Originally one of the Guardians of Cybertron, Omega Supreme was the only Guardian to survive the centuries of War on the planet, with the others of his kind falling to the Decepticons. One of the biggest and most powerful of the Autobots, Omega also serves as a transport unit for the team when they need to travel to Cybertron. While capable of full dialogue, he intentionally limits his speech patterns to simple phrases.

Omega has real shelf presence. Plus thanks to the hidden ankle joints, he can pull of better balanced poses than Metroplex or Fortress Maximus.

The big blast effect can be disassembled into smaller components.

The smaller components can be attached to various hard points on Omega to simulate impact damage effects and explosions.

The fully combined effect part can be plugged into his cannons to simulate cannon fire.

Unfortunately, due to the soft plastic used, the effect tends to droop and kind of ruins the shot.

The effect parts can shortened to minimize the drooping but it still tends to be unimpressive. 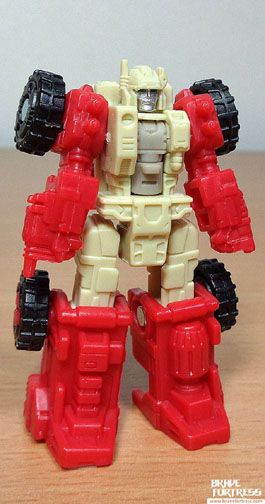 Countdown originally came with the Micromaster Rocket Base in the G1 toyline, which was very prominently featured in Transformers Victory Anime series. Countdown is said to be the first Autobot to explore outer space, having countless adventures, defeating monsters and overthrowing tyrants, becoming something of a legend.

Countdown has a fold out chest peg that can plug into Omega Supreme’s various points. 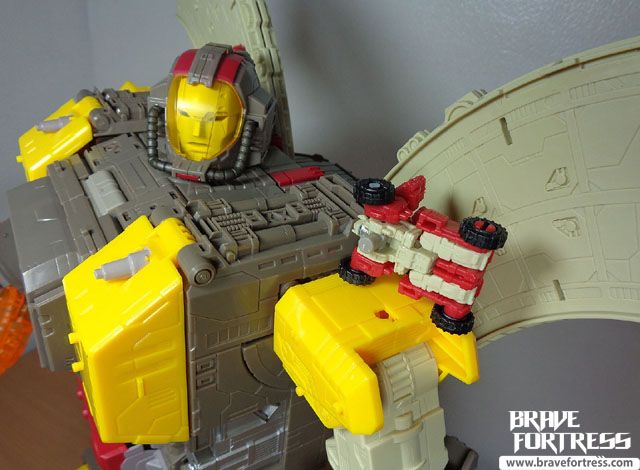 Standing at close to 20 inches (21.5 counting the highest point of his wings), Omega is taller than most Transformer figures, but not as tall as Metroplex and Fortress Maximus.

Omega features a hidden neck joint, so you can make him look up or down.

The back part of Omega’s head has a small cannon that can be flipped up to make him more show accurate, the bad news is that the cannon is a bit loose and won’t really lock in place to the proper angle.

I can’t say I’m impressed with this section, the flap tends to fall out easily, plus it’s untidy to look at even in base mode. I wish they had a better solution for this.

Just like in the cartoons and the old G1 toy, transforming him still requires taking him apart. 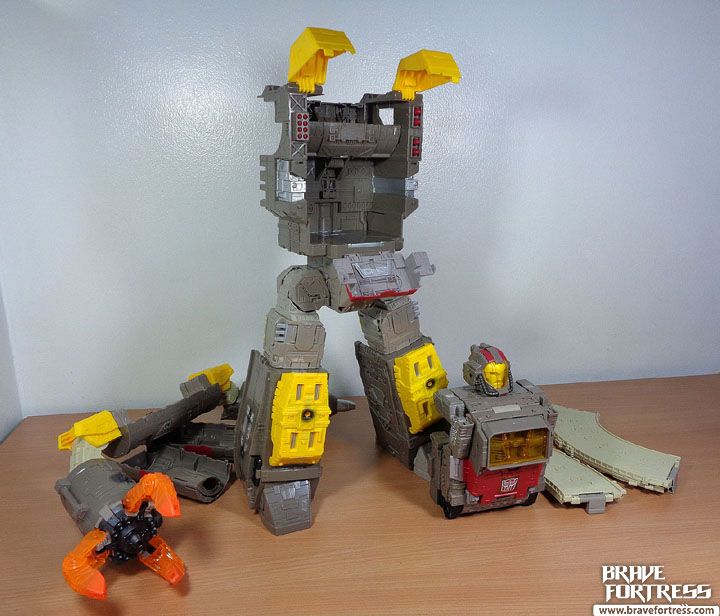 Main torso has a huge cavity with the tank section removed.

Rarely seen operating outside of the base’s tracks, the tank is mostly used for defense of the base mode.

Effects parts can be attached to his cannons.

Likewise, they can be attached to various points of the tank to simulate enemy fire.

One downside to the tank mode is that the turret has very, very limited range of movement, mainly due to Omega’s head being connected to it.

The tank’s main section can be opened up to load Micromasters!

You can securely fit Countdown in place without him rattling all over thanks to these locks.

The tank rolls on wheels on its underside, the treads do not roll.

I really love the base mode for Omega, it reminds me of its G1 counterpart more than how the updated Metroplex and Fortress Maximus figures were done (particularly Fort Max). I find it funny how in the show, the whole base “magically” appears wherever the rocket lands. Warp capabilities?

The base mode’s track is a perfect hangout for Micromasters. Nice touch including Countdown with this set Hasbro! I didn’t have time to pull out all the Micromasters but it would sure look great if they were all in there.

Ramps can be deployed from Omega’s thighs. Very cool!

The base mode features ports using Hasbro’s Adaptable Interconnection Retrofitter (A.I.R.) Lock System, which can interlock with other bases and components.

I do find connecting the wings to the ports a bit difficult, as the nubs are a bit too big for the slots. Difficult but not impossible.

I really wish they had some sort of flip out panels or console systems in the cavity of the body for Micromasters. As is, it seems kinda empty in there.

Omega’s shin guards can be flipped open to reveal more pockets for Micromasters to hang out.

Impressively, unlike the old G1 toy, the rocket is made up of Omega’s entire arm system as a single piece, without having to disconnect/ reconnect anything. Clever.

The end of the rocket has a compartment for Micromasters to fit in.

Sadly, no ratchets for the second joint of the “legs” of the rockets, so be careful with how you position the legs, as a wrong step will cause the rocket to tip over.

The fire blast effects can also be used on the base mode components to simulate enemy fire.

Heh, I stepped out for a moment, when I came back, my son had already started putting some Autobots down before I did.

With some of the Siege Autobots.

I should really do a proper group shot of the various Transformer lines from the last five years or so. So much cool stuff has come out and they deserve a proper team shot.

With Combiner Wars Devastator. I’m not sure if the scale is proper but I guess it’s better than expected?

If you’ve watched the episode “The Secret of Omega Supreme”, you’ll know he has some history with the Constructicons and how they were his friends back on Cybertron before becoming reprogrammed into Decepticons. 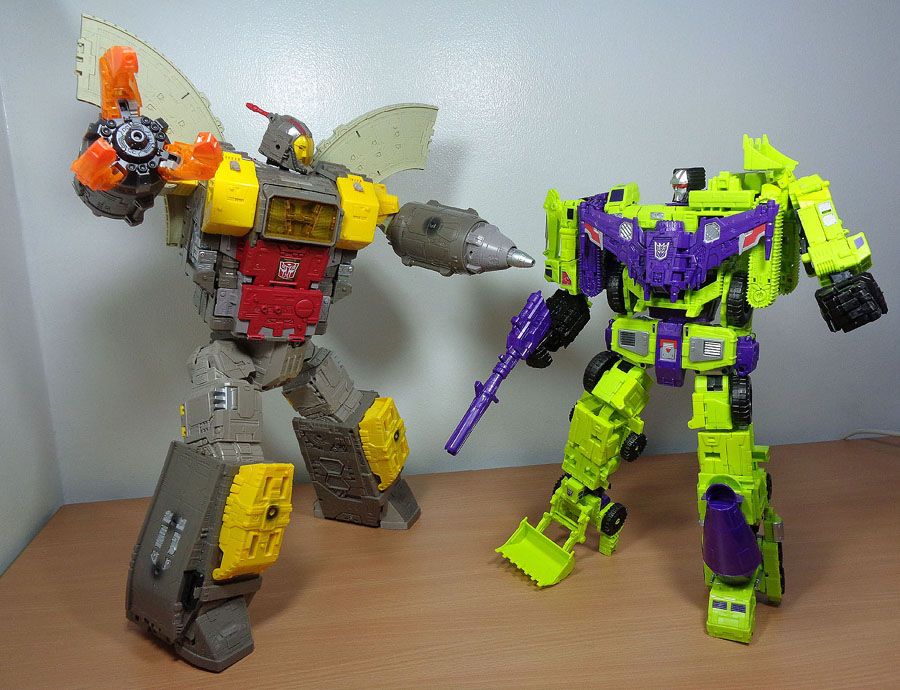 Overall, a very, very satisfying piece. I really enjoyed this set more than the other city bots. Lots of play value and the transformation is very, very enjoyable. I do wish it came with some electronics or light piping for his eyes to glow, they seem kind of dull as is, but that’s just nitpicking. Very nicely done, Hasbro/Takara Tomy.

Funfact Despite not appearing the 1986 animated movie (some presumed he was killed off-screen) , Omega Supreme was still around after the coming of Unicron, but he only had a few scenes in Season 3, since by then, Skylynx was often used as the Autobot’s main mode of transport.