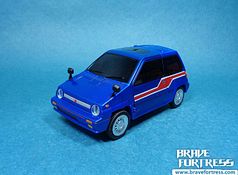 Savant’s vehicle mode is based off the original G1 Skid’s, which is a Honda City Turbo.

The interior even has seats, a steering wheel and a dashboard. Things the official Masterpieces don’t have.

The vehicle mode also comes with the Honda Motocompo, which was a “trunk bike” meant to fit inside the real Honda City. This little bike was actually also included in the original vintage Diaclone Honda City Turbo (Skids) toy, but was removed in the Transformers version due to cost cutting reasons I guess.

The Honda Motocompo is probably best known as the bike used by Kosuke Fujishima’s “You’re Under Arrest” Manga and Anime character, Natsumi Tsujimoto. The bike even compacts just like the real bike!

Lastly, the Twin Electron Blaster can be equipped in vehicle mode.

Since this is a Third Party, non-official item, it’s best to get some stickers from Reprolabels/Toyhax.com to make this guy more “toon-accurate”.

To apply, I find the best way to stick the stickers on is to use the tip of a blade, this way you have more control over the application, as compared to using just your fingers. You can also use the blade to help gently peel off a corner of the sticker in case you didn’t center it right and need to re-apply.

Skids is the Autobot team’s Theoretician, someone who poses theoretical solutions to problems rather than practical ones (basically, one who thinks outside the box). In the G1 cartoons he appeared in only two episodes. He had bigger presence in the Marvel Comics runs which had several stories and pages focused solely on him.

In the G1 cartoons, it was never shown how the new Autobots were suddenly on Earth. It was in the Marvel Comics run that it was explained how Skids appeared later than the original Ark’s crew.

Skids, along with Tracks, Grapple, Hoist and Smokescreen, were members of the Autobot team who volunteered to have their memory engrams transferred to “Crystalline Containment Vessels” aboard the Ark before the Autobots left Cybertron. When most of the Autobots were badly injured in a battle on Earth, Prime had Wheeljack create new bodies for the five Autobots and transfer their consciousness from the Ark’s Mind Bank. Creating fresh troops to bolster the Earth-based Autobot’s ranks.

The side-view mirrors are made from a soft, rubbery material. I hope this doesn’t turn sticky over time. I think it’s a good move by X-Transbots, otherwise, there’s a good chance these will break during transformation if they were made from hard plastic.

During transformation, this part of the dashboard always fell out on mine, but this is how it’s supposed to look when you put it back. I’m not sure if I can glue it down, as I’m worried it might affect the transformation?

When transforming Savant back into vehicle mode, make sure you these posts for the arms are collapsed, otherwise, you won’t be able to fit the arms back under the hood. It’s a bit hard to do as it does require a bit of force to collapse them back in.

While it’s cool that the toy comes with the Motocompo bike, there’s nothing left to do with it once Savant is in robot mode. Still, the bike itself is really cool!

Savant comes with the two guns, but sadly, he is lacking his G1 toy’s “Rocket Pod Launcher” and rockets.

Liquid Nitrogen Rifle can shoot up to 600 feet away.

I really love the poseablity of this figure (well, except maybe the shoulder design). But the ab crunch joint makes it really fun to pose.

Overall, I enjoyed this figure a lot. The figure has decent amounts of diecast, is fun to pose and looks really good. There’re even some ratchet joints in the legs.

What I didn’t like about this figure is how hard it was to unlock the windshield from the hood. It was very hard to disconnect and I was really worried I would crack the clear plastic windshield. Transforming the legs was fun and intuitive, unfortunately, transforming the arms felt like it was unnecessarily overly-complicated.

At this point in time, only X-Transbots has made a Masterpiece Skids. Given how little he appeared in the G1 cartoons, it is very highly unlikely Takara will be making an official release version anytime in the foreseeable future.

As for the repaints of this mold from X-Transbots, I’m on the fence for the X-Transbots Taiho and Herald, though I’m more inclined to get the Taiho over the Herald, mainly due to the “You’re Under Arrest” homage. The downside to getting Taiho is that the car is the wrong model, as it should be the Honda Today base model to accurately recreate the one Miyuki Kobayakawa drove in the Manga and Anime.