The text translates into ” This, you b@stards, is that which you most fear, the Getter Energy Tank!”.

The box is bigger than the standard sized Getter One boxes, due to the addition of the box which contains the Getter Energy Tank with its cables.

The contents of the box aren’t that big, so it really seems wasteful for it to eat up so much space.

Contents (be careful not to loose the puny cable. it plugs into Getter’s abdomen)

Damaged Getter 1 comes with the following: 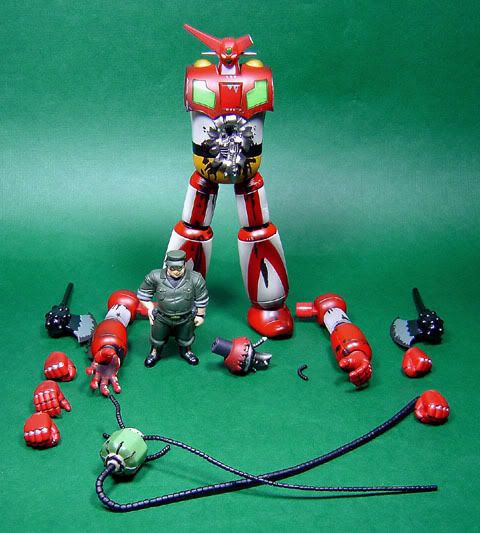 Damaged and “Normal” Getter One

I don’t know if this was intentional but the red part on Getter’s back isn’t painted. 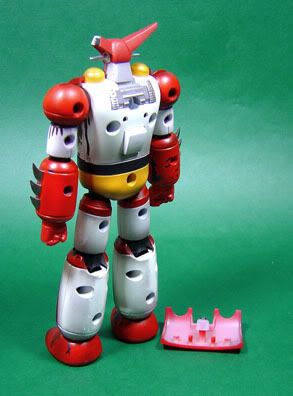 For some weird reason, pushing the “Getter Beam” switch on the back will make the damage part poke out.

Both arms can be removed.

” This, you b@stards, is that which you most fear, the Getter Energy Tank!”[/b]

Thoughts on Damaged Getter One
-No ratchet joints on the shoulders.

-The joints for rotating the forearms are tight as heck! Be careful not to break them when trying to pose the Getter. I didn’t encounter this problem with the Normal and Black Getter.

-The extra fists are also somewhat tight to plug into the peg.

-Don’t bother opening the underside of the styrofoam tray. There’s nothing there.

-I’m not sure how good the quality of the paint is, there are a lot rubbed off paint marks on the paper wedged between the Getter and the styrofoam tray.

-The styrofoam seems different. I think they used smaller pellets this time, it seems to crumble easily (I found a lot of bits and pieces all over the Getter when I first opened it, a lot! Nothing permanently adhering to the Getter’s surface but still, not cool)

-Take note of the “bars” holding down the Getter to the styrofoam tray. One side of each “bar” is covered in tape, this is to prevent contact between the styrofoam and the Getter. This is important when returning the toy to the box.