Designed by the famous Shoji Kawamori (the same fellow who redesigned the Starcream and Skywarp for the Masterpiece series, THS-02 Optimus Prime and the person who did the design work for the Yamato Macross Valkyries).

This was supposed to be Kawamori-san’s entry into the “perfect changer Super Robot” category, taking a page out of Go Nagai’s Getter Robo concept, where three ships merge into 3 various forms of mecha based on the lead ship of the formation.

Another interesting concept for the show is that there are 9 Pilots, three inside the Vectors while the other six are on standby at the base, ready to teleport-swap with any of the other pilots should they be injured in battle.

While it can be observed that the engineering design for the toy is top notch, the execution is a bit lacking. Case in point, the connection joint here is in the head of one of the ships. Worse, to detach the connection one has to use force(no release trigger) so I wouldn’t recommend multiple transformations, otherwise there may later be signs of stress marks on the plastic.

Anothering annoying thing about the toy is the fact that it can’t stand!!! There are ratchet joints but they can’t hold up the figure well enough. Luckily there is the prop stand, but still, it’s ridiculous to release a toy that can’t stand without the prop.

The prop connects to this part of Aquarion

Once attached the gold plates have to be removed if you want to close the wings together again.

-“Hissatsu-Getsumen punch” (Sure kill Moon surface punch – ever see a punch that reaches the moon? Only in Anime kiddies 😉 )

-“Mugen Ginta” (Infinite Scolding slap – a variation of the Mugen punch, only he used this on an enemy mech piloted by a kid)

-“Infinite Cross” (another variation on the Mugen Punch, but this time both arms in opposite direction)

Aquarion Mars usually weilds a saber whenever Sirius is the pilot

Aquarion Mars’ finishers are:
-“Red Heat Fire Goal” (one of the pilots is a Soccer player, he basically kicks a ball of energy at the enemy) 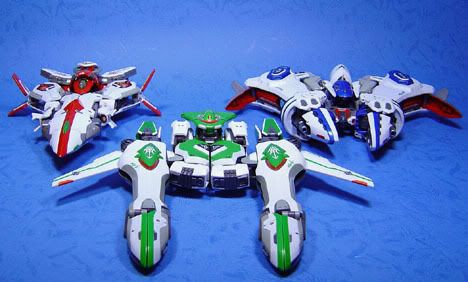 -“Reverse Psychography Blast” (combined attack by two of the pilots who have ESP, causing an explosion on the core of the enemy through telekenisis)

-A lot of articulation.

-Not much in terms of accessories (3 arrows, 3 swords and an extra pair of fists per mode plus the prop stand).

-Oh, did I mention? The Robot can’t stand~! Hehe, seriously though, the design is really good (I had a lot of fun transforming it actually) but the lack of solid ratchet joints for support just totally makes this one take a dive (in every sense of the word).

The Ugly
Well… given that I’ve already stated the most obvious fault of this “masterpiece”, the final nail in the coffin for me was the fact that everthing is locked together by “arrowhead” peg and holes kind of connection.

Generally the connection is very solid and I don’t expect the toy to disconnect at any time, but the effort it takes to disconnect certain ships (Sol from Mars) is a big problem at times.

Overall, given the glaring problems of the toy, high price tag and really lackluster Anime series behind it (I didn’t like it except for maybe a few of the songs) I wouldn’t recommend this toy (unless you’re a diehard fan of the series). I think this is one of the few things I’ve ever regretted buying. Oh well….