This is the “Toyshunter.It” Italian Exclusive version and contains a total of 3 bodies instead of just 1, so that each Option Part can be displayed all at once. This version was shipped out a month later than the standard release. 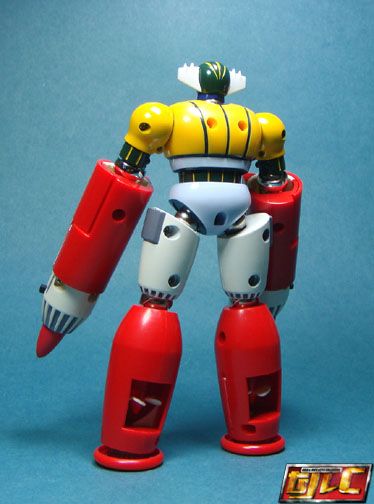 There’s a ball joint it the ankles.

The propellers can move. Nice detail here. No spring action gimmick though.

Thanks to the extra bodies, you can display all 3 alternate modes at once. I do sort of wish the bodies came with the standard set too.

The Good
-Plenty of diecast parts, generally the shoulders, thighs and feet (except for the Marine parts, plastic feet), and Sky Parts (diecast lower legs too). The Brave 35 Jeeg had plastic shoulders

-Metal also present in this part of the Sky Parts “backpack”.

-Rubber soles for the feet. Good call by CM’s, This really helps stabilize the figure.

-Rubber treads for the Earth Parts.

-Impressive design work for the “backpack” on the Sky Parts. In the Anime, the legs just “morphs” into jet mode. The backpack doesn’t make the toy off-balanced either.

The Bad
-No markings for the Italian “3 bodies” version on the box. If you plan to purchase the 3 bodies set, better make sure the seller is highly reliable.

-Plastic torso. In the Brave 35, the Jeeg had diecast upper torso. Cost cutting measure here, I guess. The difference in weight is about 50 Grams (100 Gram for the diecast torso, 50 Grams for the plastic torso).

The Ugly
No really ugly problems with this set, but there is one small hiccup that somewhat annoys me, the shoulder spikes for the Earth Parts.

In the Anime, the blades for both sides are pointing backwards, but in the toy, they’re facing in opposite directions. More cost cutting? I don’t know, it does seem that it should have been an easy fix.

Overall, I like it, the set won’t disappoint fans of the series and it is a great add-on to the Brave 35 Jeeg. or even as a stand alone set. I recommend getting the extra bodies version if you can find it. It’s a bit annoying that there is no way to tell which version has the extra bodies as the box has no markings indicating it. So one will have to buy only from a trusted seller.

I have no idea how limited the extra bodies version is, but the black Jeeg Option Parts set is limited to 150 Units. If anyone has any additional info on this please feel free to add. 🙂

One last thing, the extra bodies are just in a baggie and precariously taped to the bottom of the box. I don’t think this is safe as over time you might forget they’re there and they might fall out of the box when you pull out the styro tray next time. I recommend placing the extra bodies somewhere else (close to the toy, of course) if you plan to store the toy after you open it.

Mine, I just put the bodies back in their original baggies and put them in a ziploc bag. But that’s just me.