Story:
After losing the Lion “Galeon” at the end of the Gaogaigar TV series, the 3G foundation(Gutsy Galaxy Guard) makes a new machine to fight a new terrorist organization called Bio-net.

The machine is called the Phantom Gao, which transforms into the Gaofar, which then merges with other “auto-piloted” vehicles called “Gao Machines” to form the new King of Braves, the Gaofighgar.

However, halfway through the GGG Final OAV, the Gaofighgar gets obliterated(it’s really cool!) by a new alien threat called the “11 Masters of Sol” (see the last viewable video in this post) who use a reverse version of the G-Stone(the Gaofighgar’s core energy source, which is fueled by courage and willpower).

To combat this new threat, the heroes manage to awaken the final form of the King of Braves, the Genesic Gaogaigar.

With the release of the CMs Gaofighgar we finally now have a complete in-scale “trinity” of the three King of Braves, complete with diecast parts and transforming gimmicks. Thanks CMs Corp!

DIMENSION PLIERS
-I prefer to leave the forearms pushed inwards a bit, this helps keep the Pliers stay connected. But it’s still very unstable to display it this way. I wish CMs made a better stand for this accessory.

With the other Brave Gokins

-With God RaijinOh.
-God RaijinOh is definitely the tallest among all the Brave Gokins released so far.

-Different “Drivers”. The first two are from the Star GGG set and the third is the one for Gaofighgar. 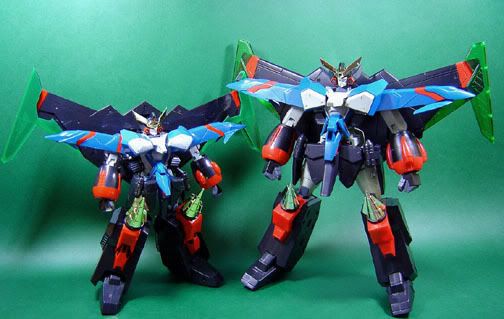 “Victory goes to the Brave!!!”

The Good:
-Diecast only on the Gaofar (not that plenty though, Ken-oh feels heavier).

-Diecast parts on Gaofar include:
*the rods (see “Miscellaneous photos 3 “).
*Torso and thighs (except the protruding/pointy parts, those are all plastic).
*lower legs (only the blue parts, the white parts are plastic).

-Can attach the pliers and hammer.

-Very nice engineering on the Gaofar (the opening hatch for the Linear Gao II opens simultaneously thanks to a new internal gear mechanism).

-Linear Gao II has a spring eject gimmick for “jettisoning” those rockets on it’s side, just like in the anime.

-“Anime accurate” Gattai. The Linear Gao II passes through the Gaofar!!! (I half expected a Yujin DX design, via plug-ins, glad I was wrong).

-Extra TV GGG head(for Gaofar) to use when creating a “Frankenstein GGG” with a Gaofar core.

-alternate exhaust plates for the Stealth Gao III wings(simulate “open or close” vents, have to swap though)

-Torso has that “shining ,opening belly hatch” gimmick from the anime that opens whenever GFG is doing its “special moves”(“Ul-Tech Engine Full Drive mode”). While not anime accurate(rotates to mirror face instead of vertically opening and closing) at least it’s better than not having that gimmick there at all(it’s the first GFG toy to have a gimmick like that ).

-The GFG is very stable, the wings aren’t that big a problem, it’s got better balancing than the Star GGG.

The Bad:
-Gaofar’s head is really, really, REALLY tight on mine, I didn’t dare rotate it for fear of breaking the joint. If it weren’t for online pics I didn’t know it could move at all.

-The Gaofighgar head still doesn’t lock in at all, just like the 01 GGG. It comes off when you tilt the toy.

-It doesn’t have diecast in the shoulders, or Drill Gaos(same as TV GGG/Brave Gokin 01/02).

-Hell and Heaven isn’t quite anime accurate, you have to push the chest plates back to get the hands together. It would’ve been better if they added an extra swappable smaller chest plate.

-Kind of hard to insert the exhaust ports on GFG’s side since they’re really small(see “Miscellaneous Photos 2”). It would’ve been nicer if they made the connections bigger.

-Insanely tight joints in the inner shoulder and be ready to struggle with inserting the forearms!! Gaahh! It’s ridiculously tight to insert and remove. I don’t know if this is just localized to my unit only. Be careful! When removing the forearms, try to push the wrist instead of pull on the arms to prevent breakage.

– The worst news is that the Linear Gao II is very, very prone to heavy scrapes when passing through the Gaofar. Fortunately it’s contact is on the plastic parts so it’s not that obvious(as compared to say, painted parts), but still, it’s very painful to watch it end up that way.

Overall, even with all the problems I still like this toy, it’s got a certain “solid” feel about it, I prefer it over the GGG and Star GGG(maybe generally because I never really liked the GGG design with a lion and a bullet train smooshed together).

I liked all the changes with the internal design on the Gaofar, it seems CMs is still not quite there yet in terms of “flawless design” but at least they’re trying.