Box:
Generally it’s pretty small compared to the other CM’s Corp. releases. But it’s pretty heavy thanks to the heavy Gaigo toy inside. 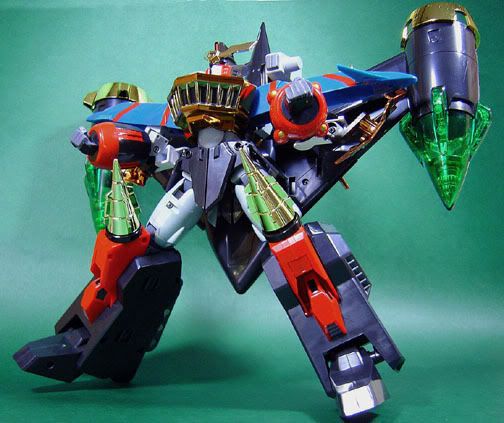 Comparisons with the other GGG mechs
With the Gaogaigar

With the Star Gaogaigar 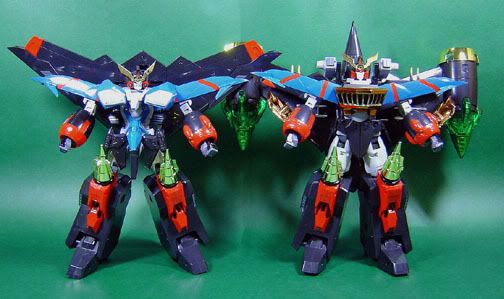 With the Genesic Gaogaigar 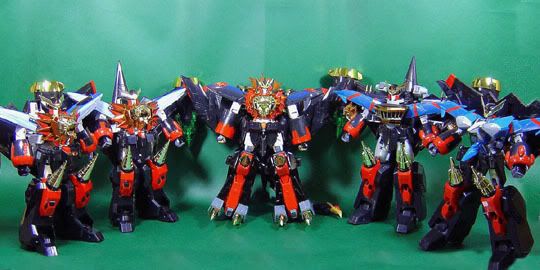 The Good
-The Gaigo has plenty of diecast content, practically 80% of the toy is diecast.
-Weighs in at 500 grams as Gaigo (The CM’s GGG and GFG weigh 680 Grams) and more or less 800-900 grams as Gaogaigo.
-Plenty of ratchet joints all over.
-The “grill” chest plate doesn’t really look all that bad, it kinda grows on you after a while. I guess the proportions were too exaggerated on the “Mecha Action Series” figure, good thing it’s not as bad here.
-It looks pretty cool next his GGG “brethren”.

The Bad
Sigh… where do I start? Sadly this is one toy whose negative aspects heavily outweigh the positives.

-The price .. Sadly, I don’t see anything justifying the $110+ price tag, apart from the hefty amount of diecast, the only accessories are the wings, the screw hole plugs and the parts for converting it to “Genesic” mode.

-“Active mode” Gaigo’s legs can’t lock. I’m not sure if this is just on my unit but pretty much the shafting legs collapse at will, the locks in the knee area don’t seem to work

-The ratchet joints, while plenty, are pretty weak in the crotch/thigh area, the darn thing kept doing wide splits whenever the legs are spread just a bit apart(like in the “Gaogaigo!!!” photo, that was a tricky one to do). There’s no problem when you stand the legs upright though.
I was going to try to do a “Genesic Gaogaigo” but I really doubt it can handle the top heavy Genesic parts due to the splitting legs so I passed on the idea.

-The “Gaigo hands” that can be seen on the back of the Gaogaigo’s wings. I’m not sure if this is intentional (for cartoon accuracy) since I have yet to see a cartoon sketch of the back of Gaogaigo, but it sure looks silly.

-Gaogaigo doesn’t have knees. After transforming the toy, the knee joints become practically useless since the shape of the Drill Gao 2’s edges conflict with the Gaigo’s thigh design. There’s no way you can move the knee joint.

-Gaogaigo can do the “Hell and Heaven” pose but it takes some “cheating”. You have to attach the forearms only by the edges (not lock them all the way in), otherwise the hands won’t meet at the middle due to the “grill” chest plate.

The good news is the toy looks better than the Gaofighgar does when in the “Hell and Heaven” pose.

-Connecting the Linear Gao 2 into the Gaigo is still a bit too tight. Not as bad as the GFG, but still would’ve been better if it were like the CM’s GGG.

-also a big negative is this: 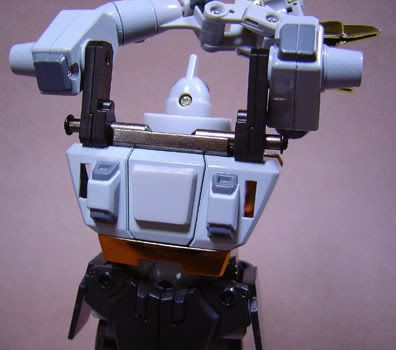 … to transform Gaigo between both Active and Accept modes, you have to slide the black PLASTIC pieces along the metal bar for the legs/arms to move in and out.

The Ugly
-What else? Buying extra GGG, GFG, Power up parts, to combine with the Gaigo.. Sigh..

Also, transforming this toy is definitely the hardest part. I don’t think I’ve ever broken this much sweat trying to merge the parts to form the Gaogaigo(maybe it’s because of the incident with the GGG knee from a while back that I’m overly cautious about transforming GGG toys now).

The Drill Gao 2 is the hardest to combine, for whatever reason, the Gaigo’s connection doesn’t go in easily. It takes A LOT of maneuvering to plug the connection into the Drill Gao 2.

Also, I just realized that NOT all GGG and GFG parts mix and match. GGG’s fist can’t fit into GFG’s forearms.

The clamps for attaching the forearms to the Phantom Gaos aren’t the same (bigger pegs on the GGG wing clamps) either, so better note whose parts belong to whom.

In conclusion, although the toy looks good next to the other GGG bots, folks who have been disappointed with CM’s past releases might want to skip this one. I can only think of this toy as something for the GGG diehard fan.

I’m actually glad they delayed the Great Baan Gaan now, if the company needs more time to “tweak” the designs of their transforming toys I’m all for it. I need a break from transforming/combining toys. The Goshogun and Patlabor are a welcome change of pace.