Sengoku Majin Goshogun(translates into “Warring Demon God Goshogun”), also known as Macron-1 in the US.

Box: It’s really small. I was surprised how compact the package was.

Goshogun is packed into the box sideways with the accessory tray stacked underneath the styro tray. 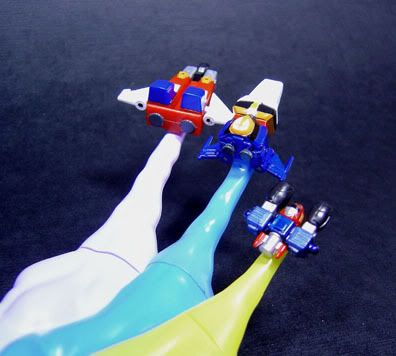 The Ships are actually quite small, made of plastic and the paint detail on them is very good.

Combining all three ships(requires removing some parts and adding fists) forms the TriThree robot. The TriThree is piloted by Remy(the female pilot of the team). 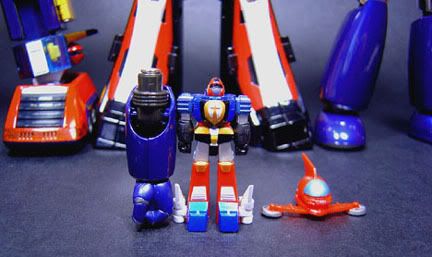 The TriThree sports some articulation at the head, shoulders, knees and fists. Pretty neat. 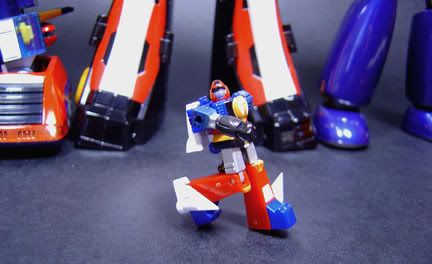 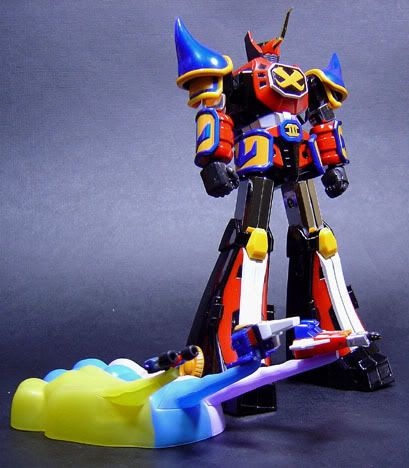 There’s also really excellent detailing in the “compartments” for each of the TriThree jets.

The main pilot for Goshogun is Shingo Hojo.

Goshogun’s weapons include:
-Cosmo Beam- blue beams shoot out of his eyes
-Bolster Beam-bullets shoot out of the black circles below his belt
-Light Impulse-the big “X” on his chest fires beams a la Mazinger Z’s Breast Fire.

His other weapons teleport into his hands. These include:

Here’s a look from the right side

I’m not exactly sure if the handles have a break somewhere for you to insert the fists into, since the manual didn’t say anything. So I just simply jammed the handles into the fist.

A warning about the Go Flasher, while it is cool that you can actually fire it(it plugs into spring loaded sockets in Goshogun’s backpack), it’s got a hair-trigger release. Even the slightest tap will send the flasher accessory flying into someone’s eye. I don’t recommend leaving it plugged in when going into your display shelf.

Comparison with Gx31 Voltes and the Gx01R Mazinger Z 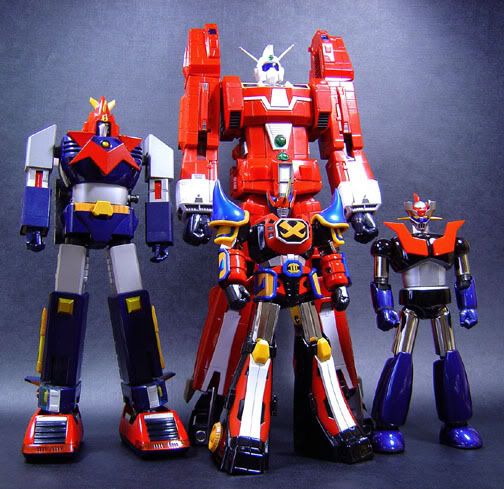 -diecast parts almost everywhere except for the blue parts of the shoulders, the chestplate cover, the covers for the TriThree compartments and the “backpack” and the hip skirtplates

-ratchet joints in the shoulders, knees. None in the elbows though.

-Lots of poseability. It captures the poses from the Anime accurately.

-There’s a hidden joint in the upper torso, it helps the toy to lean back a bit to do some of the poses.

-As with the other newer Brave Gokin releases, this one also comes with optional screw hole covers that you have to plug in yourself.

The Bad:
– I had a minor paint bleed in mine, I’m not sure if it’s paint or if it’s a paint chip. I guess it’s isolated to just my unit though. 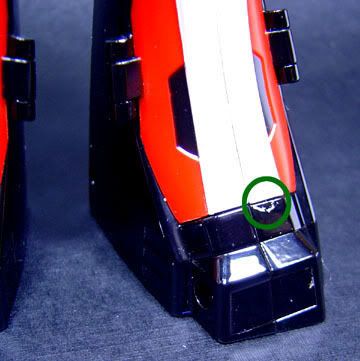 -It would’ve been nice if they made the toy a bit taller, however, currently it stands at 7 Inches tall. I guess it’s not that bad.

-The leg compartments for the TriThree are somewhat difficult to open. To open them, try to open the hatches on the outer sides of the leg first.

The Ugly:
-Chromed as the weapons are, they’ve got a lot of scratches right out of the box. But not as bad as Takara’s chromed parts on the MPC Exkaiser.

-Very rubbery hands. It feels like soft rubber. I’m not sure if these will become sticky or degrade quickly over time. But the good news is they’re not sticky when you open them for the first time out of the box.

In conclusion, The toy is very solid, no breakable parts. Great to look at and can do several Anime Accurate poses. The colors are very eye catching, it turns heads even on a crowded display shelf.

Funfact: in the Anime there was a “clone” of Goshogun used by the enemy. It looked almost exactly like Goshogun except for the parts that are blue are now colored green and it sports a slightly different horn on his head.

Funfact 2: Apart from the series, there was a one shot movie called “The Time Etranger”, set 40 years after the Goshogun series. Strangely enough, the Goshogun robot did not appear in the movie and the story and action focused mainly on the pilots themselves.