Some of the pics are thumbnails. Please click to view larger images.

The Hong Kong Limited version is limited to 300 units only, it doesn’t have any chromed parts and instead has flat gold finish. I decided to get it just to try something different.

Trays (note the missing Protect Shade and display base accessories).

Gaigar with both Gao Machines

Some notes on “Final Fusion”

Admittedly, I made a mistake in the transformation and didn’t slide these clips all the way in (they’re supposed to lock in place if done right), making the lion’s mane misaligned. Silly me.

New designed lock for clipping onto Gaigar, unfortunately, this section is now plastic (it was diecast on the first release, this was probably made plastic to minimize scratching I guess) 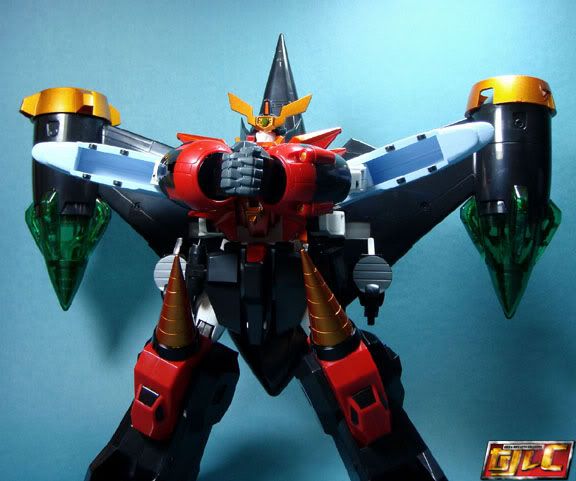 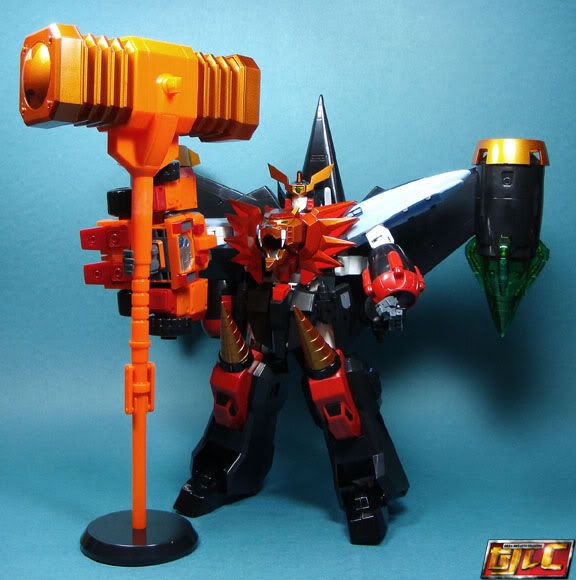 Linear Gao (Ver 2.0 on the bottom, note the redesigned transformation removing the need to take out the plastic cover)

A different take, using the “shiny” Goldion Hammer with the “non-shiny” Star Gaogaigar 2.0.

Without the Marg Arm.

I’ve got to say, the diecast parts now really balance the toy, making the Star GGG stable enough to be displayed without the support prop behind it.

-Improved connections for the Lion’s mane.

-New designed locks for the Lion’s mane to the Gaigar.

-Added paint for the Lion’s fangs.

-Articulated fingers are a blast to pose!

-Comparison of the weight thanks to the added diecast parts.

Side note about disconnecting the Drill Gaos: Even though the knees are now diecast I still prefer pushing out Gaigar’s feet through the heels to prevent any accidents (this is how I disconnect the Gaigar on the plastic knee versions too). The Gaigar’s claws are sharp so use a piece of cloth to push out the feet or else you’ll hurt yourself.

That’s about it, not too many negatives, they fixed almost all the issues that were the cause of criticism in the first release. Personally, the most frustratiing problem would be…

The Ugly
The Fists!!! I was totally happy with my Star GGG 2.0 until I was disconnecting everything to return into the box and the fist disconnected at the wrong end.

I really, really wished they gave more thought about this. The peg will definitely give every time you “unplug” or swap out the wrists from the forearms. It’s a given.

You can reattach the peg back in but it will wear down eventually every time you swap out the fists (not a problem with previous releases). Very annoying.

Overall, I love this new release, it’s just a shame that these “fixes” and improvements weren’t done sooner (like for the first release of Genesic Gaogaigar and Gaofighgar).

The high price tag might be a turn off but if you’re a Gaogaigar fan, then this one won’t disappoint (except maybe for the fists). Even if you already have the Star GGG first release, you might want to check out this one, the improvements are very worth getting a second Star GGG IMHO.