The box for the DX version is surprisingly huge! Measures roughly 18x14x3 Inches or so. It’s a nice “blast from the past” since the art is reminiscent of the old Bullmark Vintage toy’s box art. But sadly, it’s a headache to ship and store since it’s so big (as opposed to how compact the Brave Gokins are usually packed)

Tray (doesn’t look a thing like the Bullmark inner tray)

With the mini version of the Mekanda Max that plugs into Mekanda.

To “dock” with the Mekanda, the mini Mekanda Max needs to have the front part pulled out to fit into the “backpack” 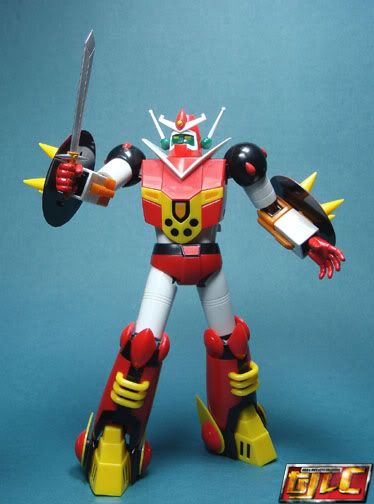 A concept that appeared in the first half of the series was the Omega Missile, which was fired from a Doron Empire satellite in space whenever Mekanda Max and Mekanda Robot combined and the Nuclear reactor on board Mekanda would activate, giving it a time limit of sorts.

Mekanda would often have less than 3 minutes to destroy his enemy and disengage the Mekanda Max to prevent the Omega Missile from hitting. It took the humans quite some time to figure out how to shoot down the satellite from orbit.

Hmm.. a poop-covered missile, not the coolest looking weapon.

In one episode, the Mekanda Max was damaged and the pilots had to deploy using the new Tri Cars, the Tri Cars performed just like the Mekanda Jets, so they could also combine into a single unit and merge with Mekanda Robo.

A mini version of the Tri Car is included with the set.

Plugging into Mekanda’s back also requires disconnecting the front part.

Around the middle of the series, Mekanda was totally destroyed while fighting Jimmy Orion’s brainwashed mother, Professor Shikishima would make a second Mekanda Robot from scratch which would be launched from individual ships and combine and then GROW into full size, (defying the laws of physics and the conservation of mass I bet)

The arms plug into the sides of the Mekanda 1.

The antennae can come off by the way.

Mekanda Tri Car B3 is refitted with the torso (Mekanda Base).

Be careful of the sharp points on the Mekanda Tri Car B3, they are insanely sharp!!

The Tri Cars would then “park” into Mekanda’s feet.

The show was often plagued with production and budget problems so a lot (and I mean a LOT!!) of the scenes were recycled, hence a lot of the enemies Mekanda defeated would repeatedly reappear in several episodes as a result.

The Good
-using clear parts for attaching the Mekanda parts to the vehicles was a clever idea.

-Lots of accessories straight from the show.

-The ball-jointed ankles were a nice touch.

-For all intents and purposes, it’s the most accurate representation of Mekanda Robot in toy form.

The Bad
-Said “Revoltech” joints are solid but the way they plug into the arms and legs is pretty loose.

-This particularly gave me a headache, whenever you disconnect the Mekanda’s legs to return to storage, the hip joint disconnects, I had to very, VERY carefully use pliers to yank out the “Revoltech Joint” from the thigh. Not fun…

-Paint bleeds here and there (kind of annoying for such an expensive item).

-while the shield does come with an optional “handle” accessory, I don’t recommend having Mekanda use it, as the “open hands” are somewhat stiff and the fingers might break off if forced to fit the shield handle in.

-No firing gimmicks or any gimmicks for that matter (c’mon, the Brave Gokin Goshogun had a spring released “Go Flasher” and the Patlabor had LEDs and they were priced the same as this one!)

-Some bad plastic molding. I had to cut out a leftover piece of the “Revoltech Joint” in the elbow to make the Mekanda Rocket guns workable (the joint on the right arm was too long). Tsk Tsk.

I wouldn’t normally mind getting a plastic figure of a classic robot if this was all that was available on the market since the last 25 years, but this was just a case of the wrong stuff. The plastic isn’t even the kind of plastic you would see on a Master Grade Gundam kit. The edges are rough and the material feels cheap. I think I would’ve gotten more satisfaction if they had used the same PVC material they have been using for the Brave Mechanical Action Series figures.

While CM’s did address the complaints about the MAS line’s joint problems by using “Revoltech joints” it seems like they blew it with the way the joints plugged into the toy’s body parts (some too loose, some too tight, like the groin joint pic I posted above).

The high price point isn’t helping either. Sadly, at the end of it all, it feels like shelling out $120 for a poorly-made 7″ Revoltech figure.

I didn’t get the Standard version but as far as I could tell it seems to be the same toy (lacking only the big vehicles)? I’m not 100% sure about this though.

Bottom line, if you’re a die hard fan of Mekanda robot with $120 to spend this might be worth getting, at least as a place holder on your shelf until someone makes a diecast version (which may or may not ever happen). Otherwise, it might be better not to even consider getting this, or at least if you’re going to consider getting it, the cheaper $60 Standard version might be more palatable.

Funfact: Jimmy Orion was voiced by Akira Kamiya (Daimos, Gaiking, Getter Robo), you can even hear him say “Switch On!” in the next episode previews of Mekanda Robo. 🙂