Well.. we finally get Catwoman in her New Batman Adventures design. Personally, I never liked this take on Catwoman, the design is too oversimplified and for Pete’s sake why is her face blue? For me the best Animated design take on Catwoman is from the one-shot short (the one with the pole dance scene), as it’s closest to the Jim Lee “Hush” saga design.

She still comes with her pet cat, Isis, which is a retool/ repaint of the previous version (now comes with a collar).

Of course, Catwoman still comes with her indespensible whip. It’s a shame she doesn’t come with any stolen jewels or anything for accessories.

Here’s the link to the original BTAS version Catwoman. 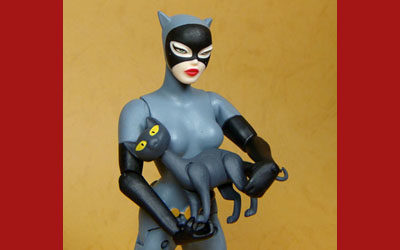 I recommend checking out the video of “Chase Me” over at Youtube. One of the best Batman Animated shorts, IMHO.