Ahh, Edward Nigma, aka the Riddler. He was always one of my favorite villains. The main baddie who could try to take on the big, bad Bat with brains rather than brawn. I loved the characters appearances in the BTAS episodes.

Sadly, under the New Batman Adventures redesign, it seems like they added a bit too much retro (a la Frank Gorshin) to the costume appearance. He looks too much like a henchman now rather than the iconic Riddler. He’s probably the redesign I dislike second-most in the NBA series (Catwoman gets top spot). He also didn’t have much screen time in the New Batman Adventures, usually appearing only as a background character with no episode dedicated to him, unlike in the original BTAS run.

His only accessory (apart from the display base and extra hands), the question mark cane.

Hmm… here’s a thought. It might be fun army build this guy and make him into a Riddler goon.

For some reason, Sting’s “Englishman in New York” keeps playing in my head….

Here’s the link to the BTAS version of Riddler: 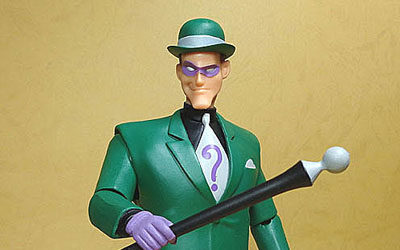