Personally, I don’t know how Mattel could approve this large gapping void right there. Feels like the Soultaker should’ve been placed there instead?

I find it very ironic that this is the last series from Mattel, all the while indicating Batman’s 80th Anniversary on the packaging.

Anatoli Knyazev is a trained Soviet KGB operative. Ruthless and determined, when he was first introduced in the series “Ten Nights of the Beast” as a nemesis for Batman, the Dark Knight was unable to prevent several high profile assassinations by the Beast.

Knives can be sheathed on his legs.

I find it curious that KGBeast comes with two knives, despite being only able to hold one at a time?

Interestingly, the figure sports “briefs” to cover up the joints in his pelvic area.

After an encounter with Batman capturing KGBeast by tying his left hand, the latter escapes by chopping it off with an axe and later replacing the lost limb with a cybernetic projectile launcher.

I’m not entirely sure what this thing is, but I tried plugging it into the weapon arm and it fits in only halfway. Odd. 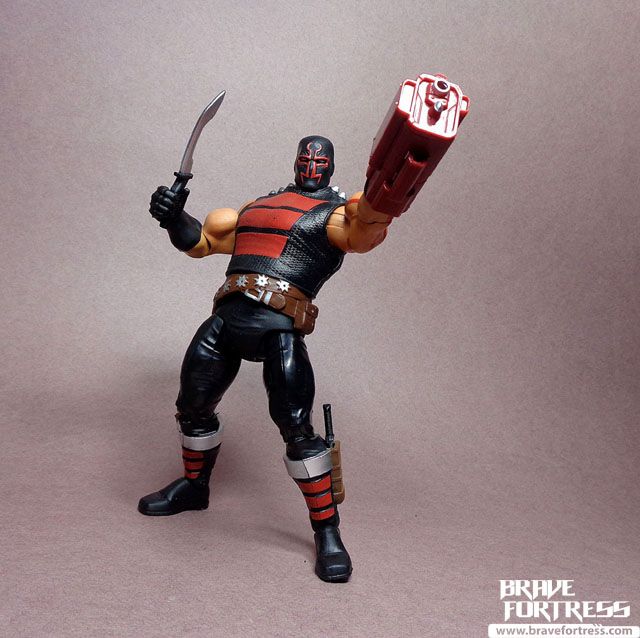 In the events of One Year Later, KGBeast is murdered (along with Magpie, Ventriloquist and Orca) by Tally Man who frames a reformed Two-Face. KGBeast is later seen as one of the revived Black Lanterns in Blackest Knight. He later is restored back to life somehow following the events of Flashpoint

Tatsu Yamashiro is a skilled martial artist and master swordsman, wielding the Soultaker sword which holds the soul of her husband who was murdered by his brother, she is an active member of Batman’s Outsiders.

Thanks to her time with the Outsiders and Batman, Tatsu also gains tactical skills, which she applies as co-captain of the Suicide Squad.

Her Soultaker sword is capable of holding onto the souls of those it kills and those souls even speak with the wielder of the sword, including the members of Katana’s murdered family.

Butler, friend, father figure. Alfred really is the best thing in Bruce Wayne’s life. I really can’t imagine how Batman can function without this guy in his corner.

Uhh.. interesting design choice here, I never saw Alfred have a bald spot here before, I guess the stress of being Batman’s butler must be getting to the old chap.

Alfred comes with a serving tray.

Along with a glass (of water?) and Batman’s mask. Really cool accessories really.

Alfred can hold onto his serving tray thanks to the way his left thumb is sculpted. Thumbs up there, old bean!

Alfred also comes with alternate heads. This one is his Earth-3 (the Crime Syndicate’s universe) evil counterpart, the Outsider, who works as a butler and emissary for Owlman.

Supposedly, his skin is white after an encounter with the “good guy” Joker on Earth-3, who doses him with a type of Joker gas. This leads the Outsider having permanently bleached skin and occassionally laugh out uncontrollably sometimes. As the Outsider, evil Alfred possesses no real powers but does somehow have the ability to prevent telepaths from reading his mind.

Another alternate head included for Alfred is based on the late actor Michael Gough, who played the faithful butler across all 1990s Batman films.

Lastly, the set also comes with another alternate head for Alfred, based on the likeness of late actor Alan Napier, who played the Dynamic Duo’s manservant on the 1966 live action TV show.

From villain to anti-hero, Jason Todd’s story is a complicated one. When they first brought him back to life, DC originally wrote him up as a supervillain, who committed criminal acts and even wanton murders to frame Nightwing. Funny how Jason was never made to face justice for those murders now that I think about it…

His only accessories are a spare “unmasked” head and hands. I can’t believe Mattel didn’t give him any guns to work with?

His guns are sculpted into his holster, they cannot be removed.

Yeaaah… Red Hood seems really off without his guns.

Tip: for some reason, the Red Hood head has a really deep head cavity for the neck ball joint, this causes the head to sink too much and make Jason seem like he doesn’t have a neck. To fix this, try pushing the head only halfway down. this will make up for the height of the neck and improve the figure’s proportions.

Following the events of Final Crisis, where Bruce Wayne is killed by Darkseid (he got better), Dick Grayson takes up the mantle of the Bat and becomes the Dark Knight for a while.

You can tell it’s Dick in there thanks to him smiling. Geez.. talk about out of character.

… along with slightly different gauntlets from the classic design.

While the cape is soft goods (which I like), annoyingly, the piece is really small, making it look really lame. I wish they made it wider.

Since Damian Wayne came into the Bat-family’s life and took up the name Robin, Tim Drake decided to change his title to Red Robin so there wouldn’t be any confusion (ugh…)

Sigh.. the tray messed up the cape on my figure. I hate it when that happens.

Yep.. RR for “Red Robin”, that makes a world of difference (sarcasm…)

Tim still comes with his favorite weapon of choice, a collapsible Bo staff.

I don’t care what anyone says, Tim’s still my favorite Robin.

Hmmm… I guess the height for these guys is .. ok? Too bad they’re a bit taller than the older DCUC figures so it might be hard to put them along with them? I have to go back one time and get them all out to check.

Waylon Jones was originally a two-bit thug with a skin condition, often working as hired muscle by the more theatrical of Batman’s rogues gallery. Over time, this was retconned to Croc having a metagene which activates a form of Atavism (reverting to something primal or bestial) . He is currently in a relationship with fellow Suicide Squad member Enchantress.

Thanks to his bestial traits, Croc’s skin is resistant to bullets, he also has sharp claws and teeth, along with increased strength.

Unfortunately, Croc isn’t very bright, he functions more via instinct than rational thought, making him easy to outmaneuver in battle.

He shares some parts with the CNC King Shark figure.

Their feet are different though.

Croc’s jaw can be opened.

I REALLY find Croc to be too big.

Well… this is it. The final DC figures from Mattel. It’s been a crazy, crazy 11-year (DCUC launched in 2008) ride! Mattel gave us some solid character groups, despite a few hiccups in sculpt. I think this toyline is the most comprehensive in terms of characters for DC, only second to the JLU figure line. Not even the DC Direct line was able to crank out such an assortment. It’s a shame to see it end but I guess that’s the way of things. I think I will be happy to end my DC figure collecting here with no regrets. I’ll maybe an occasional McFarlane DC figure to supplement my collection (Hellbat Armor), we’ll see.