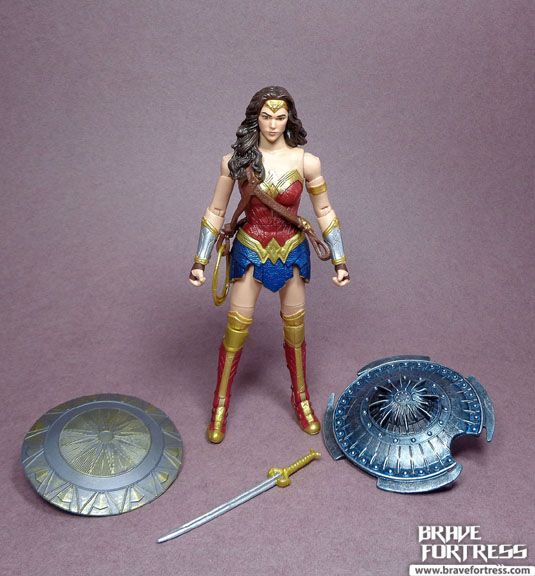 First off, hats off to the cast and crew of the Wonder Woman movie for making a very enjoyable modern day DC movie. I haven’t enjoyed any of the DC movies starting with Superman Man of Steel, but this one really worked and I’m glad, it gives me hope the JLA movie might actually be worth watching now.

Which brings us to this toy. This version the Themysciran princess is only available at Toys R Us, it is not available at other retailers. Which really sucks as the only other WW figures in the mass retail wave are the ones with her in a robe and her in her island garb. It makes no sense.

The figure is a huge improvement over the one that came with the Movie Masters BVS wave. The head has been retooled to better capture the look of actress Gal Gadot.

The figure does seem too chunky compared to the actual frame of Gal Gadot, but I’m OK with that, as I always preferred an Amazonian Wonder Woman to realistically look more like Xena, the warrior princess, than a fashion supermodel with a skinny frame.

The “godkiller” sword can be stored in the loop on her belt.

She also comes with her magic lasso, but it’s permanently looped onto her belt.

Wonder Woman comes with 2 shields. The bigger one is for the CNC figure of the wave, movie Ares, the God of War.

Speaking of Ares, I find it really odd why the movie version looks nothing like the CNC toy depicted on the back of the box. Some sort of miscommunication between Mattel and the studio? Whatever the reason, it’s another negative mark for the toyline IMHO.

For folks who aren’t able to get their hands on this TRU exclusive figure, don’t worry. Mattel just revealed the Movie Masters JLA movie figures and it looks like the figure will be a reuse of this mold (possibly missing the shield and sword accessory though).