For some strange reason, my unit came slathered in lubricant. I had to wipe him down. Hopefully, for those who collect sealed figures, the lubricant won’t stain over time if left unresolved.

As usual, the figure arrives somewhat mistransformed right out of the box. Here are a few things to look out for to set things right.

SUPER IMPORTANT#1
This dorsal fin is supposed to be folded down, BUT, when returning the figure to the tray, make sure this is set in this position to prevent breakage!

Remember to flip out his shoulder pylons. I totally missed this the first time around, which is why some of the photos are missing them (sorry, it was getting very late and I just didn’t have the energy to redo the whole lot).

These panels have to be folded down so that the rear skirt plate will collapse flush and also give wider range of motion for posing the legs (makes me wonder why FT didn’t do this from the outset).

Rotate the heels. They should be oriented like this to balance the figure:

SUPER IMPORTANT#2!
Be mindful of this “T”-bar since it’s painted metal and transforming the figure automatically means you have to snap certain panels onto it, resulting in paint chipping. It makes me kinda wish we didn’t have this bar at all, if this was going to be an issue.

Astrotrain wasn’t given much of a personality in the cartoons and even in his G1 toy bio. He did feature prominently in the episode Triple Takeover and later often served as a troop transport unit for the Decepticons in space missions.

He comes with his “Ionic Displacer Rifle”.

Thomas features an alternate “angry” face. To swap the faceplates, you have to remove the front of the helmet first.

Lastly, for the robot mode, the set also features an optional chest panel for when you want to recreate his G1 toy look. The plate just simply plugs into the center of his chest.

Again, good tooling here, as opposed to just simply painting a flat plastic piece and calling it a day.

Remember to flip out these panels for show accuracy. It’s amazing how Fans Toys engineers thought up this stuff! 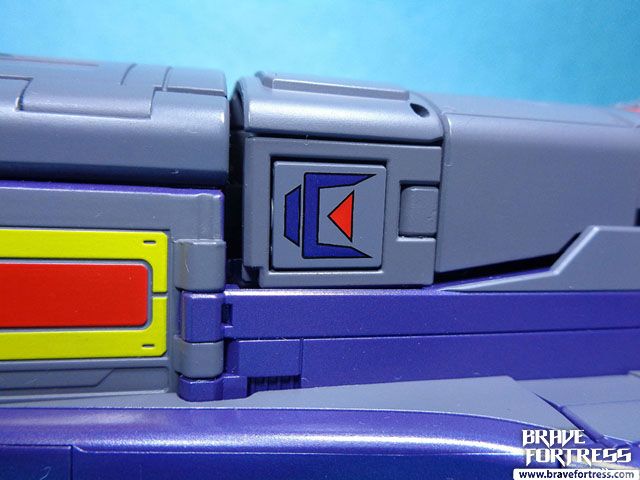 His rifle can be plugged into the side of the shuttle mode (forgot to take pic of this).

It’s fun to see the coupling rods link up and move when you roll the wheels on the train. Just amazing how they thought to include that.

In train mode, the rifle can be stowed underneath the front of the train (again, forgot to take a photo of this).

Be mindful not to lose this piece (the safety valve? whistle?) it VERY EASILY pops off when transforming this guy, since it’s not glued in place.

Display base – the set comes with a multi-positional “scaffolding” unit for propping up the figure. It’s pretty neat.

Folding this down can be a nerve-wracking, as the clearances are tight and the material is clear plastic, so you would probably crack something given time and repeated wear and tear, I imagine.

A lot of hidden supports in the train tracks, this is all so you can fold up the scaffolding to support the shuttle mode in flight pose.

The bottom of the shuttle plugs in here:

“Train tracks” mode for the display base. The train can actually roll on the tracks, which is really impressive.

Overall, another great piece from Fans Toys. I love the little touches here and there that add interesting details to an otherwise bland cartoon design. It captures the look of all three modes beautifully for the most part (just don’t look at Thomas’ back) and it’s got a good balance of diecast and plastic materials.

Sadly, the figure is not perfect though, as much as I love the engineering on this figure, I do wish FT let up a bit on the clearances and the constant need of their releases to tab in 100% perfectly. This often results in friction which then give unwanted paint chips (that crotch area). I ended up choosing not to force certain panels to fit together in the alt modes for fear of chipping the paint somewhere underneath. I wish they made their panels fit together easier (i.e. more allowances to fit in).

Funfact In the Transformers Vs. G.i. Joe crossover by Tom Scioli, we see Astrotrain as the counterpart for Omega Supreme, which makes sense, since he can transport the whole Decepticon army inside him. Interesting perspective.