By far this is the most “toon-accurate” Hooded Cobra Commander.

With the Pyramid of Darkness Hooded CC.

Chormed face plate (the helmet is glued onto the vac-metal inner head), fixed arms and “sculpted-on” goggles. If only Hasbro had released this version on the single card instead of the crappy first version. Also, this figure is easier to stand without the base thanks to the improved ankle joints.

A straight-up repaint of the Zartan from Wave 11 except for the leg gear. I think the leg gear is more toon accurate (Zartan’s shoes should be grey).

A simple armor swap is all that’s needed to make him more “toon-accurate”.

I’m glad they gave us Duke instead of Shipwreck’s mug .

With the first version Zartan.

I think I still prefer the first version. This version also lacks a backpack.

New heels for the second version, makes it easier for Baroness to stand without the base.

Come with grappling hook and Nunchucks.

Still not quite “toon-accurate” enough, the upcoming “Hall of Heroes” Storm Shadow looks to be the best one. 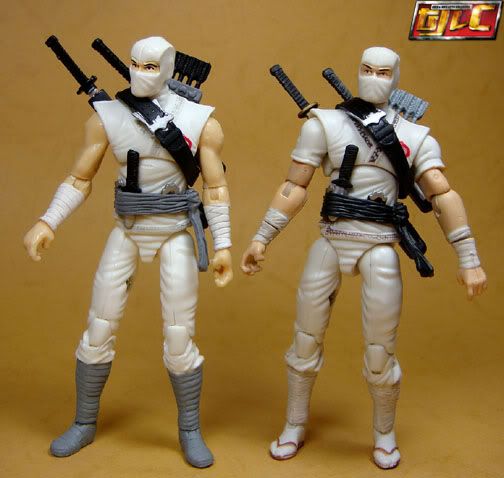 Same as Snake Eyes, the Arashikage symbol is painted on this version’s sword.