A proficient arms dealer, Destro aligns himself with Cobra to spread chaos and increase his profits from the weapons sold to both sides of any conflict. 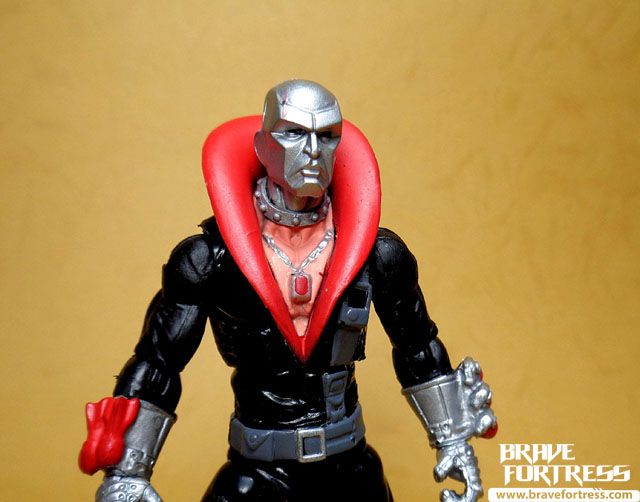 A reissue of the 50th Anniversary “Eagles’ Edge” 3-pack Destro, this one has better cartoon accurate colors, thanks to the gray boots.

The reissue Destro would’ve been near perfect, had they not decided to paint that weird gray stripe on his body where his communicator is, it just stands out too much.

Destro comes with a case that carries parts for a long range rifle.

By default, the case has the following parts already inside: the stand, extra ammo cartridges and a (fixed molded) strap.

Fully assembled, the rifle can’t use the extra ammo clips or the strap.

Not bad, but I do wish it came wit his classic pistol instead of this long, cumbersome rifle.

Roadblock is the Joe team’s heavy machine gunner. Being one of the few on the team capable of lugging around a .50 caliber heavy artillery with ease, he’s the guy they call to lay down suppression fire to get the Joes out of a jam.

The body is a reuse of the G.i. Joe Retaliation movie Roadblock body, with a new head sculpt.

Impressively, the vest can be removed to reveal a “classic-painted” tank top.

He comes with a light machine gun (LMG). 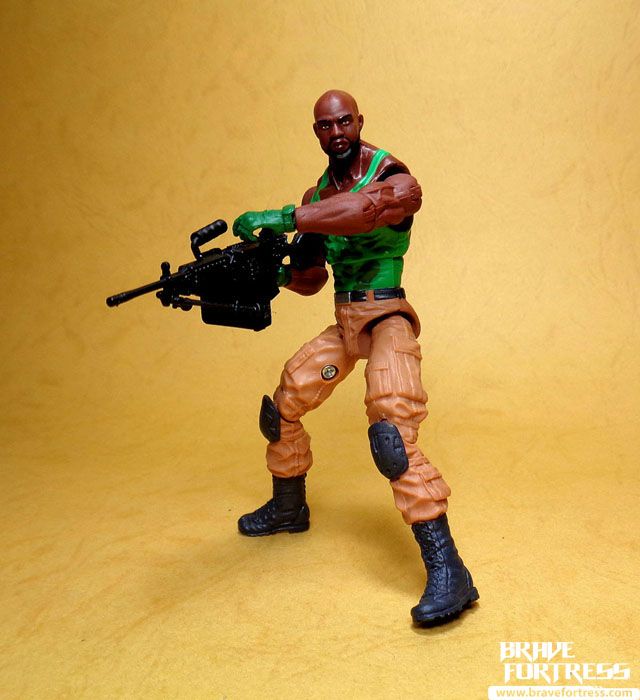 When LMGs dont’ do the trick, then it’s time for Marvin to bust out his “Ma Deuce” heavy machine gun.

One of the original 13 members of the elite G.i. Joe team, Scarlett is skilled in various forms of hand-to-hand combat and small arms. She is also a capable tactician and field commander for the team. Her weapon of choice is her crossbow.

The figure uses a new head sculpt, while the body is a reuse of Shooter’s torso from the 50th Anniversary “Special Forces” 3-pack, minus the sidearm holster on the right thigh.

Ugh.. her webgear is just all wrong, thanks to her hip pouches getting in the way… C’mon hasbro…

I wish she had full forearm gloves to make her cartoon accurate, the yellow gloves just aren’t cutting it.

She comes with her crossbow.

She also has a quiver full of arrows to reload with.

Overall, not bad, but I do wish we can do something about the gloves. This would’ve been so perfect if they got the gloves right. Sigh…

This is probably the only time I’m getting a full wave of the Retro figures, as most of the line up are rehashes of previously released molds. This is the only wave that felt worth getting a full set of.