Since the Cobra Island figures are generally Target Exclusives, they fall into a different count as a “wave” at mass retail.

Cobra’s saboteur, Firefly. It takes real guts to get behind enemy lines undiscovered, set up explosives and then sneak back out. The Joes have had more than their fair share of being taken out of action or sabotaged more than once thanks to this sneaky Cobra agent.

His boots are decent enough to not require rotating this time around (lol).

Yikes, what have you been sitting on, Firefly?? A bear trap??

Firefly for the Classified line comes outfitted with an odd “bomb squad” armor. I’m not sure how this is practical since I don’t think one can run or even move fast with this thing on. The armor itself cannot be removed from the figure without popping an arm off first. Talk about strange design choice.

The goggles can be lowered over his eyes.

For weapons, the figure comes with a big pistol.

The pistol can be stored on his backpack.

The explosives can be pegged onto the bottom of his backpack.

Lastly, the ace saboteur comes with a drone to carry out more dangerous missions.

The drone can be stored on his backpack when not deployed. 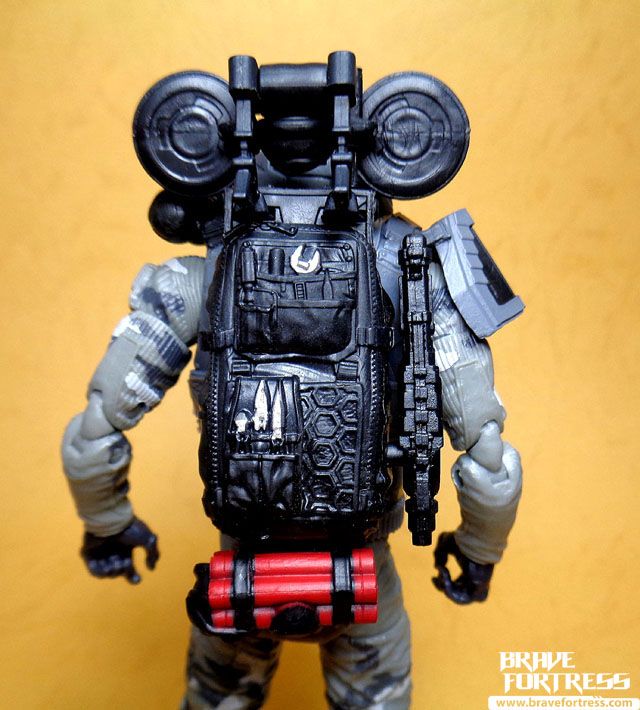 The explosives can be loaded onto the drone’s skis to have it transport to its target.

I think it’s pretty cool we get a remote control pad for the drone to boot!

Like everything else, you can also place the drone remote pad into the backpack. Clever!

Overall, a pretty decent version of Firefly. I just wish the armor was removable, or he had a different design take for his torso area. But the figure’s gear is really where this set really shines. I love the drone, the hidden compartment for the control pad, even the painted “tools” on the backpack, it’s an impressive set of bonuses and I hope Hasbro keeps this up for other upcoming G.i. Joe Classified figures.

6/7/22 Addendum: After finally playing the G.i. Joe: Operation Blackout game, it seems this figure was indeed meant to represent Firefly’s looks from the game, complete with the “drone on his backpack” look. The toy, however does not come with his default weapon in the game, the M.A.R.S. Boomslang RW-122 grenade launcher.

The Cobra Organization’s lowest ranking “grunts”. These guys are what Cobra throws at the Joes as cannon fodder. These faceless legions make up the backbone of Cobra’s army, with those with unique skills later on qualifying to move up the organizational chart into “specialized” roles, such as Eels and Strato-Vipers.

Personally though, I consider the troopers and infantry as the lowest ranking Cobra members and the Vipers are the step above that level, seeing as how they look more “elite” thanks to their cooler-looking gear.

While the figure does come with moving goggles, they can’t be lowered down to their eye level as the bands of the goggles are too short to get past the helmet’s brow line.

While we never saw Vipers wearing neckerchiefs back in the old Sunbow cartoons, Hasbro decided to give us this accessory anyway.

I’m not sure if they look better or worse with the neckerchief on. Too stylish for low level troopers?

I love how Hasbro designed the Vipers’ backpack. Lots of cool details on it.

His sidearm can be holstered on his right leg.

While I do miss the classic Viper rifle, this new one isn’t too shabby, at least they didn’t paint it gold or anything too wild.

Note: Viper and Firefly were originally released as a case of 3x Viper and 3x Firefly in a case of 6, before the Major Bludd wave.