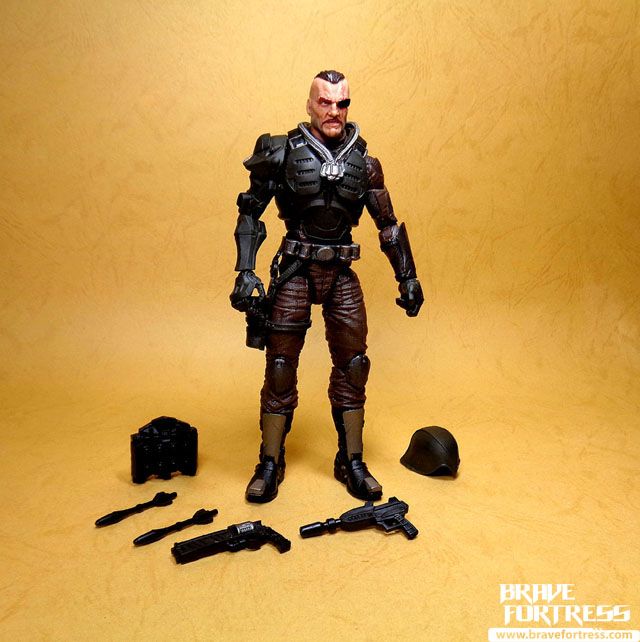 Major Bludd is a mercenary who works the highest bidder (usually Cobra). Cold, calculating and brutal, the Major almost always gets the job done with ruthless efficiency.

Thanks to various dangerous missions the good major’s been on, he’s lost his eye and his right arm and had them replaced with cybernetics.

He has a LOT of dogtags, he takes them from his victims (usually military targets), that he killed while “on the job”, as trophies. Morbid….

Major Bludd comes with a huge revolver for a sidearm.

The revolver can be holstered on his right leg.

I don’t think anyone can fire that huge weapon unless they had a cybernetic arm. The recoil looks like it hurts.

Last but not least, Major Bludd comes with his iconic rocket gun.

His spare rockets can be stored on his backpack.

His rocket gun can also be pegged onto the left side of the backpack. 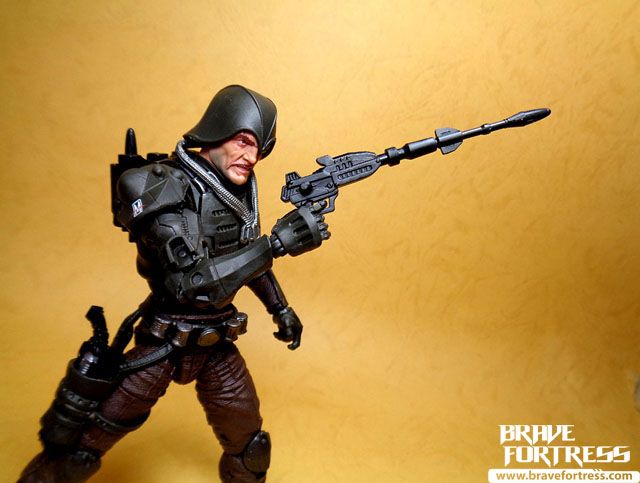 I didn’t really think much of Major Bludd back in the old Sunbow cartoon days, as he was just “kind of there” for Cobra Commander or Destro to yell at. It wasn’t until I read the 2019 IDW G.i. Joe “Castlefall” comic that I got to see how dangerous Bludd really was, even if it was set in a different canon, it was a good, refreshing take on the character and showed how one man can change the outcome of something grand.

Overall, I love this figure! Easily the best Cobra figure by far (well, maybe after Destro). I actually never realized his arm was mechanical until this figure, I always thought it was some sort of armor or something. The figure looks really good and while it doesn’t match the Sunbow design, it looks close enough to the classic toy. A must have figure for me!

*note that Major Bludd is the only “new” figure in this wave, he was offered as a solid case of 6, or a mixed figure case of 6, consisting of 2 Bludds, alongside 2 Cobra Vipers and 2 Fireflies.