Personally, the packaging is a miss for me, I miss the classic filecards on the back and the mixed use of various styles of character art on the front and sides of the box annoys the heck out of me. I wish Hasbro kept the art style more uniform, like how it is with their War for Cybertron lines.

The Joe team’s heavy artillery machine gunner. Roadblock is also an expert chef and loves to occassionally rhyme when making declarative sentences. I decided to go with the version 2.0 of this figure since I really dislike the ostentatious deco of his shin guards on the original release.

Roadblock’s left arm features a lion tattoo, which is a new concept for this character since he never sported any tattoos before.

The knife in his vest is removable.

Hasbro decided to turn all the real-world guns in this toyline into fictional energy-firing weapons. I’m honestly not really sure how I feel about that. The old cartoons did have them shooting lasers all the time, but somehow seeing the 3.75″ toys sport real weapons seemed cool too.

The “battery pack” can be removed from his heavy artillery.

The silent, deadly Arashikage master ninja of the G.i. Joe team. Snake Eye’s real name is classified even in the comics, we only see glimpses of his origins. He is an American soldier who becomes horribly disfigured in the battlefield while saving his teammates including Stalker and Tomy “Storm-Shadow” Arashikage. Storm-Shadow takes him under his clan as a member of the Arashikage as thanks, where he undergoes training and learns and masters the way of the ninja.

He comes with a pistol and silencer, which can be holstered on his right thigh.

His left thigh has a sheath for his knife, but for whatever reason, the sheath isn’t hollowed out properly and the knife can’t go all the way in. One will have to manually drill into the sheath to fix the issue.

Lastly, Snake Eyes comes with a sub-machine gun of sorts.

His sword scabbard can be pegged directly into his back for a more classic look.

I really love how good this figure looks holding his sword!

His rifle can peg into his backpack.

The same hole can also hold his sword.

You can also actually peg the gun in first and then peg the sword into the gun to hold everything neatly together.

Laird James MacCullen Destro XXIV (Destro for short) is the owner of M.A.R.S. (Military Armament Research Syndicate) Industries and an arms dealer, often supplying weapons to the highest bidder regardless of allegiance in order to gain more profit. He often works with the Cobra organization to spread chaos and cause even more demand for his weapons.

Previously the figure came out with a circle sculpted on his crown for some reason, this was later dropped as a running change in later production batches of the figure. I decided to go for the one without the circle.

Destro’s briefcase. Only one side has a painted Cobra logo on it.

The inside of the case reveals some (non-removable) bricks of cash and a computer of sorts.

In a cool nod to the vintage toy, he has wrist-mounted rockets sculpted into his right gauntlet.

Lastly, he comes with his laser pistol.

Field team leader for G.i Joe. Conrad “Duke” Hauser is an All-American hero, always fighting for what’s right and never leaving a man behind, he will never rest until Cobra is stopped. In the Sunbow G.i Joe cartoons, Duke is second-in-command only to General Hawk, outranking everyone else despite his rank only being first sergeant as listed in the filecards.

I really wanted to open the version 2.0 of this figure, but seeing as how there doesn’t seem to be any local stores bringing this in, I guess I’ll have to settle for the version 1 for this guy for now.

These Iron Man-inspired shin guards are a REAL EYESORE, whoever thought up of these designs really needs to get slapped. Nobody likes them.

Fortunately, there is a quick fix for it, just spin them around and rotate the feet back, they’re now out of sight. Much better.

Another source of contention among fans is the choice of color for Duke’s watch. Seriously? Neon orange? Welcome to the 1990s? The V2 of this figure no longer has this stupid color scheme and the watch is painted dark green instead. I really need to get a V2.

Duke’s backpack has a non-removable shovel.

His sidearm can be holstered on his right thigh.

On your mark, get set…

Duke also comes with a high-tech version of his old binoculars.

The binoculars can be pegged onto his belt.

Scarlett is an expert marksman, martial artist and adept field tactical commander. Resourceful and cunning, she leads the Joe team operations in place of Duke and Hawk in some iterations in the comics. I preferred the version 1 of this figure, mainly due to the color of her pants. Though I do prefer the skin tone of the version 2.0 better. 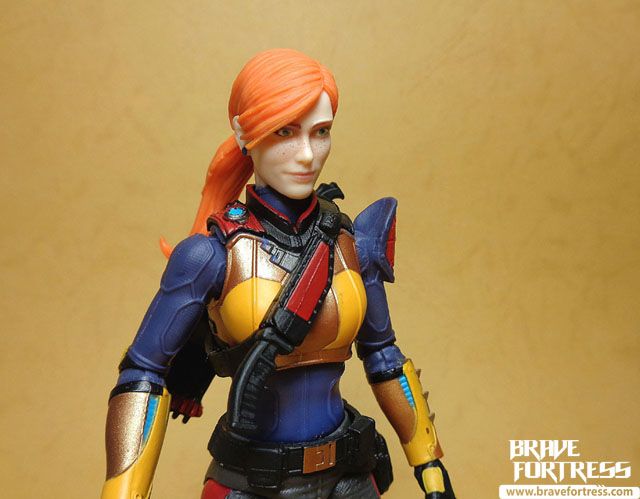 Her headsculpt is decent enough, but I do wish they went with a redder shade for her hair instead of making it orange. I also wish her pony tail was a bit more visual, you can hardly see it from most angles.

In the classic comics, she is romantically linked to Snake Eyes, while in the cartoons, she’s usually seen being close to Duke. Personally I prefer the Snake Eyes connection.

6/7/22 Addendum: After finally playing the G.i. Joe: Operation Blackout videogame, I just found out the names of the default goofy-looking weapons used by the Joe Classified gang.