I really love the way this artwork reflects the new expanded roster of the line.

Originally introduced as Cobra Commander’s bodyguard, Tomisaburo “Tommy” Arashikage was extremely loyal to the maniacal leader as a means to learn more information to track down his uncle’s (the Hard Master) killer. This would put him at odds with old friends Stalker and Snake Eyes, who had now joined G.i. Joe to stop Cobra.

While the overall look does closely resemble the character’s look from the Sunbow cartoons, it’s actually closer to his look from the G.i. Joe: Operation Blackout game.

Remember to attach the ribbon on his sash belt (it’s packed separately in the box).

Peg hole on his back for his backpack.

A lot of folks aren’t happy with how the backpack turned out, as going by the Sunbow animation models, the swords are supposed to be on his left and the arrows on the right. They got the order mixed up.

The ninja throwing stars on his belt are NOT removable.

Storm Shadow comes with an optional hood, remember to remove the default “folded down” hood collar first though.

The loose arrow can be stored into his backpack.

Bow can also be mounted onto the backpack for storage.

Personally, I prefer the non-hooded look for this guy, minus the collar, too.

Lastly, Storm Shadow comes comes with two swords, a short and a long sword. The swords when used in tandem are called Daisho, meaning “big-little”, giving the samurai (aka swordsman) more versatility in combat. The shorter sword is called the Wakizashi and used for close quarters combat or to behead an opponent.

Impressively, thanks to the soft ratchet joints, this figure can hold a high-kick pose relatively well.

A truly awesome figure. Though, for the sake of cartoon accuracy, he needs to also have non-gloved hands. You can easily remedy this if you have Wenwu (Shang-Chi’s dad) from the Marvel Legends Shang-Chi wave. Just use his hands on Storm Shadow as a fix (even the skin tones match). Alternately, the upcoming retro/ vintage carded Storm Shadow will come without gloves as well, but will be lacking the hood accessory.

The matchup we never got in the Sunbow cartoons. For some reason, the connection between Snake Eyes and Storm Shadow is never mentioned or explored even once in the original cartoon continuity. Strange… 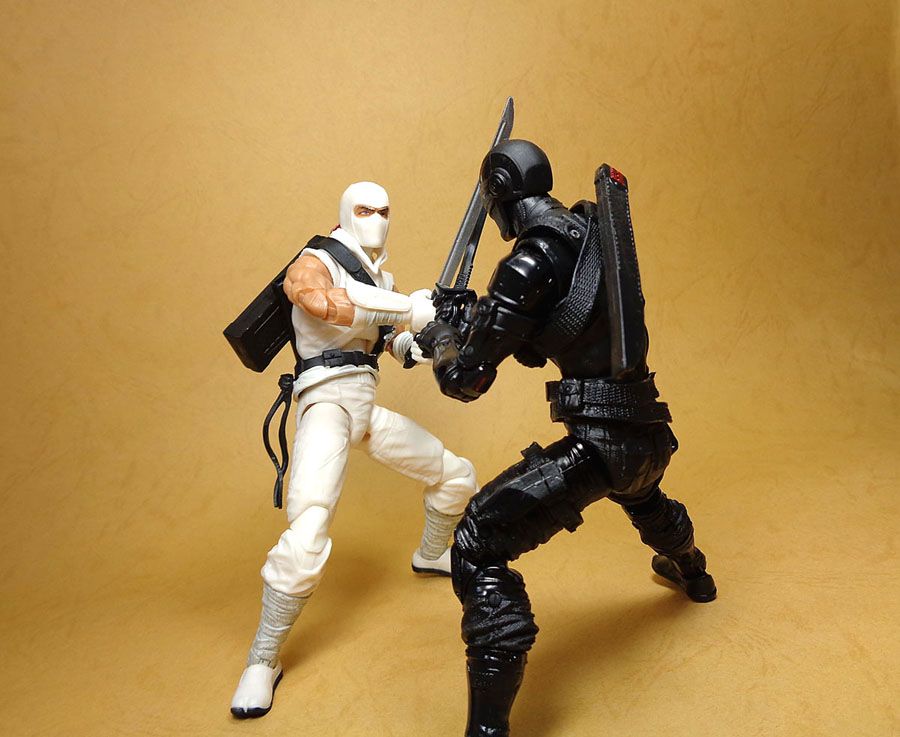 The G.i. Joe team’s original tracker, Charlie (his real name) Iron-Knife is a Native American that often appeared as a nemesis of sorts for Storm Shadow in the Sunbow cartoons (the Snake Eyes rivalry is never explored there for some reason). When not in a life-or-death struggle with the Cobra ninja master, he was often seen as a medicine man and shaman helping mend wounded Joes.

Great sculpt work here, while it may not exactly capture the look of Spirit from the Sunbow cartoons, it certainly still an impressive modern take of the Joe team’s resident Native American Shaman.

I’m not quite sure what to make of this patch on his shoulder. Does it signify any particular symbol?

He comes with a removable combat knife and a sidearm.

Spirit comes with a sniper rifle, too bad it’s not a replica of his original Remington Sniper rifle from the old toyline to give a more “classic” feel to the figure, ah well. It does still feature a removable ammo magazine, though.

The Sniper rifle can be stowed on his backpack. 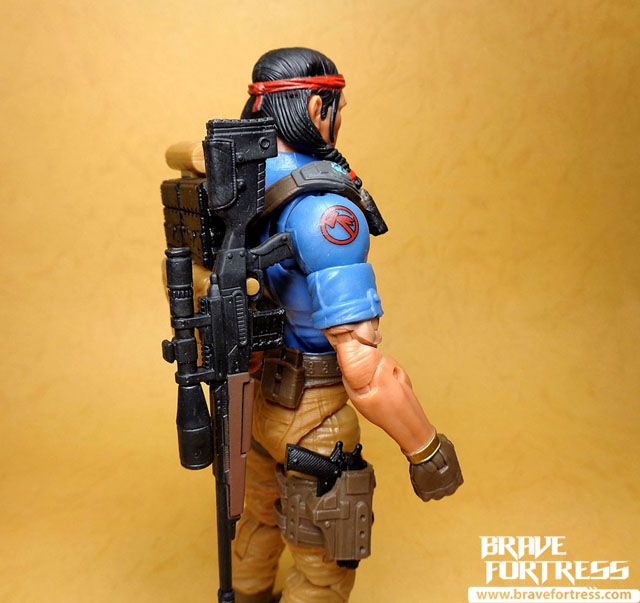 I’m really impressed Hasbro was able to incorporate so much articulation into this little guy, they could’ve just made it a static figure like with the older figures, but they opted to make this guy better. Kudos, Hasbro design team.

Freedom can perch on Spirit’s backpack.

Freedom can also perch directly onto Spirit’s gauntlet as well.

Fun fact, Bald Eagles can live up to 30 years in the wild.

Always making life hard for Storm Shadow. In the Sunbow toons, we never get to see Stormy go up against Snake Eyes, just Spirit. How the match always ends with a draw is beyond me (Storm Shadow is a ninja master and heir to the Arashikage clan, how can he lose to anyone??). Maybe he’s got a soft spot for Native Americans?

Team leaders for the Cobra rank and file, the Cobra officers always call the shots when none of the Cobra higher-ranked personnel are around.

While sharing some parts with the Cobra infantry, the officers come with new head sculpt, torso sculpt, legs, helmet and webgear.

Unlike the Cobra infantry, that came with a lot of sci-fi looking guns, this guy comes with more “real-world” looking weapons.

Dagger can be sheathed on his left thigh.

The Cobra officer also comes with a Luger-type sidearm, which can be holstered on his right hip.

The rifle comes with an optional mountable flashlight piece.

With the magazine and flashlight removed, the rifle can be stored on an optional huge holster on the officer’s back.

Lastly, the figure also comes with an SMG rifle.

Like the rifle, the SMG comes with a removable magazine. Note that the magazines are specific to each gun, you can’t mix and match them (shorter ammo magazine for the SMG).

I decided on only getting two of this guy, since I don’t see much sense in having the same number of grunts as officers.

Overall, an impressive set! This wave really ticked all the right boxes for me and the accessories are just incredibly done. I don’t know what will come with future waves, but I think it’s going to be hard to top this wave in terms of amount and detail of accessories.