One of the co-commanders of the elite Cobra troops, the Crimson Guards, Tomax and his brother Xamot were once mercenaries, until they realized it would be far more profitable to run a business enterprise to fund global terrorism. Taking up corporate law and then establishing Extensive Enterprises, the twins proceed to twist the law to serve Cobra’s evil purposes under a guise of a “respectable” corporation. 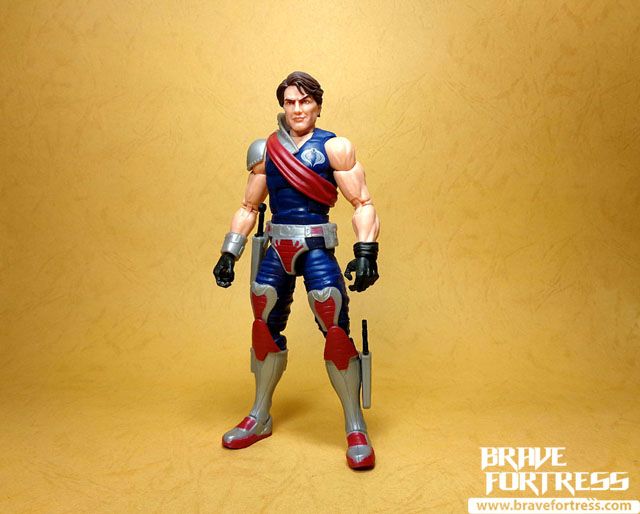 Tomax comes with twin daggers, each can be sheathed on his hip and leg.

He also comes with a sub-machine gun, the gun as a removable ammo mag and silencer.

The other half of the Crimson Guard twin commanding duo, Xamot is the mirror image of his brother, Tomax, only featuring a unique scar to tell them apart. The twins share an empathic connection known as the “Corsican Syndrome” in which twins are believed to be psychically bonded to one another. This allows the brothers to finish each other’s sentences know what the other twin is planning and feeling. The downside to this is that one feels the other’s pain when injured.

Xamot’s gear is positioned in the mirror image of his brother’s.

To distinguish one twin from another, the one with scar is Xamot. 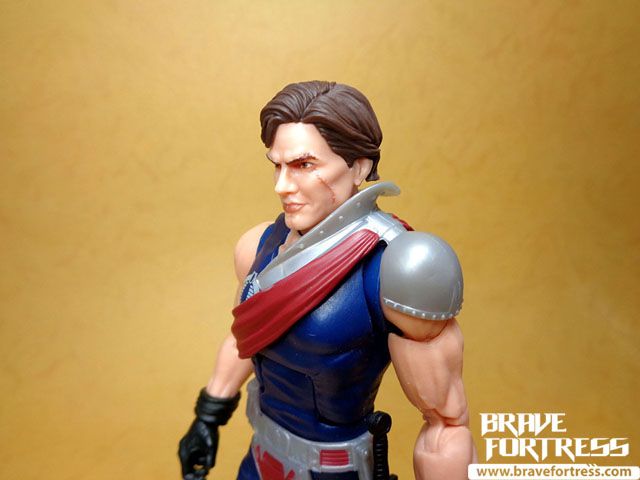 In the un-produced third season of G.i. Joe under Sunbow studios, the twins would have been the main villains of the series, what with Cobra (and Cobra-la) totally defeated after the events of the 1986 movie. The duo would then start a new organization called “The Coil” for the joes to fight. Too bad we never saw this happen and instead got the DIC Joe cartoons. 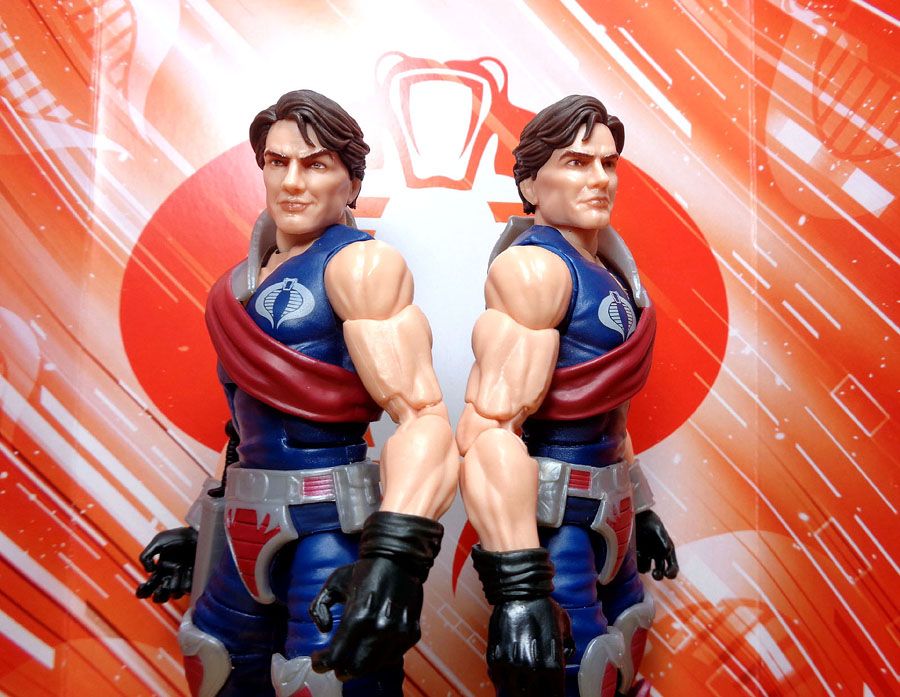 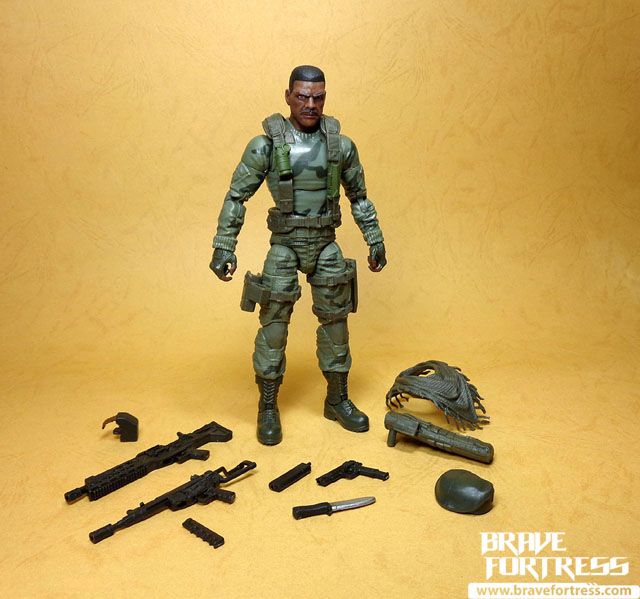 Lonzo R. Wilkinson is the G.i. Joe team’s original ranger. Codenamed Stalker, Lonzo’s primary specialty is infantry, followed by being an interpreter and field medic. He has a deep history with his fellow LRRP (Long-Range-Reconnaissance-Patrol) members Snake Eyes and Storm Shadow and this would come into play often in the Marvel Comics sagas. Prior to the arrival of Duke on the Joe team, Stalker often served as field commander for G.i. Joe on missions.

OK, seriously, what is up with the male Joes having scars?? First Duke, then Flint, now Stalker? Quit it, Hasbro!

For variety and novelty, the set includes a shemagh (pronounced “schmog”) for Stalker (we also get this for Snake Eyes in the newer, windowless two-pack with white Timber). It is also sometimes called a keffiyeh and ghutrah. Originating from the Middle East, these scarf-type wraps are meant to provide protection from direct sun exposure, as well to protect the mouth and eyes from blown dust and sand. 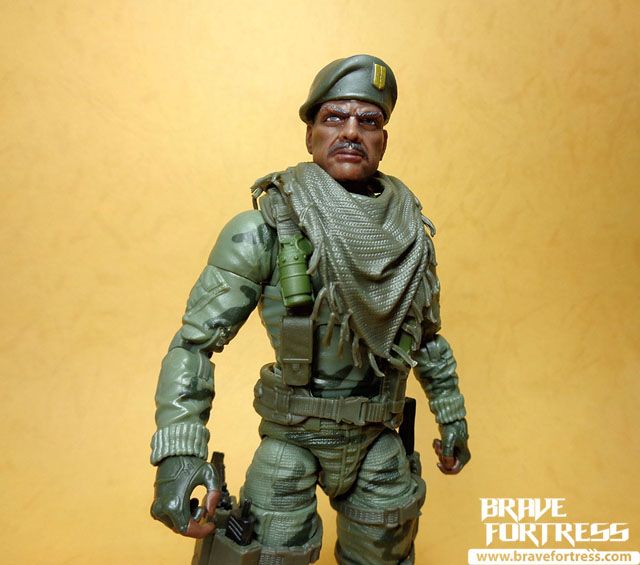 Stalker comes with a side arm and a knife. 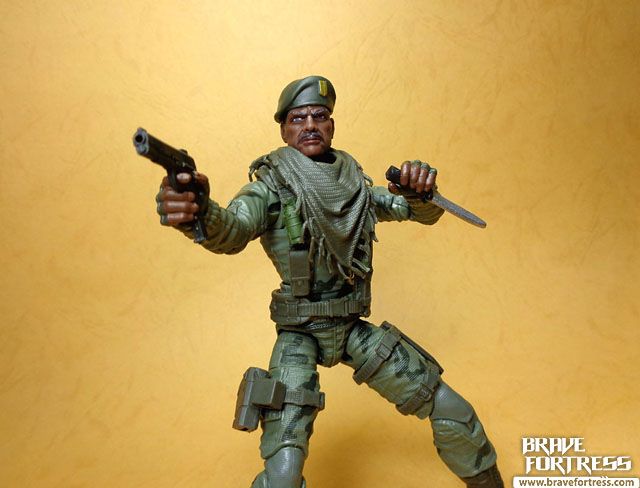 The sidearm actually has a suppressor included for it. So cool! 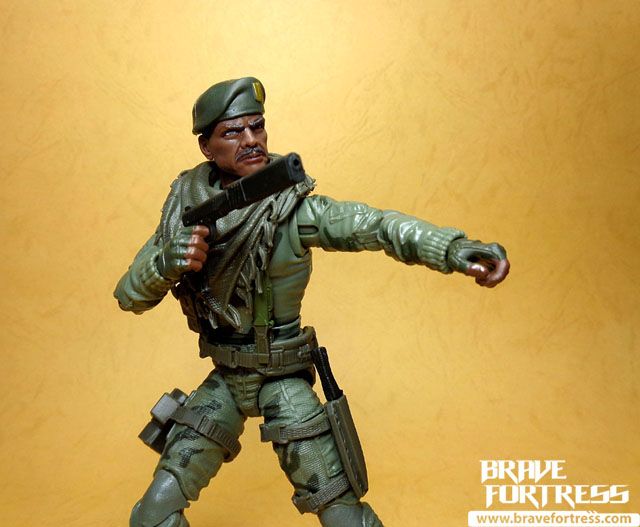 Both the gun and the suppressor can be holstered on the right leg.

The knife can be sheathed on the left leg.

For heavier firepower, Stalker comes with a rifle that’s very reminiscent of his classic 3.75” figure’s rifle. The MP40. 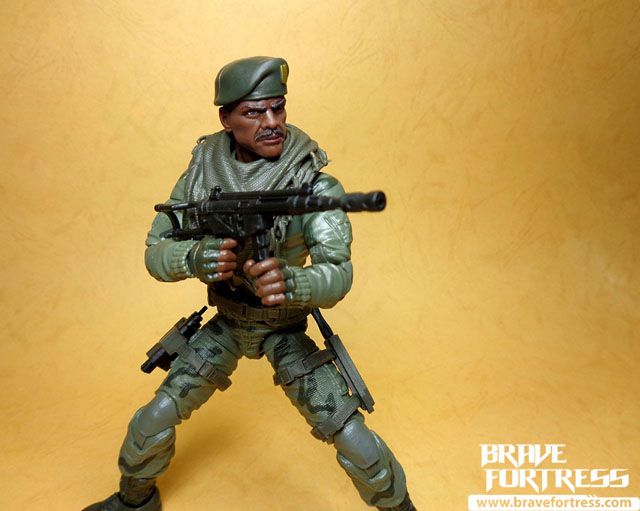 When not in use, the rifle can be stowed away in a big holster that can be pegged into the figure’s back. I love the fact that the ammo mag can also be stored into the holster. 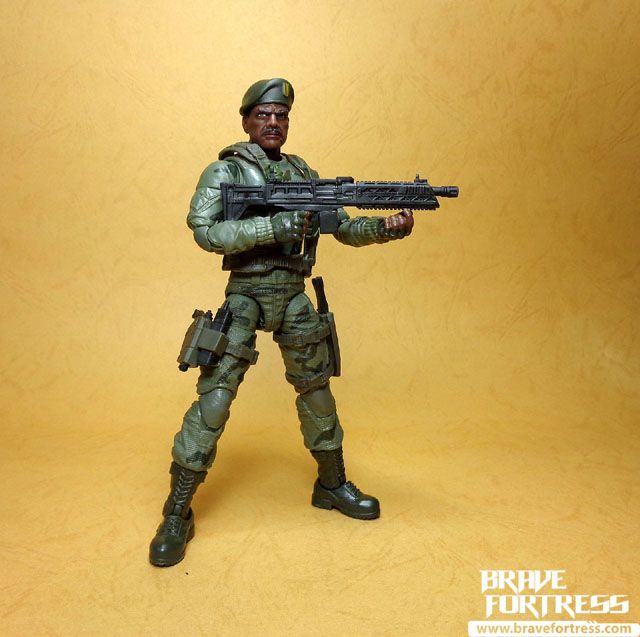 The LMG even features a removable ammo box. Cool!

While I really love the details they included with this figure! I can’t say I like the color choice. Too drabby? It makes Stalker hard to make out in a group shot with other Joes. I wonder if we’ll get a retro carded version that matches his classic colors down the line?

Funfact: The oddball codenames for this set from Hasbro are:
-Scorpio (Tomax)
-Gamma (Xamot)
-Zenith (Stalker)