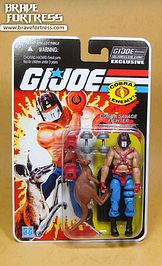 Kangor is based on a Brazilian repaint of Big Boa, as such I will probably pass on opening this guy, since Big Boa is only cool if he’s “unique”. Having two “supposed to be different” guys wearing the same outfit hanging around is just … strange to look at. Too bad though, I would love to add Gooru to Big Boa as a partner. Oh well..

Arctic Cobra Commander is a nice touch (looks way better than the old Pursuit of Cobra bloated vest look) but since it’s a concept figure not based on any appearance (I think), I will probably keep this guy carded. It’s a shame, had they released a Cobra Commander based on his arctic appearance in the 1987 animated movie, this would have gone great with Joe Club membership incentive figure Dr. Mindbender.

Yeah, overall, this set is the weakest one for me, would’ve loved to skip them if I could, or if only the Club used their slots for more deserving characters.