Singularity was first introduced in the pages of A-Force. She is a sentient quantum singularity in which a pocket dimension exists. Her powers include teleportation, flight, time travel, telepathic tracking and the ability to deploy an energy shield called the Enveloping Shroud to conceal, transport or protect herself and others.

Sigh… the knees on my Singularity are bent due to the way the figure was forced into the tray. I wish Hasbro addresses issues like this and made improvements.

She is quite small, which is good, since she’s supposed to be “young”.

Hasbro has come a long way in terms of sculpting female figures. But somehow this one misses the mark. It’s not bad but she seems kinda bored. There’s not much expression coming from this headsculpt of a “Hulk”.

Also, her elbows can only flex so far. I’m not a fan of the articulation they used for this buck.

Still, all things considered, she is one of the better versions of Jennifer Walters.

This new release of She-Hulk may not be much to look at but she is an improvement over the previous versions of She-Hulk (Fin Fang Foom wave version on the right, Blob wave She-Hulk on the left)_

The SDCC version on the right. Blob wave She-Hulk on the left.

After the events of Ragnarok, where Asgard was destroyed and everyone was killed, the Asgardians are reborn in new bodies, except for Sif and Loki. Sif’s soul was trapped in an elderly woman while Loki’s spirit was reborn in the body that was meant for Sif. Later on Thor manages to fix things and return Sif and Loki to their proper bodies.

It’s a shame he/she does not come with any effects parts.

Hasbro really did some excellent sculpt work with this figure. 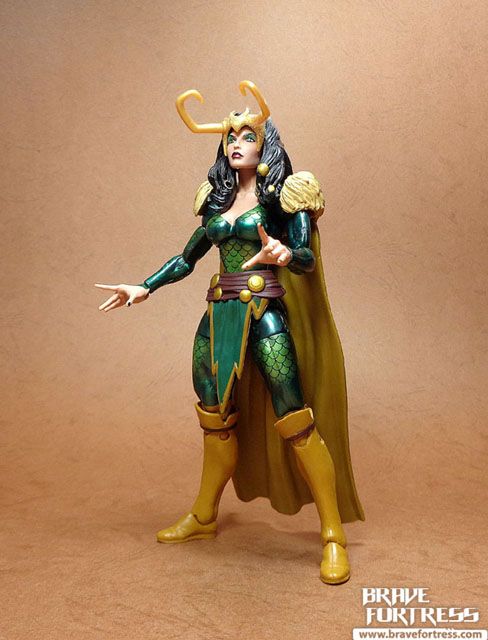 Meant to be Thor’s true love, Lady Sif has always been there for Thor. She is the sister of Heimdall, the sentinel of the Rainbow Bridge. She has the ability to teleport instantly to wherever she chooses.

Sif comes with her sword. Enchanted by Odin, it can slice through the fabric of dimensions and allow her to open portals so she and her companions can travel anywhere.

The sword can be sheathed in the belt loop.

Sadly, because of the way her hair is sculpted, it limits her head articulation. It’s better to remove the cape for wider range of motion. 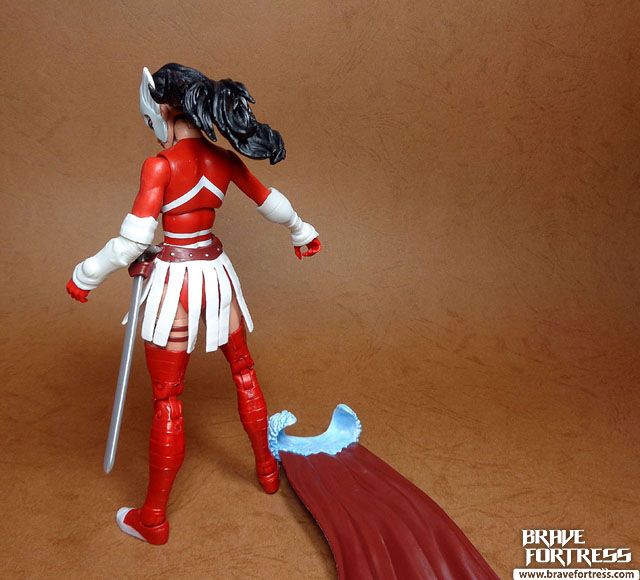 After being exposed to extra-dimensional energy, Monica took the name Captain Marvel, the second character to bear the name after the death of the original Captain Marvel, Mar-Vell from cancer. She later gave the name to Genis-Vell, son of Mar-Vell and went with the name Photon, and later on, Pulsar, before settling on the name Spectrum.

Her powers include the ability to generate, absorb and manipulate energy. This includes various forms of radiation. She can also cast holograms and travel at the speed of light in her energy form.

She is the Avenger team’s first African American heroine and later, even led the Avengers for a while as its team leader.

Elsa is a foul-mouthed monster hunter and expert marksman. She possesses various abilities inherited from her father including superhuman speed, endurance, strength and regenerating abilities.

She comes with a revolver that can be holstered.

Due to her training, she is very proficient in firearms, for taking out monsters.

This figure is easily my favorite in the set, due to her having the most accessories and I am kinda partial to red heads.

Heh, when one shotgun isn’t enough, they gave her two shotguns!

Elsa also wears a choker on her neck which holds the Bloodgem, a family heirloom which actually amplifies her inherited powers.

Following the events of Marvel’s Secret Wars, the world was remade and She-Hulk is the baroness of the domain of Arcadia and leads the all female hero team. A-Force.

Oddly, this set does not feature the main team (Earth-616) for the A-Force. The team is actually made up of Captain Marvel (Carol Danvers), She-Hulk, Singularity, Medusa, Dazzler (Alison Blaire), Nico Minoru and another Alison Blaire from Earth-15513. Elsa Bloodstone is never actually seen as a member of the A-Force team. I guess they decided to include her since it was the only way to get her into the Legends line?

Originally debuting at the SDCC, this was later also released as a Toys R Us exclusive set.