After Tony Stark decides to go back to basics and swears off advanced technology, he creates the Model 70 armor based off his vintage unit’s designs. Housing only the most basic of Iron Man’s combat technology, the suit’s offensive and defensive capabilities only include the standard Repulsors, a chest Unibeam and micro missiles.

The suit is the second retro-styled Iron Man suit to be designed by the legendary comic book artist, Alex Ross.

It certainly features a lot more “glowing” parts, doesn’t it?

Surprisingly, Hasbro didn’t include a Tony Stark head to go with this figure.

It still comes with the usual “Repulsor” effects parts.

Due to the design of the figure’ shoulder pads, his shoulders have some limits to their range of articulation.

Iron Man also comes with smoke effects parts. I’m not sure why they need to be wrapped around his arms, it’s not as if Repulsors generate the kind of heat that causes smoke?

I prefer equipping the effects parts around his boots to simulate heat from his boot jets (third party display stand used in the photo).

After Thor is crowned the new King of Asgard by his father Odin, he also receives a new uniform. Galactus then arrives and makes Thor his new Herald, tasked with finding five particular worlds in order to help Galactus fight off the Black Winter. By the end of the saga, Thor becomes angered for being a pawn used by Galactus, eventually killing the cosmic entity by draining the latter of its life energies.

Thor’s new uniform features a glowing white sash in the shape of the Thurisaz rune.

This version of Thor comes with his ravens, Munun and Hugin.

You can tuck this particular raven’s claw under Thor’s hair to hold him in place on Thor’s shoulder.

The other raven can be placed on Thor’s left palm.

Of course, no Thor figure is complete without his enchanted hammer, Mjolnir.

Mjolnir can be placed into the belt loop on Thor’s right side. It does look a bit odd to see, though.

Hasbro included lightning effects parts in this set for the hammer.

You can also place the lighting effects parts on Thor’s left arm as well.

Adam Bernard Brashear is a former marine and physicist. After being exposed to anti-matter radiation, Brashear became a stable anti-matter reactor. Adam gains a wide array of abilities, including flight, invulnerability, super strength, energy generation and even molecular manipulation and transmutation.

Blue Marvel’s full level of invulnerability has yet to be fully determined, but he has been shown to withstand a nuclear explosion with no damage.

Aside from his already incredible array of superhuman abilities, Blue Marvel also has enhanced mental perception, being able to understand complex formulas faster than average humans, greatly aiding him in his work as an established physicist.

Blue Marvel’s special gauntlets aren’t just for show, they actually help him channel his energy powers safely (being an anti-matter reactor and all).

Ophelia Sarkissian is the criminal mastermind known as Madame Hydra. Rising through the ranks of Hydra, she became the terrorist organization’s leader. While having no super powers, she manages her criminal empire through sheer cunning and ruthlessness. She can also exert political influence through her vast, illegally-accumulated wealth. As a master tactician with training in various weapons and highly skilled in hand-to-hand combat techniques, Viper/ Madame Hydra is dangerous to all who come across her.

Aside from being an expert sniper and marksman, Madame Hydra also likes to use poison darts and blades incorporated into her snake-motif weapons to take down her target.

She has the Hydra logo on her pistol holsters.

Unfortunately, for weapons Madame Hydra only comes with a dual pair of Luger pistols. No high power firearms or bladed weapons in this set. 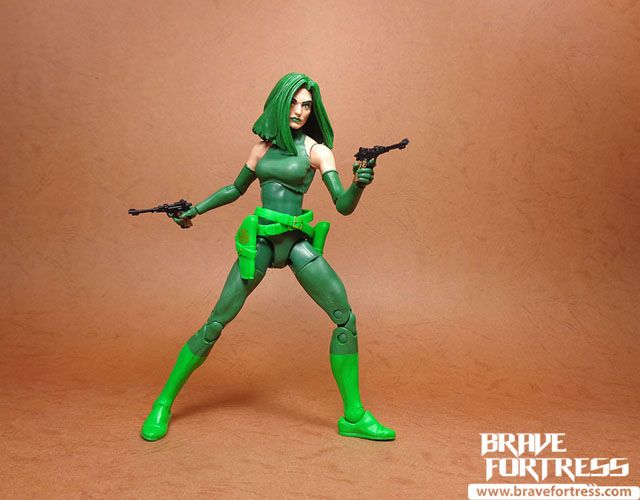 Robert “Robbie” Baldwin gains his “bouncing” powers after being exposed to an other-dimensional energy source while working part time at Hammond Research Laboratory. His new powers lets his body generate a kinetic energy field that protects him from harm, as well as turn Robbie into a dynamo of kinetic energy. Naming himself Speedball, the youngster becomes a self-styled crime fighter and eventually goes on to join the superhero group, the New Warriors.

It’s really neat that we can see his eyes through his goggles as well.

As a part of his power set, when Speedball’s kinetic field is activated, his body also gains height and mass. Thanks to his kinetic field, punches even projectiles would bounce off of him.

In the comics, while his kinetic field is activated, it visually manifests around Robbie as visible bubbles suspended in mid-air. I guess it’s difficult to make this show up on an action figure, unless Hasbro include a backdrop of some sort.

With the release of Speedball, we’ve almost got a complete lineup featuring the original New Warriors members.

Night Thrasher (From the Kingpin wave)

…Darkhawk (from the Guardians of the Galaxy Vol. 2 Titus Wave)….

I really hope Hasbro makes the other New Warriors like Marvel Boy and Namorita to complete the more iconic members of the team.

Daisy Johnson is an agent of S.H.I.E.L.D. and the daughter of the supervillain known as Mister Hyde who had a relationship with her Inhuman mother. Daisy has the ability to generate vibrations, whether they be massive earthquakes, or pinpoint tremor attacks in a target’s brain or heart. Thanks to her extensive training under Nick Fury, Quake is also a skilled marksman and an excellent hand-to-hand combat specialist. 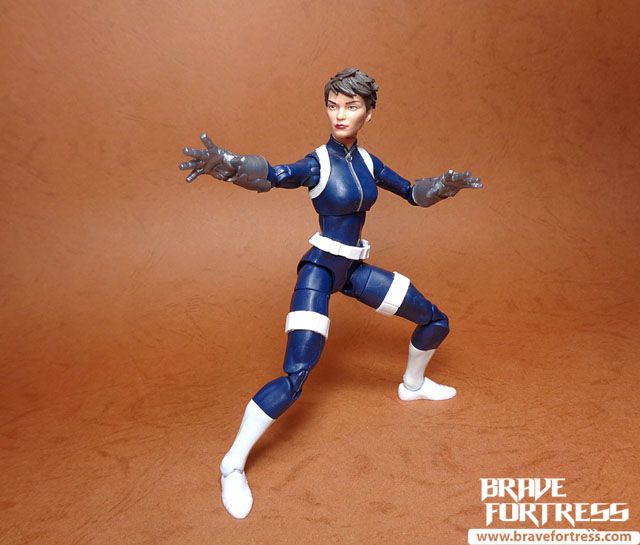 Too bad the set doesn’t come with any optional closed fists for her. Now she’s stuck with her hands always in the same pose.

Maria Hill – As a bonus for this set, you can opt to get several Quakes to “army build” female S.H.I.E.L.D. agents. The set comes with a Maria Hill head and hands to get the ball rolling.

Maria Hill is the deputy director for S.H.I.E.L.D. and reports directly to Nick Fury. A natural born leader, as well as a master tactician and strategist, Commander Hill is also highly skilled in various forms of physical combat and a proficient marksman of several firearms.

Sadly, for this set, Hill only comes with her sidearm.

Hmm.. to get more of this figure or not… decisions, decisions..

Originally debuting as the corporate-sponsored hero, the “Super-Patriot”, John Walker is eventually brought in to replace Steve Rogers as Captain America, when the latter abandons the mantle.

Walker’s “modern version” shield lacks the star in the center.

Same as usual for the Captain America-themed figures, you can peg the shield into the figure’s back.

While Walker does not have the original, true Super Soldier serum coursing through his veins, his body has been altered through mutagenic experiments by the mad scientist Dr. Karl Malus. This then grants Walker superhuman strength, speed, agility and reflexes.

Aside from his already rigorous training as a military combat veteran, John Walker also then received further extensive training from Taskmaster to replicate Captain America’s moves and combat skills.

Basil Sandhurst is a brilliant electro-mechanical/ chemical research scientist. Equipped with an armored exoskeleton grafted onto his body, the Controller gains increased strength, endurance, the ability to fly. His armor can also be outfitted with more technological enhancements that Basil may require in battle (similar to how Iron Man upgrades his armors). Employing the use of “slave discs”, the Controller can drain the mental energies of his victims to power his exoskeleton, as well as control their thoughts and actions.

Debuting as early as 1969 in the comics, The Controller can be considered as one of Iron Man’s oldest enemies.

Originally, the Controller was the same size as Iron Man when they first fought, through the years, his size has been dramatically “upgraded” in the comics to make him seem more threatening to the armored Avenger.

He comes with his slave discs sculpted into his right hand. The discs cannot be removed though.

Heh, for some reason, this guy really reminds me of DC Comic’s Darkseid.

You know, it just dawned on me, after all these years and waves from Hasbro, we never got a wave of these guys together in one go (I’m not counting the MCU and 80th Anniversary waves). I think this is the closest we’ve ever really gotten to having the Marvel “Big 3” together in a single wave with a Build-a-Figure.