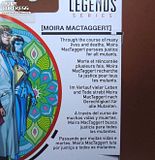 Undoubtedly the most popular X-man around, Wolverine and the X-men still fight to protect humans and mutants alike, this time from their new base of operations, the sovereign mutant island nation of Krakoa.

The body is a reuse of the buck from X-Force Wolverine.

I’m not particularly impressed with this redesign of everyone’s favorite Canuck, it just doesn’t seem quite iconic as compared to the older costumes.

There’s also something about Logan’s grin here that seems creepy as opposed to cool.

For options, the figure comes with an alternate “bearded” look, this is the more accurate look he’s got going in the House of X saga. Wonder why his beard is gray though. Is he dying his hair?

After Fantomex gives up his body for Professor X’s mind to inhabit, Charles Xavier can now walk again and changes his name to just X. As X, he gives up his dream of co-existing with Homo Sapiens and proceeds to create the independent mutant nation of Krakoa, where all mutants (hero and villain) can live together free of persecution.

To make sure you got his name right, he’s wearing a Cerebro helmet with a big X in the center. The helmet isn’t removable though.

The set comes with an alternate unmasked head that features psychic effects. The head also fits on the previously released Professor X figure that came with the Hover chair. So that’s a nice bonus.

I really like this effect more. It sure beats the silly “creamed” look of the “telepathic head” from the Deluxe Hoverchair version. I think the effect is sculpted in? So you can’t remove it.

Karima Shapandar was once an Indian police officer before being transformed by the villain Bastion into a “Prime Sentinel”, humans that have been modified into Sentinels to hunt down mutants. After Charles Xavier and Magneto managed to remove her Sentinel programming, Rogue later on asks her to join the X-men.

Omega Sentinel is outfitted with nanite technology, which greatly enhances all her attributes to superhuman levels. She also has flight and regenerative abilities. The electrostatic poles in her forearms allow her to morph them into weapons that can discharge large amounts of electricity and form microwave emitters. She can also execute limited control over nearby machines. 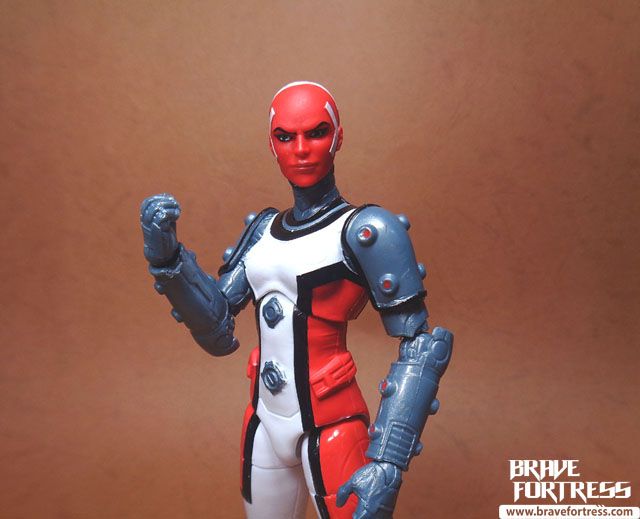 She comes with alternate “blaster arms”. 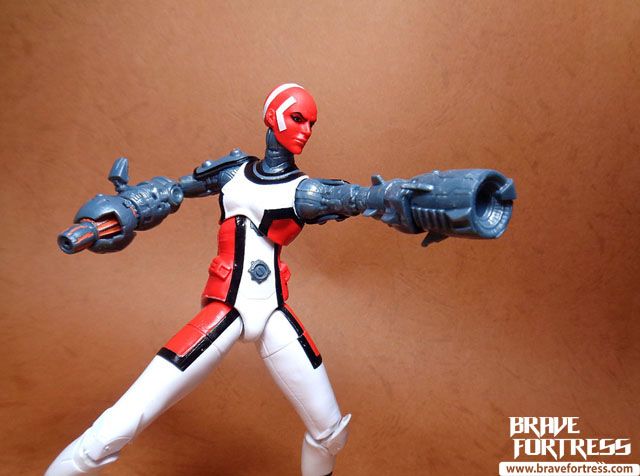 Lastly, she comes with an alternate head. Loosely based on when she was possessed by the digital entity known as Malice (a villain). 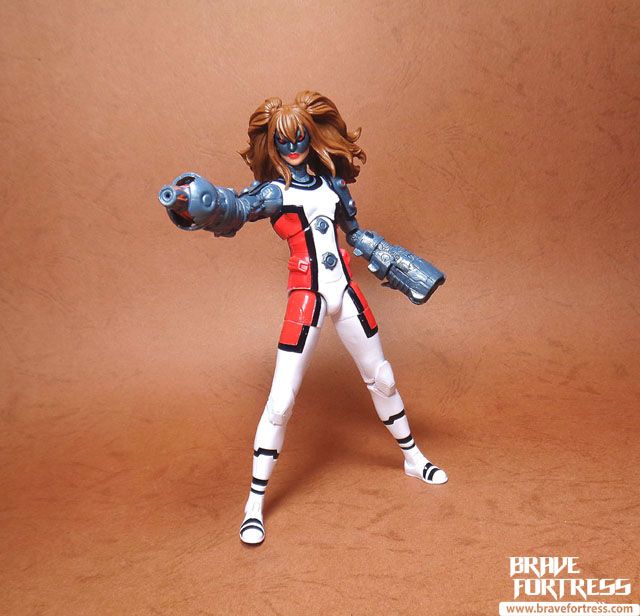 In the House of X storyline, it seems her Sentinel programming has resurfaced and she is now working with the Sentinel, Nimrod.

Jean Grey is one of the strongest telepaths on the planet, capable of moving even large objects with her mind, as well as reading and controlling the thoughts of others. Her psychic powers surpass even that of Professor X.

This costume is based on her look in the House of X saga, which is loosely based on her original “2nd uniform” as Marvel Girl from the early days of the X-men comics. I guess retro is “in”.

Hmm I can’t say this is Hasbro’s best work in the tooling the department, her facial expression just looks so… mopey? There are days I think Hasbro has a team of “lesser” sculptors running around doing mediocre sculpt work when the main sculpting team is super busy and it shows right here. 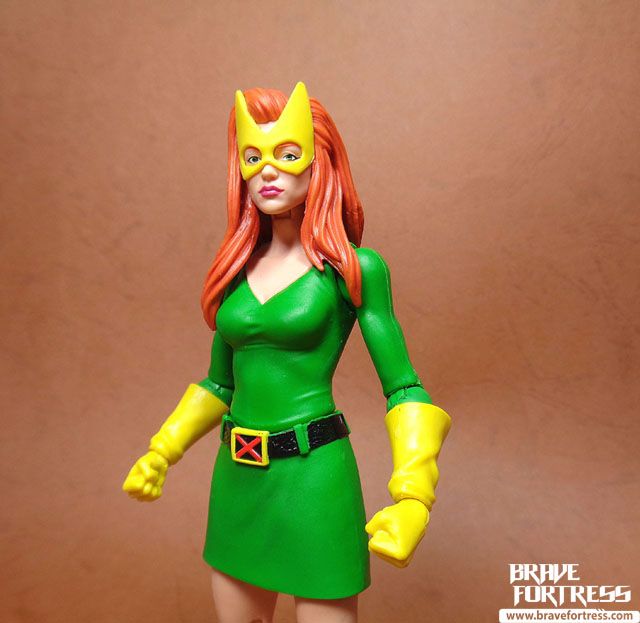 For some reason, her skirt was casted in “not-so-flexible” plastic, so you can’t really do anything with her from the waist down. Bad QC here, Hasbro.

Lastly, she comes with the rare plant (plot device) featured in Hickman’s X-men run called the Krakoan Flower, it can heal all human ailments and only blooms on the small island nation of Krakoa. It is used by the mutant nation as a bargaining chip with leaders of the world as leverage to not invade their country. 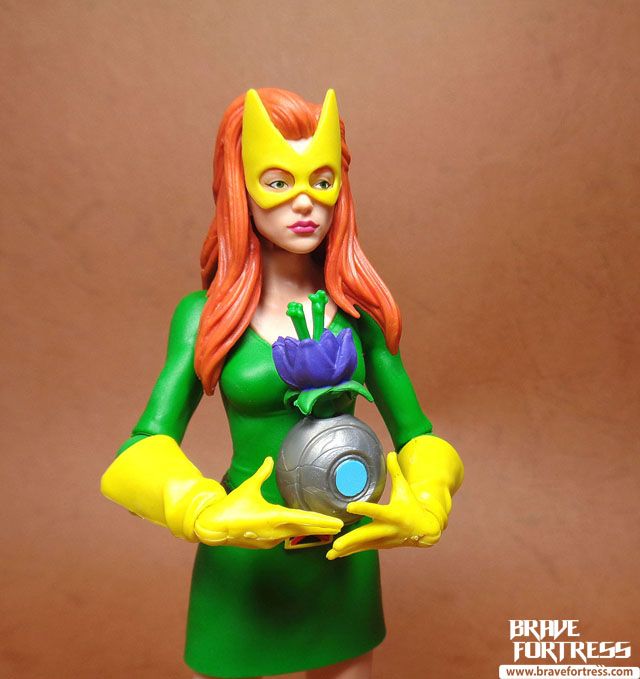 Originally just a supporting human character who was romantically linked to Professor X in the X-men comics, Moira was more recently revealed to be actually a mutant with reality warping resurrection powers, being reborn every time she dies with her memories from her past lives fully intact, she tries to change the course of mutant history with the knowledge she gains with every lifespan. She is currently on life 10 of her cycle, possibly being her last one as she may only have 10 or 11 lives to live at most. 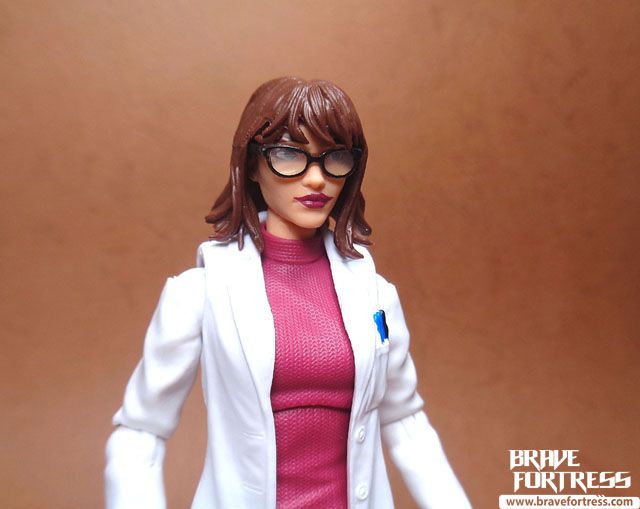 She comes with a book (on genetics?) for an accessory for her research.

You can take her apart like a mannequin and reassemble her for her House of X look.

I really wish the cap was removable. I was hoping to make a Lois Lane figure out of her, but I guess that’s not going to work now. 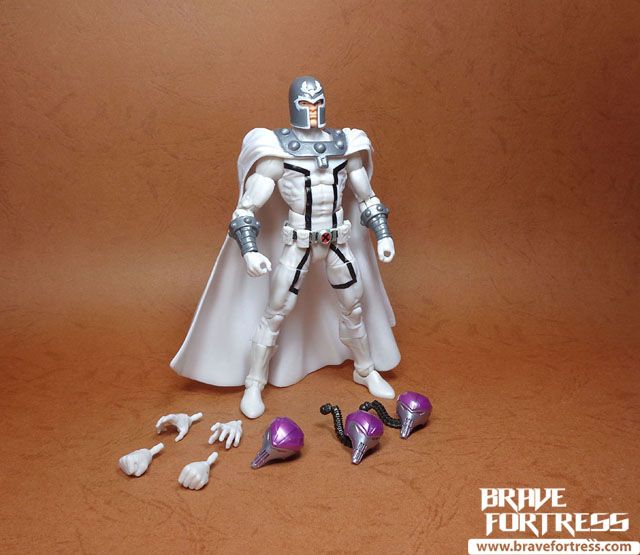 Erik Lehnsherr was once the villainous Master of Magnetism known as Magneto. Often being the arch enemy of X-men. Magneto eventually changed his ways and now works with them to bring peace and stability on the newly established mutant haven of Krakoa.

His helmet is sculpted permanently in place. 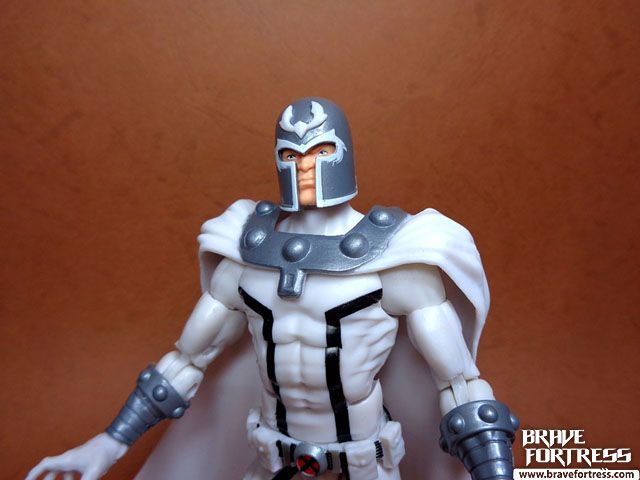 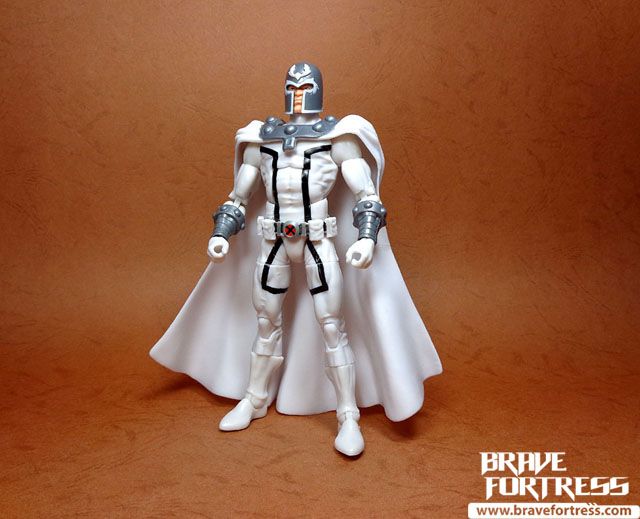 Too bad he doesn’t come with effects parts this time around. Hasbro keeps cost cutting I see.

Not sure how I feel about a heroic Magneto. It’s no fun if all the cool guys are on the same team now. Lol..

As field commander for the X-men when they’re on missions, Scott Summers has proven himself time and again in his role as team leader. Occasionally at odds with Wolverine (for more reasons than one), the two X-men still greatly respect one another despite their differences.

Cyclops does come with an “optic blast” alternate head.

He also comes with an optic blast effects part. 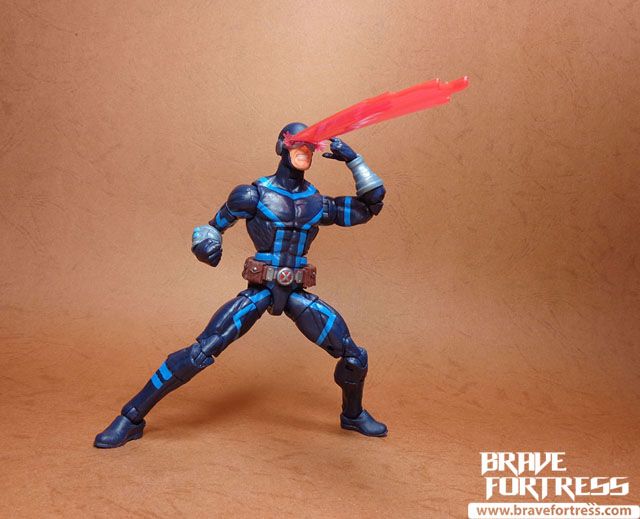 Not much can be said about this version of a Sentinel. It just appeared in a few panels in the comic books (not even multiple pages) and was subsequently destroyed and never heard from again. It’s actually surprising Hasbro even invested in tooling for making this thing as a Build-A-Figure. Not a particularly impressive choice. 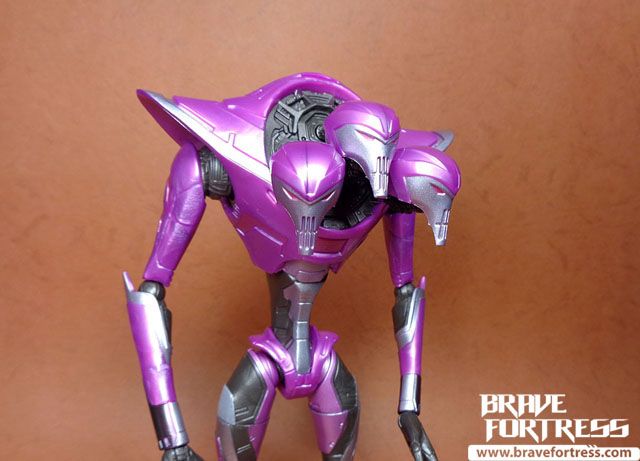 Due to the bigger upper body and thin legs, expect to have some difficulty balancing this guy.

Plugging in the heads is the worst ML experience ever!! The holes are just too small. I actually chipped off my thumbnail trying to push it down (never happened to me before). I eventually gave up, got a bowl of hot water and dunked in the torso (holes facing down), left it for 5 minutes and tried again with eventual success (but was still a bit hard to do). Seriously Hasbro, what the what??

The figure is surprisingly quite tall, standing at roughly 8 inches tall. 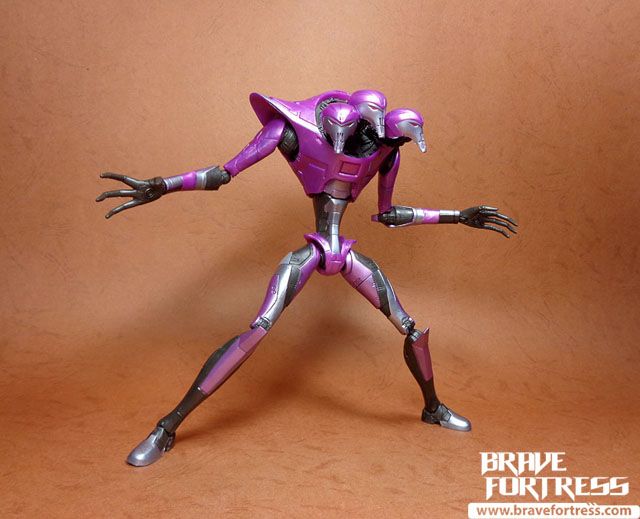 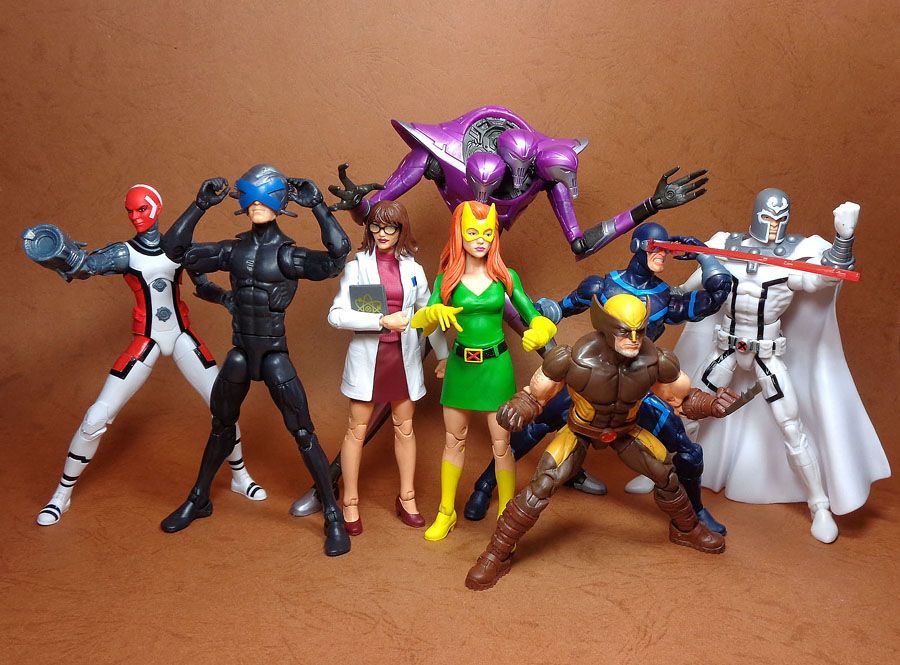 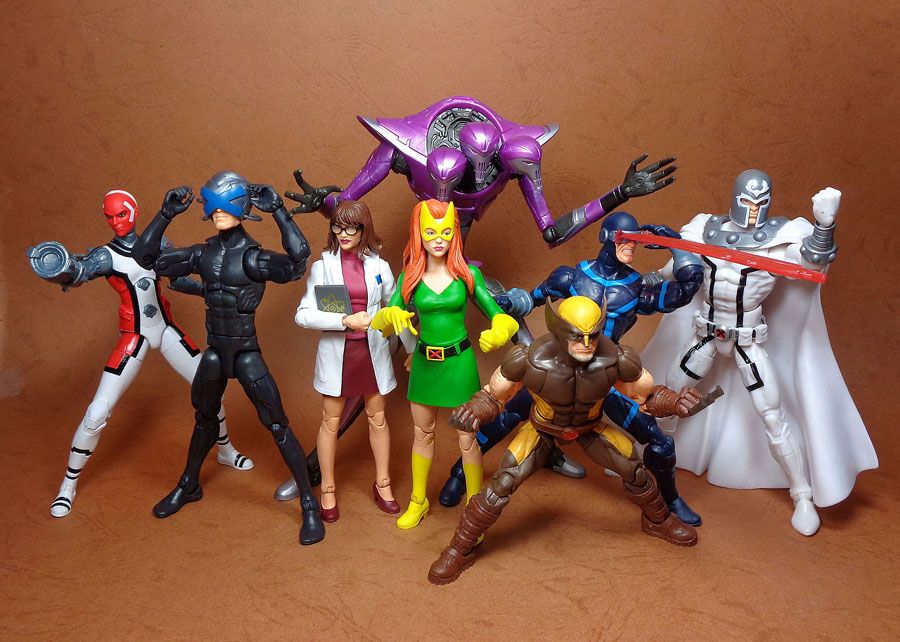 I earlier posted a gallery featuring a partial portion of this wave (just the 3 female figures), as I had originally planned on skipping most of this wave since I’m not a fan of the House of X saga and the guys in this wave were already done ad nauseum for the ML line, but when this line went on deep clearance locally, I eventually caved and picked up the missing figures so I could complete the Tri-Sentinel/ Theta Sentinel. Lol… I know, my willpower is weak against deep clearances.

I’m glad I waited for clearance for this wave, easily one of the weaker waves in the entire ML line, hardly worth the price of paying full SRP for.