Greer Grant Nelson’s transformation into the superhero Tigra involves science and sorcery, granting a person the attributes of the champion of an ancient Cat People. As Tigra, she gains more feline characteristics as well as increased strength, agility and powerful retractable claws. 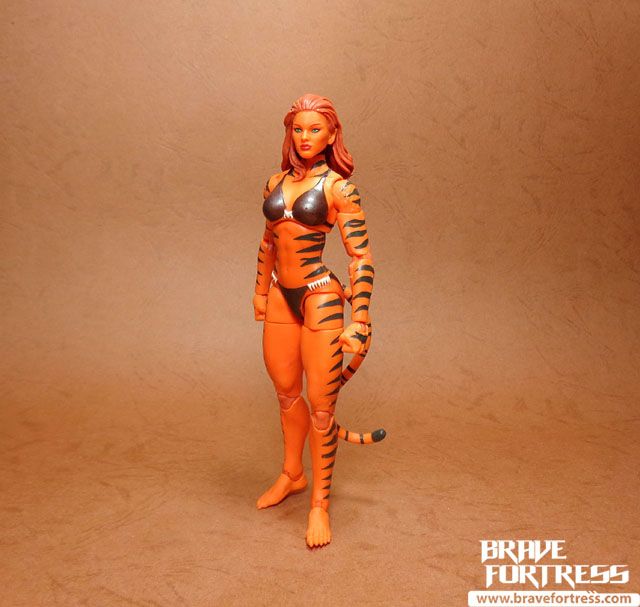 Tigra actually possesses a mystical talisman that allows her to transform back into human form at will, but she prefers to be in her feline form, stating it to be her “natural” body.

While her tail has no real articulation, the base of her tail can be rotated.

She comes with an alternate “wild look” head.

While rarely mentioned, Tigra actually has a son, born from her relationship with a Skrull pretending to be Hank Pym. The boy does not possess any Skrull DNA as the Skrull copied Pym down to the DNA level.

The body makes use of Hasbro’s new “pinless” design for the joints, where the pins are no longer visible on the sides of the figure. The elbows are also double jointed now for female figures as well. Cool!

She comes with some sculpting on her shoulder and forearms to create a “shaggy fur” look. Not bad, but not really necessary? For it to look right, the tooling should be applied all over and not just in a few locations.

Overall, a huge improvement over the original Tigra released by Hasbro during the early days of the Marvel Legends line. I just wish it had a muted tone of orange. The orange plastic used is ridiculously bright.