Anna Marie (last name prior to her marriage to Gambit unknown) is one of the more popular X-men around. A southern belle that was originally introduced as a villain, she became one of the mainstays of the X-men team.

The figure is based on Rogue’s costume appearance in the X-men: Regenesis comics event. It was originally supposed to be released back in 2013 in the Wolverine Puck Build-a-Figure wave as a variant for Emma Frost but was cancelled. This final release version has been retooled into a chest showing less cleavage (the original one had a much more exposed chest). The head has also been retooled into a smiling face from the original “annoyed” look.

Rogue has the ability to temporarily absorb the powers and abilities of anyone she touches. Although this sometimes becomes a double-edge sword, as she also absorbs the memories and trauma of her targets as well.

Apart from her absorbing powers, she also has the permanent ability of flight and enhanced strength following an encounter with Captain Marvel (Carol Danvers).

I’ve seen some collectors repaint her hair and use the head as an alternate head for G.i. Joe Classified Scarlett. It looks really good.

A member of Magneto’s Brotherhood of Evil Mutants, St. John Allerdyce has the ability to psionically control flame, shaping it into any form he wants through concentration.

Though he can control flame, he cannot generate it. Thus he needs to wear a flamethrower backpack and nozzles into combat.

Pyro also has a limit as to how far he can control his flame constructs, about 100 yards. He also needs to be able to see his creations to maintain them, anything that distracts his attention will cause the constructs to become regular flame again until it burns out.

The set comes with flame effects parts for the figure. 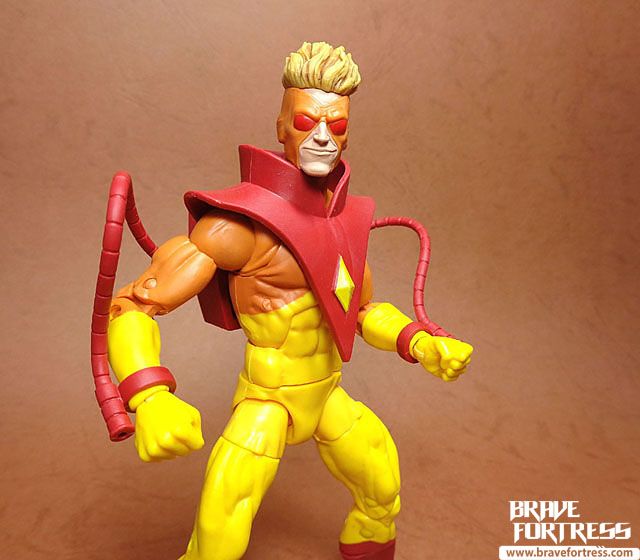