First appearing in Web of Spider-man #100 back in 1993, Spidey creates a new bullet-proof suit of armor to take on the New Enforcers.

Unfortunately, one of the suit’s drawbacks is that it slows him down due to its bulkiness.

Spider-man still retains the use of his classic web-shooters while in this get up.

The set comes with some web effects parts.

The webs aren’t sticky or anything, but you can use figures to hold them in place themselves to make it seem like they got webbed.

I used a third party display base to add some dynamic poses. 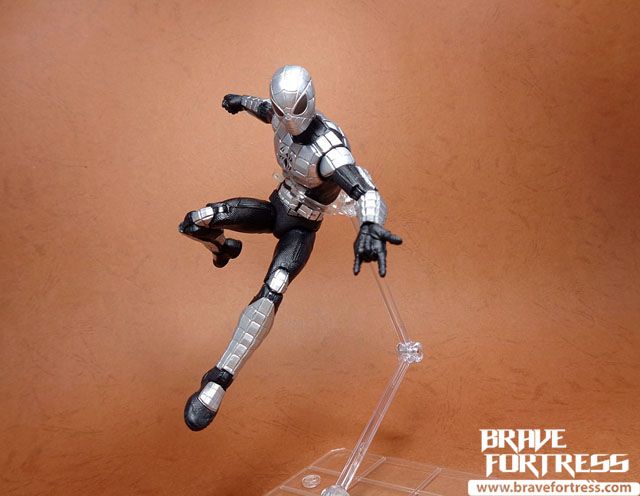 In the same issue that it debuted, the suit was eventually destroyed when Thermite hit it with a cold blast, causing the suit to become brittle and shatter. Spidey would eventually go on to make more specialized variations of Spider-armor later on in the comics.

Lol… for some reason, I just can’t shake the Kamen Rider vibes from this figure.

Originally a small-time hitman for the Maggia mob, Russian immigrant Joseph (last name unknown) rises through the ranks and becomes an enforcer (and occassional boss) for the mob. After being given a life-saving skull replacement surgery by the criminal surgeon, Jonas Harrow, Hammerhead gains a near-indestructible Vibranium-reinforced skull.

Inspired by the Al Capone era of mobster style, Hammerhead fashions his crew in similar outfits of the bygone time.

Hammerhead comes with a knuckle duster sculpted on his left hand.

This version is a huge improvement over the original version, which felt scrawny as it was using the Chameleon as the base body.

Hammerhead from the old Rhino wave, like I said, a HUGE improvement.

The head sculpt work here is really impressive. A far cry from the lousy Retro-carded Sandman figure (I really hate that figure, I just can’t pull the trigger on buying it due to how bland it is).

Hammerhead may be an ordinary human without any powers, but he keeps himself in Olympian-level physical shape. His favorite tactic when he attacks is to charge in like a bull using his Vibranium-reinforced forehead as a battering ram to slam into his opponents.

For weapons, he only comes with a bat. Sigh.. I wish they reused the Tommy gun accessory that came with the original Hammerhead/ Chameleon figure instead.

As this is already the umpteenth Black-suited Spidey figure I have in the ML line, I just couldn’t bring myself to open another one. I still pick the one from the Kraven’s Last Hunt two-pack as my “go to” Black-suited Spider-man.

Roderick Kingsley is an eccentric billionaire who modifies Norman Osborn’s Goblin formula to give himself enhanced speed and strength. He also steals Osborn’s weapons arsenal and makes them his own.

The figure is a retool of the Hobgoblin from the Venom Space Knight wave, featuring a different set of arms and legs.

It’s too bad this figure doesn’t come with alternate hands, such as the “finger pointing” blaster hands.

I really don’t get why they dropped the chain mail for the arms and legs, I think they look great on the previous version. Maybe going for cartoon accuracy?

The head is a straight up reuse of the previous version but with brighter colors.

Hobgoblin still comes with his bag of tricks.

Likewise, the Goblin Glider is the same as the previous, but recast in purple this time, as opposed to the silver version of the original.

Yep, still lacking any pegs for posting up on flight stands… sigh..

Of course, any Goblin would always come with pumpkin bombs.

It’s close, but I think I prefer this one over the previous version, as the colors look brighter and this one fits in better with the overall colorful aesthetic of Spidey’s rogues’ gallery. I just wish it came with the original version’s chain mail arms and legs since the tooling on those looked great.

The previous Hobgoblin from the Space Knight Venom wave. Colors look dull by comparison now, no?

I also decided to keep this figure carded for now as well, as I still prefer the previous version from the Absorbing Man wave as that came with Carnage add-on parts (plus I love the “comics artist Mark Bagley” inspired big eyes on that one).

Herman Schultz is an inventor and engineer. He created his own vibro-shock gauntlets, weapons that can project highly concentrated air blasts that are powerful enough to blast through concrete walls.

To protect himself from the force of his own “vibro-shock” gear, Schultz develops his costume made from thick quilt patches to absorb the dangerous feedback of his equipment.

The set also comes with spare forearms so that Shocker doesn’t look like he’s always holding the triggers down all the time.

Hasbro included effects parts for Shocker. However, I do wish they made new effects parts already, these are getting really, really old.

Unlike most of Spider-man’s rogues’, Shocker is only in the supervillain game purely for the money and isn’t out seeking maniacal revenge on the wall-crawler. He prefers to maintain the reputation of a professional criminal as opposed to the usual insane, mass murder-happy supervillains Spidey has to deal with on a regular basis.