Another X-Force Wolverine, sigh… this marks the third release in the Hasbro Marvel Legends line. In fairness though, it is better than the previous versions. A definite improvement over the Hit-Monkey wave X-Force Wolverine.

I forgot to try, but I think his claws are removable.

Samuel Zachary Guthrie is a founding member of the New Mutants, later on graduating to the X-men and X-Force teams. His mutant powers allow him to generate and release thermo-chemical energy and use it to either propel him through the air, or generate a “blast field” to protect himself from injury. His field is so strong it was once able to repel the force of Gladiator’s punches.

Now, according to Hasbro, they couldn’t “justify” tooling for making legs for this figure, so it just comes with his lower half like this. I don’t believe that. But it is what it is I guess.

I find real irony in the fact that while this figure has no legs, it comes with a leg for Wendigo.

Tabitha Smith can mentally create explosive orbs of energy, from concussive to explosive force. She can also control the timing of her “explosives” and even muffle the sound of the explosions to keep them concealed.

Coming from a criminal background, Boom Boom has since reformed and joined various X-teams such as the New Mutants, X-Force and the X-men. She also goes by other various code names such as Time Bomb, Boomer, Meltdown and Firecracker.

James Hudson is the founder and leader of Alpha Flight, Canada’s very own Superhero team in the Marvel Universe.

Sigh… I hate it when this happens, non-matching shade of colors for plastic parts. tsk..

Also known as Weapon Alpha or Vindicator, his powers come from his uniform. His suit is actually a skin-tight battle armor designed by himself which can provide him the powers of flight, fire energy blasts and even generate force fields.

It’s a shame no energy effects parts were included for this figure.

Anyone else getting a “Batman” vibe from this head sculpt? 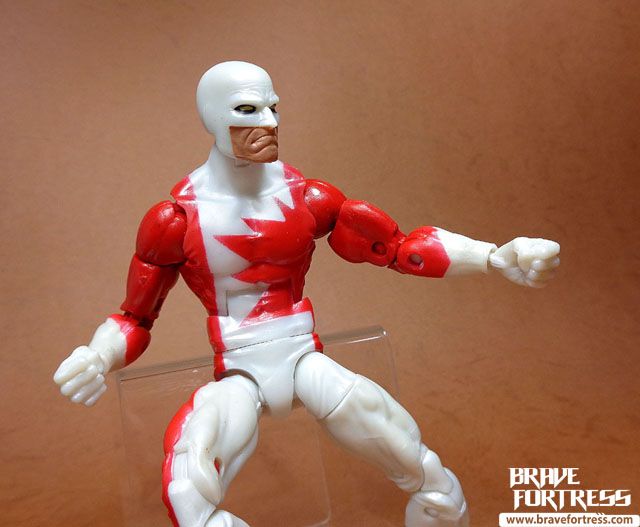 Kurt Wagner is one of the few mutants with the ability to teleport himself and an amount of mass to various distances. His teleport powers allow him to travel to a maximum distance of two miles. The farther he teleports, the greater the strain on his body.

Whenever he teleports, he generates the onomatopoeic sound “bamf”.

Aside from his ability to teleport, Nightcrawler also can cling to surfaces thanks to microscopic suction cups on his hands and feet.

Kurt is also a master fencer, thanks to his love for swashbuckling fiction.

Lastly, Kurt is capable of extreme gymnastic feats thanks to his body’s unique bone structure. Plus he has a prehensile tail, which can be used to grab items and even lift grown men.

Nathaniel Essex hails from Victorian Era London, more than a 100 years old, Sinister was originally a normal human obsessed with evolution and mutants. Through various experiments, he has finally made himself a mutant as well.

Interesting design choice on the cape.

A master planner and manipulator possessing genius intellect, Mister Sinister always has several plans in motion to achieve higher evolution and his obsession with perfection knows no bounds.

As a telepath, Sinister can control others, he also has the ability fire energy projectiles through telekinesis.

Through genetic experimentation of his own body, he is able control every cell in his body and can shape shift and even regenerate from massive injuries at will.

Originally created to be an opponent for the Incredible Hulk, the Wendigo has more often than not tangled with the X-men as well.

Supposedly originating from a mystical curse, anyone can become a Wendigo if they consume human flesh within the Canadian wilderness. Originally, there was only one Wendigo at a time, the curse leaves and passes onto another host when another person commits cannibalism. This has since been changed in the comics I think.

Wendigos are incredibly strong, able to match the Hulk in brute strength. They are mindless beasts and can only yell their name as they attack.

Wendigos also possess incredible healing abilities, able to recover from being disemboweled and even having its heart ripped out.

The figure is a heavy retool of Build a Figure Sasquatch. Pretty tall next to an average height Marvel Legends figure.