Based on the Dark Knight’s appearance in the DC Black Label limited series “Batman: White Knight” by Sean Murphy. His costume is slightly different from his usual look (new collar, thigh-high boots). The story is set in an alternate universe and not in the main DC timeline, where Joker finally outmaneuvers Batman by going sane and uses his genius to manipulate the legal system.

Figure comes with “rope” that you can hook onto his belt.

It wasn’t until I had this figure in hand when I noticed the details I missed in the comic, like this little knife in his utility belt and the small markings on his forearms.

To further distinguish this version of Batman from others, he’s got a collar on his cape and his boots seem to be thigh high? There are also fins/ scallops on the back of his heels. Very interesting design choices.

Even his cape has some frayed edges too.

Lastly, his bat-symbol has a very different style of design as well…

This figure is a bit shorter than the “main” Batman.

The figure’s alternate Bat-rope can be held with its hands but because his right hand is a fist, there’s nowhere to really properly loop the rope to.

He also comes with a grapnel accessory, which is very similar to the grapnel from the Batman the Animated Series. 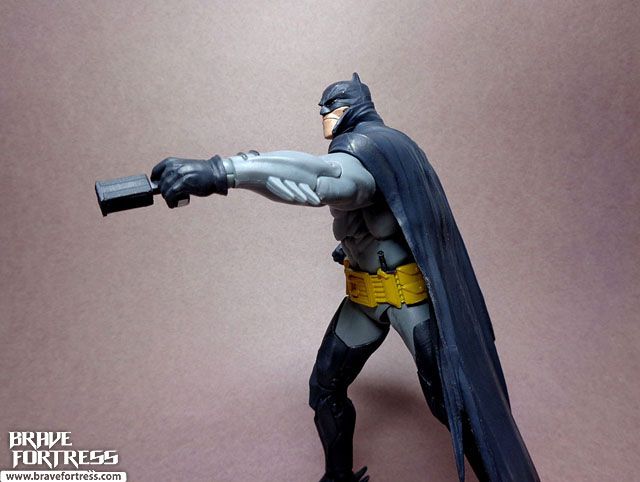 Overall, not the best looking, nor iconic Batman figure, but the White Knight saga is one of the best Batman stories in a while and since no one else is making figures based on that property, this particular figure is a must have if you’re a fan of the comic mini-series.