Mr. Fantastic and The Thing.

Wolverine’s head sculpt is pretty good, I can see in him the Berserker rage.

Forge!! Another new X-man is added to the figure line-up!

I can’t say I like the neck joint though.

Forge has a knack for inventing new gadgets and weapons.

Forge comes with an “angry” head. It’s really funny to look at. He’s got murder in his eyes!

For some reason, these pic makes me think of an angry Mexican. 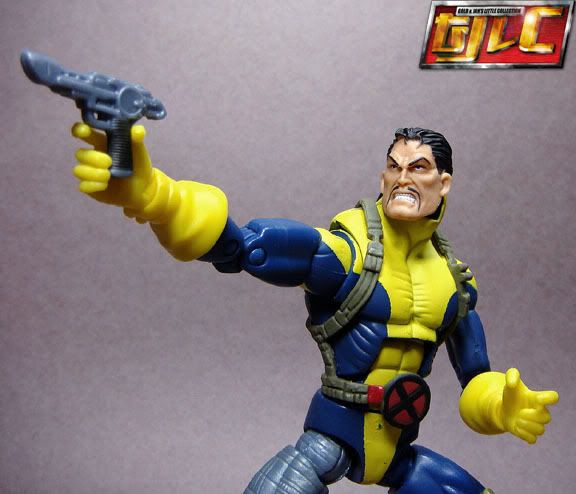 Forge: “Dammit, Logan! I told you to stay away from Storm! Rarrrgh!!!!” 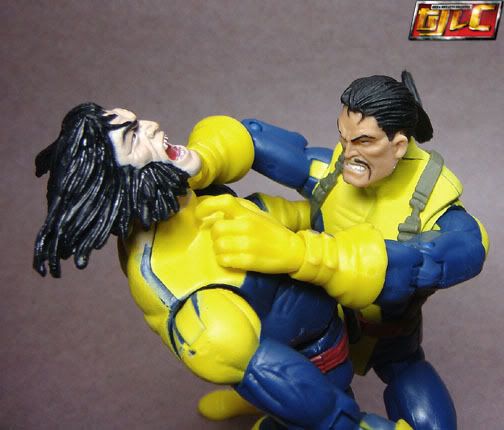 Forge’s angry head also goes well as a “P.O’ed” Tony Stark! But unfortunately, the movie Mark03 Ironman neck ball joint is a bit big, Forge’s head won’t fit, so in the pic, the head is just sitting there.

Capt’s shield is a bit bent. I guess it’s an improvement over the ML3 Capt’s boring, flat shield

With the backdrop accessory from old chase Red Skull.

In the Ultimates, Tony Stark presents Steve Rogers with a gift, from his own personal collection of antiques, Captain America’s old helmet from World War II.

Ultimate Nick Fury comes with 2 handguns and a rifle.

While the figure is awesome, I just can’t see Samuel L. Jackson in the figure (too old?) but instead I dosee Louis Gosette Jr. (“Iron Eagle”), plus I hate the color they used for Fury’s pants.

“Welcome to the Avengers Initiative” 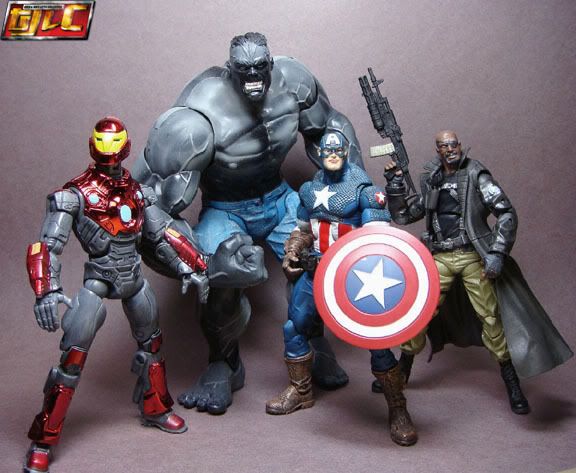 Ronin
Another fan requested figure is also made!

The nunchucks are a bit hard to squeeze out of the left hand, at first I thought they were sculpted into the fist, good thing they weren’t.

Hasbro did a REALLY[/i] great job with this figure! Very nice to look at.

Elektra’s “bandana-less” head can be used as “Echo(Maya Lopez)”, since the pegs do fit, but Ronin’s body is a bit big so it makes the Elektra head out of proportion.