The leader of Frieza’s elite fighting squad, the Ginyu Force. The good captain is the one that invents the crazy victory poses the team does whenever they want to “intimidate” their opponents before a battle, or when they want to dazzle their lord, Frieza, who seems to actually be impressed by their poses, no matter how awkward they look.

You can actually complete the seven Namekian Dragon Balls if you get all the members of the Ginyu Force, along with “Kid-era” Gohan and Planet Namek Bulma.

Ginyu comes with a Scouter equipped, for measuring power levels.

Taking off the Scouter doesn’t look good for the head though.

Speaking of heads, this guy uses the same kind of head swapping mechanism as Jiren, where instead of having to forcefully remove the head from the ball joint, we just have to lightly push up and get the head off this plate. 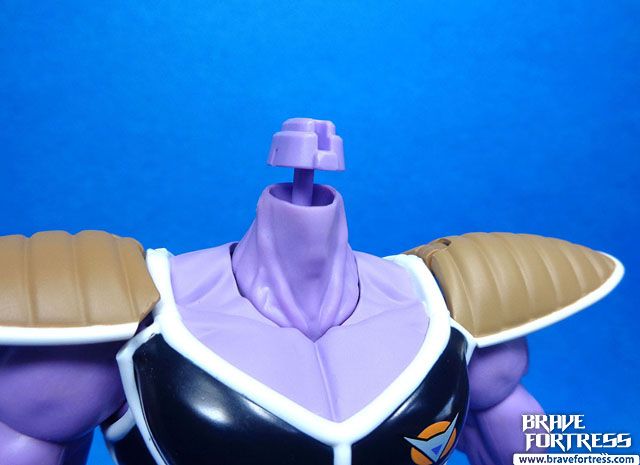 The many, many wacky poses of the Captain of the Ginyu Force.

These all happened in the Anime, FYI. They don’t really do much other than confuse the heroes since they’re not intimidating as the Ginyu Force thinks, but usually in the video games, they add a temporary offensive or defensive boost to the Ginyu Force fighter.

While doing the poses, be mindful of the hip skirts, they’re on really thin plastic pegs. I hope they don’t break easily…

Silly poses aside, Captain Ginyu is actually a very strong fighter and capable fighter. He’s able to even hold his own against Son Goku.

While it isn’t quite visibly apparent in the Anime, Captain Ginyu is quite tall, compared to Son Goku, standing at 7 inches, he’s roughly 1.5 inches taller than our hero (not counting the tip of Goku’s hair).

As incredibly strong as Captain Ginyu is (as he is the leader of an elite fighting force), its his secret technique that makes him truly fearsome. “Body Change” allows him to permanently switch bodies with his targeted opponent. He manages to surprise Son Goku and switch bodies with the Saiyan after losing his fight.

One drawback of this technique, however, is that even though the “Body Change” is complete, Ginyu cannot automatically bring the deeper powers and abilities of his new body into effect right away, regardless of what the host body has been shown to already be able to accomplish (i.e. Goku being able to do Kaioken). I guess it goes to show, it still takes training and effort to gain the true power. Pretty clever writing there, actually.

Lastly, Ginyu comes with an alternate “damaged” chest plate and a proper “Scouter-less” head, as seen from the scene in the series where he damages his body on purpose before swapping with Goku to leave Goku stuck in a broken body.

Overall, I love this figure. I’m really glad Bandai got around to making him, as I was contemplating on getting the Third Party “Demoniacal Fit” Captain Ginyu Figure. This totally blows that one out of the water thanks the better tooling and increased articulation. The best part is, Bandai is also releasing the other members of his squad too! So the gang’s going to be all here.