Conan Edogawa, a seemingly ordinary first-grader, is really genius teen detective Shinichi Kudo. After being caught and poisoned by the criminal “Black Organization” group, the poison shrinks his body down to that of a young child. He retains his keen intellect and still solves crimes, hoping one day to take down the organization and find a permanent cure to his condition.

He comes with various new facial expressions that weren’t a part of the previously released set.

Finally, he comes with his “good grief” look.

Created by his “crackpot inventor” neighbor and close friend, Doctor Agasa, the tracking glasses and skateboard (along with other clever gadgets) are a huge help to Shinichi in solving crimes and foiling bad guys.

Surprisingly, Conan’s feet have magnets in them, so he can stay on the board very easily. Nice touch here, Bandai!

In the series and movies, Conan is surprisingly very skilled at using the skateboard, capable of pulling off the craziest of stunts, even though he should only have the physical core and muscle strength of a 10-year old child.

Speaking of more gadgets, Conan also comes with his Detective Boys group’s Detective Badge, another of Doc Agasa’s inventions. It functions as a two-way transmitter, so he can communicate with his friends and as a tracking device and even has a flashlight function.

The wrist watch and “trigger” right hand are the only accessories that are similar between the first and second S.H. Figuarts Conan sets.

The main figure is essentially the same, except for the new magnetic feet and newer facial expressions and accessories. 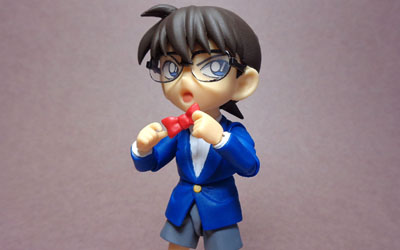 With other Case Closed figures. 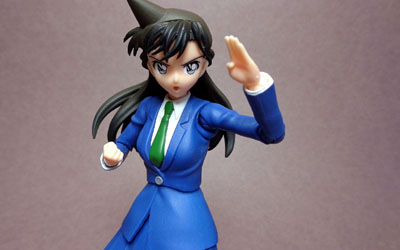 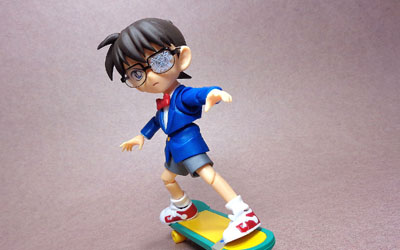 Overall, while I think both this and the previous S.H. Figuarts Conan Edogawa figures are good, the previous release is the one to get, since that comes with the voice changer bow tie and you’ll need that more than the tracking glasses and skateboard when it comes to interacting with Kogoro Mori. So you have to choose just one, than that’s the one to get.