Originally one of Goku’s deadliest adversaries in the World Martial Arts Tournament in the original Dragon Ball saga, Tenshinhan eventually becomes a force for good and fights alongside Son Goku and his friends in defending the earth.

The design of this figure is based off his appearance in the Androids/ Cell Saga of Dragon Ball Z.

Ten was once the top pupil of Master Shen’s Crane Martial Arts school, the main rival of the Master Roshi’s Turtle School of Martial Arts. Previously cold and ruthless thanks to Shen’s teachings, he started having a change of heart and became honorable after battling young Son Goku in the tournament.

His main attack is the Dodon Ray.

He can also use the “Solar Flare” technique to temporarily blind his opponents, a technique he easily learned after seeing it used only once in the original Dragon Ball saga.

His ultimate attack during the Androids Saga is the “Tri Beam”. Unfortunately, overuse of this attack will take a severe toll on his body, even kill him.

I decided to use a third-party Soul Stage to recreate the scene when Ten used his Tri Beam attack on Cell.

Ten’s fellow Crane School student and faithful companion. Chaoz follows Ten everywhere. His appearance is unique for Earthlings. For unexplained reasons, he resembles a “Jiang Shi” (a vampire from Chinese mythology) and seems to be the only one of his kind. He and Ten both have the “mimicry” technique learned from the Crane School of Martial Arts, where they can immediately copy any move an opponent makes (he used the self-destruct attack on Nappa after seeing a Saibaman do the attack on Yamcha in the Vegeta saga).

The figure is a ridiculously huge improvement over the previous release which had almost no articulation.

Chaoz’s alternate hands are ridiculously small, be careful not to lose the pieces!

Apart from the Dodon Ray, Chaoz also uses telepathy to move large objects (such as boulders) and toss them at his opponents. 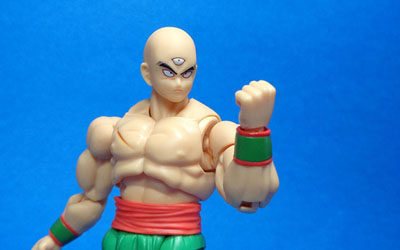 Overall, A pretty sweet “upgrade” from the previous release. While Tenshinhan does come with a better head and body sculpt, the real purpose of this set was to release a proper Chaoz, and Bandai delivers! Not only is it articulated, it even comes with various hands to boot. With this set, we more or less have a proper team of Dragon Ball Z heroes to display!